Magicians have mesmerized people all around the world with their mind-bending tricks and death defying feats. They are the entertainers and performers that leave us in awe. At the Art Gallery Ontario’s (AGO) newest exhibition “Illusions: The Art of Magic”, there’s more than meets the eye. The collection of rare magic posters transports visitors back in time to the Golden Era when magicians travelled the world with their hidden secrets and their wildly popular and colourful personas.

The exhibition features more than 55 posters from the Allan Slaight Collection from the McCord Museum, alongside photos, documents as well as objects that belonged to the most famous of them all, Harry Houdini. The collection shown here at the AGO is just part of Canadian businessman and magic enthusiast Allan Slaight’s collection that includes over 600 posters and more than 1000 documents and rare books on the subject. “He had a love for magic and was an amateur magician. As a philanthropist and lover of the arts this specific niche of art captivated him,” said Nadia Abraham, interpretive planner of the exhibition.

The Magicians of the late 19th century and early 20th century performed all over the world and it wasn’t only the tricks that drew the crowds, the posters themselves proved to have power and allure. The magicians were performers but also very business savvy. Imagery used from playbills to large advertising posters played to the audiences’ fantastical expectations and fed their curiousity. Themes and symbols included skulls, demons, owls, and rabbits that all represented something mystical and magical. The posters, themselves, have a story to tell. At the exhibition, visitors can create their own digital poster with many of the symbols explained.

The exhibition is shown in themed sections much like how it is displayed at the McCord Museum including Houdini, Spiritualism and Mental Phenomenon, Fright and Delight, Appearance & Disappearance, Meet the Magicians. However, the exhibition at the AGO includes two additional features: Women in Magic and Cultural Appropriation. “We felt the two were quite important to include in our show especially around some of the imagery that is shown in the posters,” said Abraham.

The story behind magician Chung Ling Soo is particularly interesting as we learned about his popularity during the time when Eastern cultures were a fascination to the western world. Performers exaggerated and several fabricated their personalities to cash in on the trend. 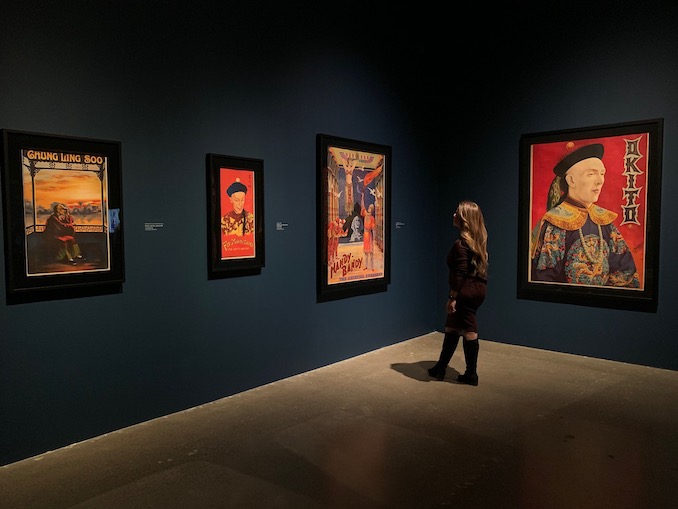 “We really hope when people visit this exhibition that they feel like they’ve been transported to another time and really understand the unique intersection of the performance art, the art of advertising, and how the two collided in the Golden Age of Magic. It’s beautiful, outrageous images are shown in the posters,” said Abraham. “That collision of art forms in this exhibition makes it all so interesting. The magicians were their own publicists, hype-men, they really just did what they had to do to get people into their theatres night after night. These posters are really a reflection of their artistry.

Illusions: The Art of Magic exhibition is at the Art Gallery of Ontario until May 17, 2020. A number of talks and events will also be offered during the exhibition run including Toronto-based magicians David Ben, who will deliver a talk that will be sprinkled with magic. March Break programming will also include a number of activities and pop up magic for families. For a complete schedule and more information about the exhibition visit www.ago.ca

Papyrus is an unassuming restaurant located on the Danforth. There are a few tables out front is just like any […]