Living in the city means we have options and when it comes to our furry friends I’m constantly amaze at the entrepreneurial spirit of many.

For someone who doesn’t drive, getting around the city isn’t always as easy as it seems when you have a pet. Well, let’s face it, it’s just not always easy to get around Toronto for anyone, nor is it always affordable.

Public transit allows for pets during off-peak hours and honestly, that’s okay. Realistically, who would want to bring their pet on a crowded bus or subway anyway? Unless you have a certified service dog and you have no other affordable option, of course. Also, not all taxi, Uber or Lyft drivers are willing to take pets. Understandable again. Reasons range from allergies, left behind pet hair, and simply the fear of animals.

In a big city like Toronto, there are less than a handful of reliable pet friendly ride services. Your Dog Butler is one we had a chance to recently check out. 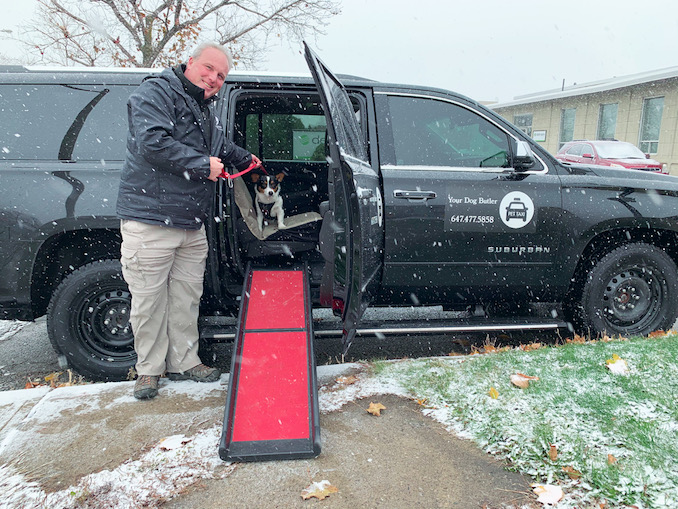 Like many small businesses, Your Dog Butler started out of necessity. The family’s pet needed to be picked up in an hour from the groomers but at that moment both drivers in the family couldn’t get out in time before it closed. It was a scramble but at that moment they thought about how handy it would be if there was a service that could help pick up and drop off in a pinch.

Then, there were times when some friends asked for favours to help them out in transporting their pets.  As a family of animal lovers, they were of course, happy to help out.

The first favour happened when a an elderly woman and her dog were denied a ride by a taxi driver even though the dispatcher ensured them that everything would be fine. The call came in  from a relative of the woman asking for help. They began to wonder if this could be a viable business. He and his family began researching the options two years before launching. One priority was getting the right  insurance policies in place when transporting pets. Mark tells me that drivers for pets need to have additional insurance to use their vehicles to pick up and drop off their furry clients. Most drivers with ride share companies are only insured for human passengers and that’s part of the reason they refuse pets.

The business began through word of mouth and setting up booths at dog-friendly events. I met Your Dog Butler at the Barkworks event at Evergreen Brickworks in the Spring. Mark tells me one of his earlier customers was in the film industry called him up and wondered how far he would drive. He ended up driving the dog up to Muskoka as the client needed to do site visits for filming but required the dog to trail along. So, Mark took the dog in his vehicle and was responsible for ensuring Rufus (not his real name) was comfortable and pit stops along the way. By the way, Mark didn’t disclose if the dog was an actor. That’s confidential. But since then, he’s had many referrals coming from the entertainment industry.

Customer service is constantly on his mind for both the human and the pet. He’s transported a variety of animals including dogs, cats, guinea pigs, chinchillas, and turtles. Vehicles are cleaned in between each ride. Your Dog Butler is also affiliated with a cat rescue and he tells me they sometimes help transport two each week.

So, who’s their clientele? You’d be surprised. While it sounds luxurious taking a pet to cottage country many of the clients are city dwellers that need to get around and don’t want the added stress wondering if their ride would be declined or who the people are tending to their furry family members. Pets can travel on their own with the driver or humans are most welcomed to accompany them. On the ride I needed them, I had also put in the request to add an additional drop off at the airport after taking my pup to a boarding facility.

Mark tells me that clients often book their car service to take their pets to vet appointments, groomers, visiting with grandma and even weddings. They even offer dog walking service if requested. People often find the service helps save time and is less stressful. In case of emergency calls to animal hospitals, for example, they have stretchers to help aid with discomfort. Something I had not hear in the past. Good to know!

They currently have three vehicles and several trained drivers on the road and is looking to expand as business continues to grow steadily. The Suburban vehicle that showed up, yes is a little swishy, was set up for my pup to either ride in the back or seated latched in the passenger area. Both areas have a few toys for dogs to play with if your dog chooses. It’s the pet owner’s choice. There’s also space to put in a transport kennel or crate based on individual needs. They are accommodating on whatever you, and your pup are use to.

The vehicle comes with steps or ramp for pets to get in and out of. When the driver arrived the morning to pick us up, they also brought my dog out for a little tinkle before bringing him into the car. There was no rushing out the door and into the car. Priority is given to the pet to ensure their safety and comfortable every step of the way.

Booking was done easily online or customers can call into request. Advance notice is always ideal but they have accepted emergency calls. They also service the GTA and well, Muskoka if you need!

Speaking of taking care of every step, Your Dog Butler is truly a door-to-door service. Mark walked my dog right into the boarding establishment  and announced his arrival at check in and ensured my little buddy was secured in place. It’s the little details that matter.

As for pricing, that’s something that is confirmed prior to the trip based on the information you provide. Payment is done in advance to secure the ride. Confirmation is sent and you will also receive notification of who the driver is prior to pick up. My ride to the boarding and then to the airport was on par with taking the usual car services like Aerofleet but I don’t have to worry about being denied a ride because of the pup.

In addition to the pet taxi service, they also provide a dog walking service that’s reliable as well as running any pet related errands like picking up supplies and food if needed.

The experience with Your Dog Butler was truly exceptional. It’s very clean, safe, friendly, and efficient. Find them at www.yourdogbutler.com

Midtown Toronto has been experiencing a wave of new openings  in most recent years. Life continues to move forward and […]

Five of our favourite installations at the 2018 Toronto Light Festival

One of our favourite outdoor events in the city is the Toronto Light Festival. It’s considered one of the largest […]