Those who claim to be social justice and poverty advocates often are the first ones to object when the issue of homelessness and addiction confronts them directly or moves into their backyard. The people of Peterborough are getting a direct education in cause and effect since tent cities started appearing in city parks, and they are failing the tests of basic decency and empathy. 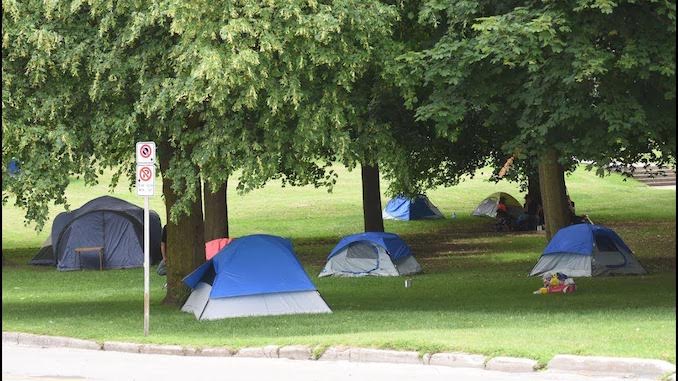 Instead of attacking those who live in tent cities, let’s explore and debate the lack of affordable and community housing, the cuts in social services spending, and the lack of mental health services on a provincial and local level. Petitions to close tent cities do not solve the issues that have been exposed. By-law changes to park regulations do not build new housing units. Increased police presence and enforcement does not change the fact that one in five households in the city have an after-tax income of less than $30,000 – far higher than the provincial average. Directing anger at the homeless does nothing to change the fact that census numbers on core housing needs (spending more than 30% of total household income for shelter costs) reveal that housing insecurity is steadily growing in Peterborough and the surrounding area. NIMBY solves nothing, it only places the blame and onus on the most vulnerable among us.

The 2016 Census showed that no new apartments or condominiums were completed in Peterborough that year, and a 2018 City of Peterborough report shows that none were completed in 2017 either. Combine that with a low rental turnover and vacancy rates, a supply shortage in housing sales with the average sale price in Peterborough at $458,583 (an increase of 5.7% from 2018) meaning even more people are being pushed to the edge of homelessness and housing insecurity in the Kawarthas.

We reached the tipping point for this crisis when the Warming Room, a local shelter, was closed after its lease expired, forcing 40 people onto the streets. This was well-known in advance, yet city and provincial officials seemed caught off guard and unprepared. Despite opening additional shelter space at the local library, communication between the city and Peterborough’s homeless community seems to be lacking, as many of the homeless are hesitant to use the temporary shelter for many reasons.

Tent cities are merely a visible symptom of a much larger problem, and their residents make a convenient scapegoat for existing community complaints about crime and drug use. It forces us as a community to confront an inconvenient truth about our lack of political will in dealing with homelessness as not just a mental health, poverty, housing insecurity, or an income inequality issue rather than a combination of all these issues. This is not a time to play politics, this requires planning and cooperation between all levels of government that doesn’t seem possible in a federal election year, and a growing ideological divide between Ottawa, Queens Park, and Peterborough City Hall. Community meetings do nothing in a time when bold action and immediate planning is required. We require leadership, not posturing for votes.

A society is judged by how we treat our most vulnerable, and by that measure the city of Peterborough is failing. There is in ingrained lack of empathy evident in the public reaction to the tent city, as well as a lack of understanding in the root causes that led us here. This is a canary in a coal mine situation, and it is time that we collectively start digging to prevent an oncoming affordable housing disaster – not only in Peterborough, but across Ontario.

I think that we have to approach the issue of affordable housing and homelessness without ego and ideology, and instead with the understanding that any one of us could be in the same situation as those living in a tent city with a change to our financial and employment circumstances. Somewhere along the way, we have lost the ability to walk a mile in the shoes of those we so readily criticize or fail to understand. It may take a village to raise a child, but does that village not have the same responsibility to care for that child as it reaches adulthood?

The problem of homelessness is like peeling an onion; so many layers and complexities that cannot be covered in one post. The lack of empathy and compassion towards Peterborough’s tent city residents also intersects with the cruelty shown by the Ford government in relation to its treatment of parents with autistic children and cuts to legal aid, for example. It also weaponizes a widespread meritocratic discourse and criminalization of poverty as a means to stigmatize and demonize the vulnerable to justify doing nothing or to promote austerity.

Homegrown Business: The Abode by Craig Thompson and Martin Muhs

Craig Thompson and Martin Muhs, Co-Founders of The Abode, about how they provide an additional, defined and dedicated personal space. […]