I have been thinking a lot lately about the Overton window. I am beginning to apply it to long term strategy being employed by Conservative thinkers/politicians in Canada, and what I like to refer to as the long con. 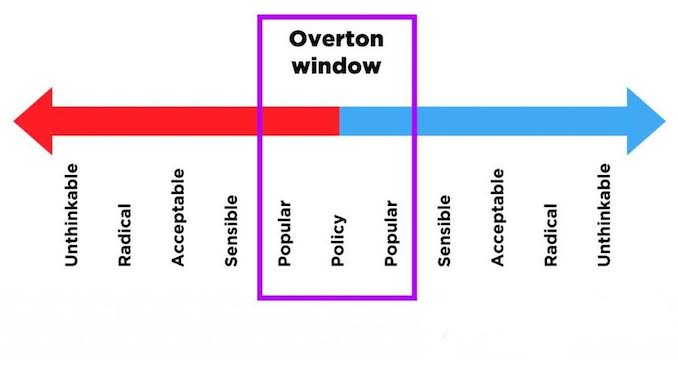 No matter how hard a political party campaigns for a policy deemed as unthinkable, as it falls outside the window, that policy will inevitably fail.

But how does this apply to a long con, you ask? And how does it apply to the Conservatives? The long con started with the creation of the Reform Party – who advocated for policies on the far right that were unacceptable to Canadians. This is old news, and the Reform Party only marginally pushed the Overton window right, but it had started. Stephen Harper and the merged Conservative Party of Canada moved it a little further right, especially when paired with a hawkish center-right Liberal leader like Michael Ignatieff. It wasn’t until Harper was contrasted with a more left leaning Justin Trudeau did it show Stephen Harper’s exposure to being outside the Overton window.

The advent of far right groups (Yellow Vests Canada), right wing/leaning media (Rebel Media, Post Media), and political parties in Canada (Bernier’s People’s Party) have been pushing the Overton window as far out of balance as I have ever seen it. The extreme political policies of far right groups in Canada are allowing the Conservative Party to move the Overton window right by advocating for similar policies as those on the far right, but stopping short of extreme views to seem moderate in comparison. With a weakened NDP that seems to be unable to effectively counter the far right, or push the Liberals to the left, the Overton window is moving away from balance – pushing what was once radical/unthinkable to the realm of the politically possible.

I find this trend extremely worrying. We need the Liberals to start pushing big thinking left side of the spectrum ideas like a fully funded national Pharmacare program, or a national childcare/daycare strategy. Yes the NDP are pushing for those ideas, but they have not been as big a factor as they were in the past – especially with the disaster of Jagmeet Singh’s leadership, and Thomas Muclair’s move to the political center in the 2015 election campaign.

The Carbon Tax was once a policy championed by Conservative/Republican political parties, in fact employed to help combat the acid rain crisis in the 1980’s. With the demise of the Progressive Conservatives and rise of the Reform Party, Canadian conservatism took on a strong western bias, nearly completely beholden to Oil and Gas interests. Conservatives in Canada now fight the Carbon Tax with a existential fervor once reserved for taxation, and the Carbon Tax has become a tool to combat climate for those on the center-left. That is a perfect example with how the Overton window has moved to the right on environmental issues.

I once viewed politics as cyclical in nature, but I now feel that is no longer the case. This push to the extreme right by Conservatives in Canada has me thinking in terms of the Overton window, and how the window is being moved right – and how that was the plan all along. That was the purpose of conservative media organizations, as well as astroturf organizations like the Fraser Institute and Canadian Taxpayers Federation – to lend legitimacy to the efforts pushing political conversation right in slow enough increments that the electorate would not notice and it becomes the norm.

Who would have thought that we would see the day where private delivery of public health care services would become an acceptable conversation to have in Ontario, like the Doug Ford government is now having. When you view it through the lens of the Overton Window, you see the Harris Government starting to move the window with its cuts to health care, municipal amalgamations, and hospital closures that have lead to the manufactured crisis Ford is referencing in his justification to attempt Privatization. This push for privatization was a long con that started years ago. We will see it nationally in the future with Conservative moves to privatize the Canadian Pension Plan and adopt industry created solutions to Climate Change that we know will fail.

At some point the word socialist or leftist became a dirty word, but we need a reinvigorated left. We need the return of big ideas, new initiatives, and mass protest from the left/centre-left to move the Overton window back to balance. If government, political parties, and media are failing us or refusing to see the long con game being played by Conservatives – it becomes incumbent upon us to demand those big ideas and initiatives that once was commonplace in Canada to retain the balance that creates good national policy, and not cater to special interests and niche political movements.

Will The Real Andrew Scheer Please Stand Up

Who is Andrew Scheer? It has been two plus years since he became leader of the opposition and Canadians are […]