It’s not often you have a chance to meet a Sake Samurai. There are approximately 70 people in the world recognized with this distinction. Toronto’s Michael Tremblay was recently honoured with this title. For someone to have this distinction is the result of years of learning, commitment to the history, culture and the art of sake making, and yes, passion.

For over 20 years, Michael Tremblay has travelled the world using wine and sake as a lens in learning about the history and culture of various regions.  He began his formal wine education with the International Sommelier’s Guild before finding a passion for sake, Japan’s ancient national beverage. In 2010 he trained with world renowned sake educator John Gauntner in New York and Tokyo and became Ontario’s first certified Advanced Sake Professional. He continues to travel to Japan and work in the country’s most renowned sake breweries and learning from the Toji (master brewers). He’s been invited judge various sake competitions in Japan and London.

Here in Toronto, he’s organized the Toronto International Sake Challenge where he has evaluated 200 sake samples along side five other esteemed judges. He tells us there’s an international competition coming up where he will be judging 2000+ sake.  Tremblay also teaches those who are interested in learning about Sake both formally and informally.

Tremblay is also the Head National Sake Sommelier for Ki Modern Japanese + Bar in Toronto where he manages the largest sake list in Canada. Here is where us lucky Torontonians are able to tap into his wealth of knowledge and hear his incredible stories.

Recently we were invited to explore various regions of Sake with Tremblay along with Ki Modern Japanese’s newest menu offerings. By the way, Ki hosts several special event dinners throughout the year including the upcoming “Sherry + Sake” dinner collaboration with Cava Restaurant on November 8.

At the dinner with Tremblay, there were sake experts right through to those who casually enjoy a cup. He didn’t mind the range of knowledge and that’s what he says is fun about what he does. Tremblay is equally excited for the opportunity to introduce curious minds as he is with discussing the complexities and what’s new with those who are well-versed. He’s making Sake accessible to everyone and definitely someone we enjoy chatting with.

We had the honour of learning more about Sake, its origins and future, along with finding out about his Sake Samurai recognition.

We know that Sake is steeped in Japanese culture and history. In a nutshell, can you tell those, who are not familiar, why it’s gaining more popularity here in North America?

MT: While sake has been quite popular in large markets like New York and Los Angeles for quite some time now, Toronto’s love for it has really seen growth in the past decade.  The reasons for this growth are from a combination of factors really.  First, the growth of sake education is a key factor.  Consumers need to understand the Japanese terms that refer to the grades and styles, and have it demystified, for sake to grow in popularity.  At Ki, for instance, we had to invest in raising the bar of sake knowledge among our wait staff in order to grow our sake list from 20 to 60.  In addition, sake tasting events like Kampai Toronto- Festival of sake brought hundreds of consumers together for sake seminars and tastings of hundreds of sakes accompanied with sake brewers and experts who flew in from Japan to pour their sakes.

Second, the increasing variety of sake available helps with sake’s growing popularity.  Consumers have a lot more options / choices when purchasing sake then they did 7 years ago.  In Ontario, there are more sake importers now, representing many many more sake breweries, than a decade ago.  New brands and sakes brings a fresh injection of excitement among consumers and engages new budding sake enthusiasts also.

Sake can be enjoyed warm or chilled, but what should people know?

MT: People should know that sake is incredibly versatile.  You can take the same sake and serve it chilled and warm which changes its profile and can be a lot of fun to experiment with, especially when pairing with food.  In a nutshell, warming sake works best with sakes that are cereal driven in profile.  That means, Honjozo and Junmai, where more of the rice is used in the fermentation process, and thus are rich, cereal,  umami-filled sakes, are great warm because the increased temperatures bring out these rich, ricey characters in the sake.  On the other hand Ginjo and Daiginjo sakes, where the rice has been polished to 60% and 50% of their orginal size, typically are less cereal driven and tend to have a fruity profile and light palate.  These can be very wine-like in profile and serving them chilled is a good way to preserve these fruity characters.  At the end of the day, however, there isn’t a good or bad way to enjoy sake, and that’s what makes it such a great beverage to drink!

Tell us more about cloudy sake?

MT: Nigori-zake, or cloudy sake, is roughly filtered sake that has a degree of sake lees, the dissolved rice particles left over from the fermentation process, left in the bottle.  These can be lightly cloudy to full on textured and thick with rice. The most important thing to remember is that all sake has to be filtered to be legally called sake.  What I love about nigori is its visual representation of how sake would have looked hundreds of years ago, when households would have made sake at home and retained and left the rice lees inside since rice was such an important (and expensive) commodity back then.

What other varieties are out in the market?

MT: There are all kinds of specialty styles available to consumers.  There are several sparkling sakes made like Prosecco or Champagne.  There are fruit infused sakes in strawberry, yuzu (Japanese citrus), and ume (Japanese plum) flavours to name a few.  There are aged sakes, called koshu, available albeit in tiny numbers that exhibit unique, sherry-like flavours and aromas.  There are sweet dessert sake styles called kijoushu.  Lastly, there are unpasteurized sakes, called namazake, available.  Japanese nama is quite rare but Toronto’s Izumi sake, made in the Distillery District, makes fresh unpasteurized sake that is worth trying.  In addition, there are umami-filled sakes made in the old Edo era ways of making sake called kimoto.  This, of course, doesn’t even explore the range of profiles created by using the differences in sake rice (there are over a hundred sake specific strains used) and yeast (there a many many options that brewers use).  The options are endless really.

What about the drinking vessel? Sake cups are traditionally small. Why is that important?

MT: Great question!  Small ceramic sake vessels are called ochoko.  They are small because they embrace the Japanese tradition of pouring for others but not yourself.  The little cups mean there is a constant flow of giving to one another throughout a meal, which is a lot of fun.  With that said, keep in mind that wine glasses can easily do the trick if these aren’t handy.  There are no hard and fast rules in what vessel you should (or should not) use. 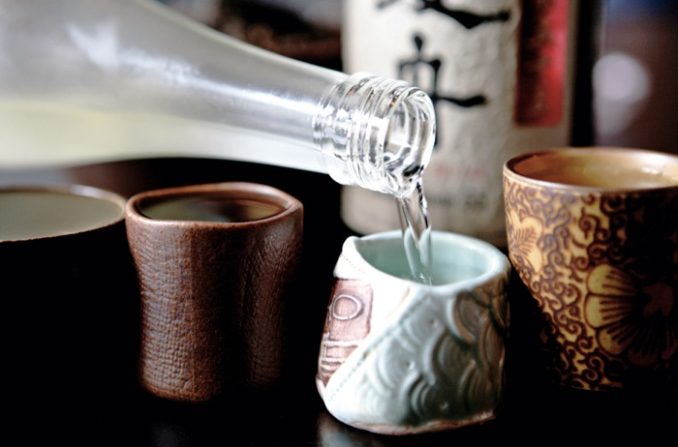 Tell us about your recent and distinct recognition and what does it mean?

MT: I was recently inducted as a Sake Samurai, a distinction. I was invited to Kyoto’s Matsuo Shrine (one of Kyoto’s oldest shrines with 1300 years of history) to receive the honours.  The voting members are actual sake brewers from all over Japan.  The distinction recognizes individuals from around the world and in Japan that have been working hard to spread the joy of sake and educate consumers.  There are approximately 70 or so that have received this distinction, so it’s a huge honour to receive.

Obviously we associate Sake with Japanese cuisine, but what else does it pair well with?

MT: As I mentioned earlier, sake is incredibly versatile.  You can serve it at a wide range of temperatures.  You can make cocktails with it.  You can cook with it.  It lends itself to so many things.  Pairing with food is an exceptional strength for sake.  It is quite a subtle beverage at the end of the day, and tends to blend with food and create harmony, or subtly support a dish, than over-powering it.  While it goes with all kinds of Japanese dishes, many of which are problematic for wines to cope with, it is great with international cuisines (French, Italian, Thai to name a few) and also with cheese and other specialty foods.

We think about Sake from Japan but there are several that are made in North America, including Toronto. Can you tell us about them?

MT: There is a growing number of sake breweries that are starting to make sake from outside Japan.  Two of sake’s most important ingredients are rice and brewing water.  So, if a new brewery has access to these then there is potential for making good sake.  Toronto’s Ontario Spring Water Sake Co. resides in the Distillery District and opened about 7 years ago.  Their flagship brand is called ‘Izumi’ which means spring water in Japanese.  This refers to the pristine water they source from a spring near Huntsville.  In addition, the brewers work to purchase good sake rice from California.  The sake they produce is tailored to consumers that are new to sake and enthusiasts alike.  It bridges the gap between Japanese sake and wine which is great for engaging new consumers.

For someone who wants to sample sake in the city, where are some of the best places you would recommend?

MT: Of course I am biased, but our sake program at Ki modern Japanese + bar is wonderful.  We have 10 sake experts who are excited to talk sake with our guests.  We also have an amazing sake flight for Sake Day that we are running for a few weeks to celebrate sake throughout the month.  Apart from Ki, visiting the Ontario Spring Water Sake Company is a great chance to try fresh-pressed sake flights of single tank sakes which is very interesting.

The Queen’s Ball: A Bridgerton Experience arrives in Toronto

Wondering where you can take in the Royal Wedding of Prince Harry and Meghan Markle this weekend? David Mirvish has […]