On June 23rd, Indigenous Day Live on APTN will feature day long coverage of events in the cities of Winnipeg, Toronto and Ottawa, all in recognition of National Indigenous Peoples Day which takes place on June 21st.

National Indigenous Peoples Day was originally called National Aboriginal Day when it was first celebrated on June 21, 1996. The day came to be through a proclamation by then Governor General Roméo LeBlanc. On June 21 st, 2017 the Government of Canada
announced its intention to rename this day National Indigenous Peoples Day. The APTN coverage has also followed suit. 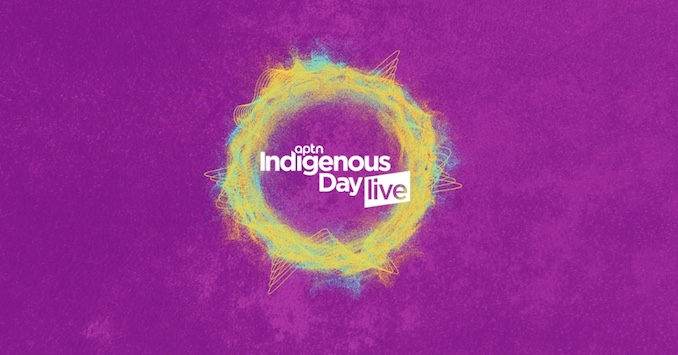 “APTN’s Aboriginal Day Live has grown to become the largest celebration of National Aboriginal Day in Canada – which will now be known as National Indigenous Peoples Day as of June 2018. In the spirit of collaboration and continued alignment to this very important day of recognizing Indigenous Canadians we have decided to rename our event to “Indigenous Day Live.”” – Jean La Rose, Chief Executive Officer, APTN

The Toronto event is part of the Toronto Indigenous Arts Festival, a free, annual celebration of traditional and contemporary Indigenous music, dance, theatre, storytelling, film, crafts and food that runs from June 21st to 24th at Fort York.

We chatted with a representative from APTN to learn more.

Does the government help out with funding for these events?

The Government of Canada has made a contribution to this year’s event through the Celebrate Canada Program. Celebrate Canada provides funding for activities organized on National Indigenous Peoples Day, Saint-Jean-Baptiste Day, Canadian Multiculturalism Day and Canada Day.

APTN has received steady and varied funding support from the Canadian Government through the years. In 2017, the Canada 150 commemorative fund allowed Indigenous Day Live to expand to 8 Canadian cities, making it the largest National Indigenous Peoples Day celebration in history.

APTN must seek other partnerships and support from different government and non-government corporations to offset the costs of the celebration and production of Indigenous Day Live. Since its launch in Winnipeg, the event has benefited from support and collaboration from local, regional and national groups and communities wherever it has set foot.

Tell us a bit about the programming for the day.

At noon – central time – APTN will broadcast on national TV Indigenous Day Live’s round dance simultaneously from Winnipeg, Ottawa and Toronto. For the occasion we invite everyone on site to join hands, follow the beating of the drum and enjoy the beauty of the song in a show of solidarity.

APTN Reporters will be on location and doing live hits into APTN programming throughout the day.

Later on, APTN will broadcast the live evening concert on its four television channels, online and on the airwaves through its partnering Indigenous radio stations.

First Nations, Inuit and Métis Peoples will come together on stage to create an unforeseen production of contemporary Indigenous expression. The show will feature key performances, intercut with on-stage and backstage hits by the hosts. Each of the three stages will be introduced in turn.

The three host cities concert and pre-show will be broadcast in full online. Every performance, from every artist, from each of the stages, available for viewing to all of Canada and beyond at indigenousdaylive.ca

In addition, APTN National News reporters will be on site doing live hits from each location throughout the day.

The final details of the broadcast will be announced in May. For more information visit: http://indigenousdaylive.ca/

Can you tell us a bit about the history of Indigenous Day Live (previously known as Aboriginal Day Live)?

Indigenous Day Live (previously known as Aboriginal Day Live) has been held annually since 2007 and is the largest celebration of National Indigenous Peoples Day and the summer solstice in Canada. APTN presents a free day-time program of activities and evening concert in Winnipeg, MB, setting up a twin stage across the country for most years. In 2018, eight cities across the country hosted IDL (Halifax, Montréal, Ottawa, Toronto, Winnipeg, Edmonton, Vancouver and Yellowknife). In 2018, IDL will be hosted in Toronto, Ottawa and Winnipeg. The live multi-platform concert broadcast will be available to all Canadians and beyond via APTN, radio waves and online. To join the conversation anytime use the #IDL2018 hashtag.

IDL is a celebration of Indigenous Peoples’ cultures and heritage and the summer solstice in Canada. It brings Canadians together to acknowledge Indigenous Peoples’ accomplishments, through cultural activities and live music while contributing to the nationwide movement of reconciliation. The live concert features the best and brightest Indigenous artists from across North America – up-and-coming as well as award-winning artists.

Name changes over the years:

Cities that have hosted or will be hosting Indigenous Day Live:

2011: The celebration in Winnipeg saw 30,000 people in attendance throughout the day, and more than 200,000 people across Canada tuned into the live broadcast on APTN and APTN HD.

2012: Viewership numbers saw a significant increase in numbers in 2012 – more than 300,000 viewers tuned in to the live broadcast on APTN. In addition, the live feed of the concert was provided for free to Indigenous radio stations so they too could share/broadcast. This built a strong partnership with 9 stations for a total reach of more than 637,000 listeners.

2013: More than 220,000 people across Canada tuned in to the live broadcast of Aboriginal Day Live on APTN East, West and HD.

2016: 10th year anniversary – Attendance was more than 45,000 in Winnipeg and the multi-platform delivery reached an audience of more than one million.

2017: IDL was hosted in eight cities across Canada, including Halifax, Montréal, Ottawa, Toronto, Winnipeg, Yellowknife, Edmonton and Vancouver, making it the largest celebration of National Aboriginal Day (now known as National Indigenous Peoples Day) this country has ever seen. The live multi-platform concert broadcast was available to all Canadians and beyond via APTN, radio waves and online. Viewer statistics reached 427,000 through the TV broadcast, with 16,361 online viewers, ten radio networks broadcasting to 1,097,000 potential listeners for the total combined reach of over 1.5 million across all platforms. This was a 7-hour multi-platform broadcast from 7:00 p.m. – 2:00 a.m. ET.

How can local businesses get involved?

Artisans interested in sharing their unique talents, food vendors who want to delight attendees with their traditional edibles, and non-profit organizations and small businesses looking to have a presence at the Toronto celebrations can visit our partner’s website to obtain information on their Artisan/Vendor intake.

Indigenous Day Live has a broad range of national and regional partnership opportunities available. Committing to a partnership means that businesses and community organizations can get their message out to a far-reaching audience while supporting an important cultural event.

All the information on how to get involved can be found by visiting http://indigenousdaylive.ca/get-involved.

What other support can our readers give?

APTN is always grateful to receive support from its host city in many forms.

The best way to show support for Indigenous Day Live is to join us at Fort York on Saturday, June 23rd. To recognize and celebrate the unique heritage, diverse cultures, and outstanding achievements and contributions of First Nations, Inuit, and Métis Peoples by attending an event that inspires reconciliation.

Torontonians are also invited to spread the word in their work and family circle. All can join the conversation online by following and tagging publications with #IDL2018.

People may also reach out to our partner, the Toronto Indigenous Arts Festival, to find out their needs.

Below you will find information about the Toronto Indigenous Festival, the festivals media contact person and link to their website:

Another way to support this celebration is to come to the Toronto Indigenous Arts Festival on June 23rd and 24th and by using the hashtag #IAF2018.

Communicating with our loved ones who have passed is something I’ve thought of, especially in most recent weeks. Without a […]