There are many tattoo artists in the world that do incredible work but not too many reach superman status quite like JonBoy. Follow him on instagram and you can see how popular his work is. The New York based artist is known for his fine lines and softer more sophisticated work. It also helps that he’s a got a few celebrity friends like Hailey Baldwin, Kendall and Kylie Jenner and Bella Hadid who have catapulted him into global rock star status. Just ask the hundreds who lined up recently at Yorkdale Shopping Centre’s Concept Pop Up in hopes of meeting him and possibly getting inked in the limited time he was there. The mall announced his appearance two days ahead on social media. The first fan arrived at the shopping centre at 6:00 am on day one. He wasn’t expected until later that afternoon. She was one of the lucky few that got her tattoo. 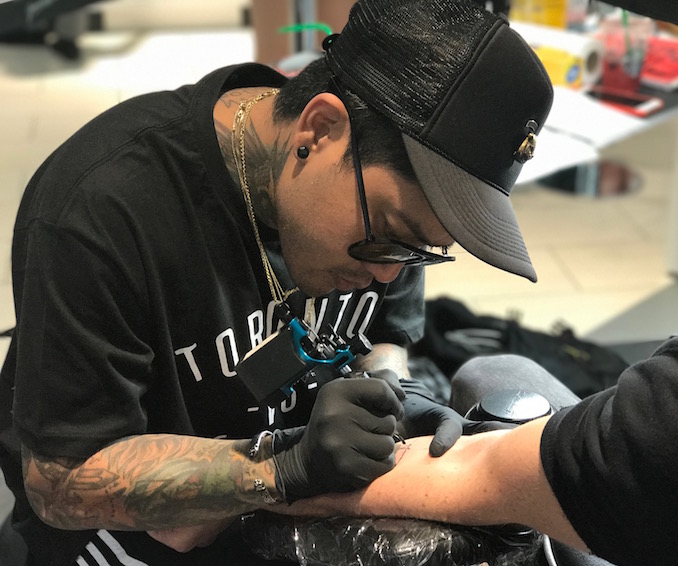 No surprise at the number of people who showed up but what did surprise us was who was waiting in line. There were fans from all walks of life and not just pretty 20 somethings. They’ve read articles about him in style magazines and have been following him on social media. His Instagram account started in July 2012 with his first entry with Carlos Leon getting a “NYC” tattoo. Today, he has 511K followers and counting.

JonBoy looks badass with tattoos all over him from neck down. He’s all cool like that, but he’s left all the attitude at the door. He’s humble and grateful for his following. He thanks everyone for their patience and is sincere right from the moment you meet him. Tattoos take time and he’s a perfectionist. Watching him at work is mesmerizing you can see in his eyes — this is serious stuff. It’s art and it’s permanent.

How did he get here?  His story is what we were interested in.

What’s was the first tattoo on you?

My first tattoo is a tribal arm band that I got in the 90s. I went into a tattoo parlour and told them I want one of those barbed wires, like Pamela Anderson. But I wanted it for Jesus.

Who inspired your love for tattoos?

It was my grandfather who was in the Navy in the Philippines. He had a tattoo of a rose for my grandmother who’s name was Rosita. For me, growing up and seeing that tattoo made me want to get a tattoo. When I turned 19 I got my first tattoo but you know what they say, ‘once you get one tattoo it gets addicting.’ So I just kept going. It was so magical. I was so interested in how it all worked. I started selling my sister’s Beanie Babies collection so I could keep getting tattoos. 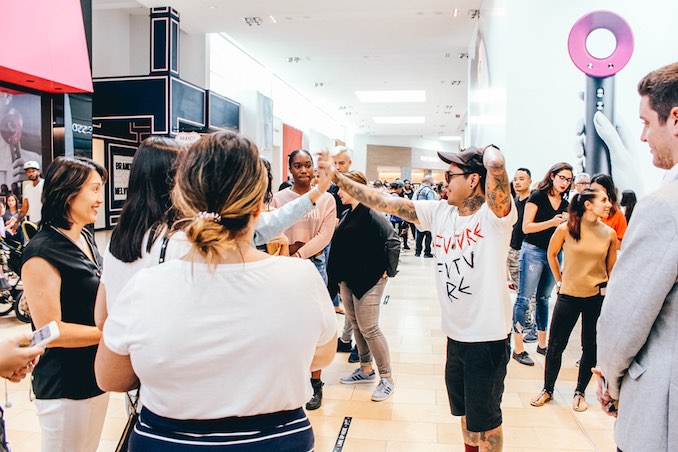 Getting into this wasn’t easy at first. Everyone in the industry discouraged me but I guess I got lucky. An old biker dude took me under his wing and it was during a time I was going to seminary school.

Right, you were studying to become a youth pastor? This is quite an extreme.

Totally…but not. I always wanted to do something positive for the youth. The millennials are making me look good (laughs).

How do you create these finer tattoos? They look simple but I know they’re not.

Yeah, there are a lot of variables in doing this kind of tattoo. The equipment and the ink are just part of it. You need to be technically sound to make sure the lines don’t blow out or get all blurry you know, in 30 to 40 years.

The tattoo culture dates back centuries in many cultures with Japanese, Maori, and Philippines before it came here?

Oh 100%! The first documented tattooer was a Filipino tribal guy. It was actually a Prince and tattooing was part of royalty in the tribes. It’s an ancient form of art for many cultures.

So, everyone has a story or reason for wanting a tattoo. What’s one of the most memorable stories you’ve heard as a tattoo artist?

There was a young guy who I tattooed just a few months ago. He was dying of cancer and he really wanted to get tattooed. He had such a positive spirit about him and was at peace with everything. To be able to give him a piece of art that could remind him that everything was going to be okay on the other side and that he will be reunited with his family members was important. Having that moment with him hit me hard, you know? It reminded me that tomorrow is never promised and he knew that. He was ready and accepting. It was pretty special. That was one of the most memorable tattoos I’ve ever done. I’m just glad I got to do that before he passed.

Is it strange that people go totally fan crazy over you?

Yeah, it’s so crazy! I’m such a regular dude just doing my thing. To be on this platform is so surreal but at the same time I have this understanding that I have a responsibility. Although I’m not a youth pastor I know people are watching. I want to make sure every move I make is honouring myself, honouring people and honouring God. It’s just me wanting to have a positive influence on people.

Okay, last question! This is your first time in Toronto! What do you think?

Oh, I love Toronto! It’s so cool! The people out here are so loving, welcoming and so hospitable. I’m excited to explore the city. I have no idea of what to do while I’m here but I’m like that.  I’m a free spirit when it comes to visiting new places. I love discovering. I just like to go, you know? And wherever I’m led, that’s where I’ll be.

I’ll be back Toronto. Thank you.

“Spotted at U of T.” Jason Cook’s photo creating a Toronto version of the album cover of “Abbey Road” […]

Bone and Bred reppin’ the city and beyond

The doggy world is amazing! Pet owners have so much available these days to accommodate every lifestyle and taste. The […]

What’s worth staying awake for at Toronto’s Nuit Blanche

Take your afternoon nap and grab your comfy shoes! It’s that time of year when the streets, galleries, parks and […]