The Canadian Alliance on Mental Illness and Mental Health (CAMIMH) recently announced their winners of the Champions of Mental Health Awards for the year 2017. The 15th annual awards celebrate individuals and organizations whose work aims to improve mental health in Canada.

“We are now in our fifteenth year of the Champions of Mental Health Awards, and we continue to see amazing contributions to mental illness awareness and to the mental health community year after year. This year is no exception,” stated Fred Phelps, CAMIMH Campaign Chair 2017. “All of the more than 200 nominees inspire us to continue supporting mental health across the country.”

A gala to honour the 2017 recipients for their leadership in mental health will take place on May 3rd in Ottawa.

Winners of the 2017 Champions of Mental Health Awards

INFO: Following the tragic loss of his son to suicide, Brian Hansell was moved to make a difference in his community and create the Paul Hansell Foundation in memory of his son. Wanting to create a way to encourage people to have more meaningful conversations, Brian used his experience as an entrepreneur to create ConvoPlate, a series of plates that are passed along to encourage dialogue about mental health. Since it’s launch, the ConvoPlate has led to hundreds of passes, thousands of conversations, and an estimated $300,000 raised. 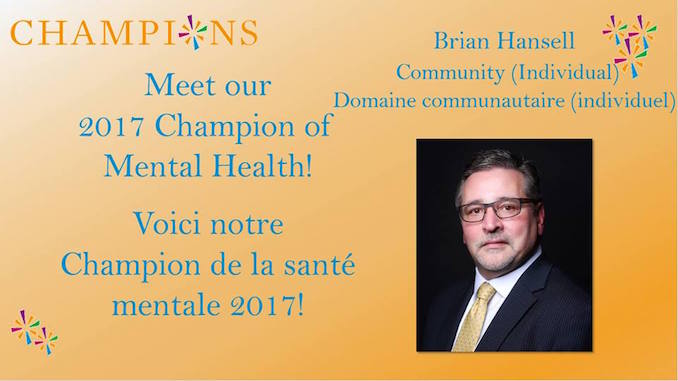 INFO: Stone Hearth Bakery opened in Halifax in 1982 with a simple goal of providing meaningful training and employment opportunities for individuals 19 years of age and older who were living with mental illness and experiencing persistent barriers to employment. Each year, approximately 65 people participate in the bakery program where, under the guidance of certified bakers, they are provided an opportunity to work in a commercial bakery while gaining employment experience, work skills and self-confidence. Stone Hearth Bakery is committed to helping the community, reinvesting all proceeds back into learning and training opportunities. 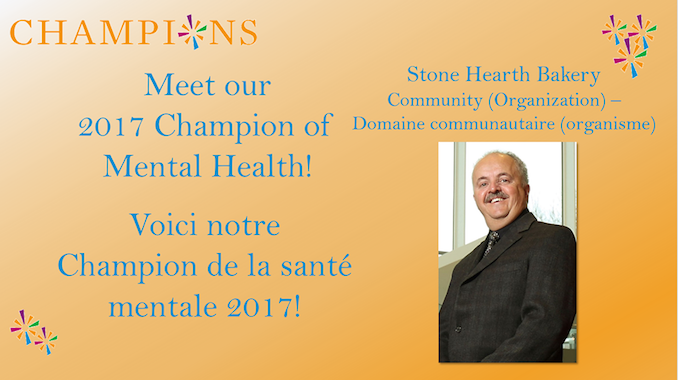 INFO: Arms Bumanlag is the Windsor Weather Anchor with CTV Windsor and radio talk show host on AM800 CKLW. On air, and on social media, where he has an extensive following, Arms openly shares his struggles with anxiety. Arms shatters the stigma around mental illness and is an advocate for the mental health community and an ambassador for the Sole Focus mental health campaign. 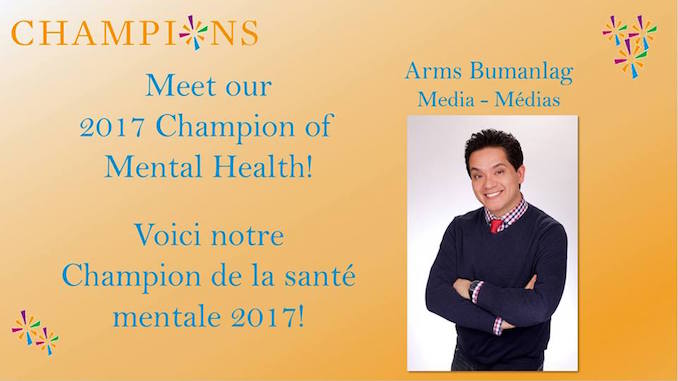 INFO: Dr. Phil Tibbo has a long history of supporting the mental health community through his leadership, research and advocacy. Throughout his career, Dr. Tibbo has studied psychosis, particularly in youth and early intervention services. His work led to a large philanthropic donation, forming the Bebensee Schizophrenic Research Unit when he was in Alberta, and he was named the first Dr. Paul Janssen Chair in Psychotic Disorders at Dalhousie University in 2008. Dr. Tibbo’s community involvement also includes Board Member of the Schizophrenia Society of Canada and Chair of the SSC Foundation, and President of the Canadian Consortium for the Early Intervention in Psychosis. 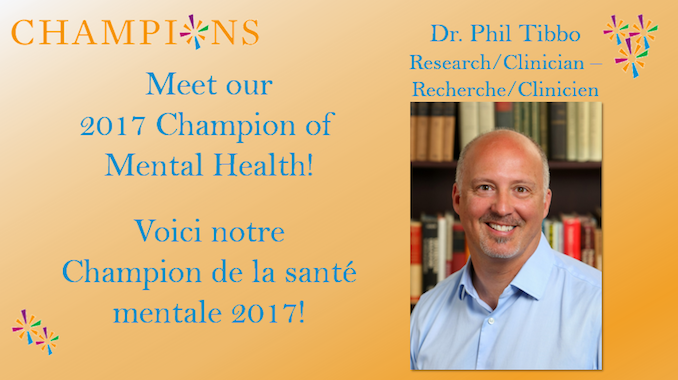 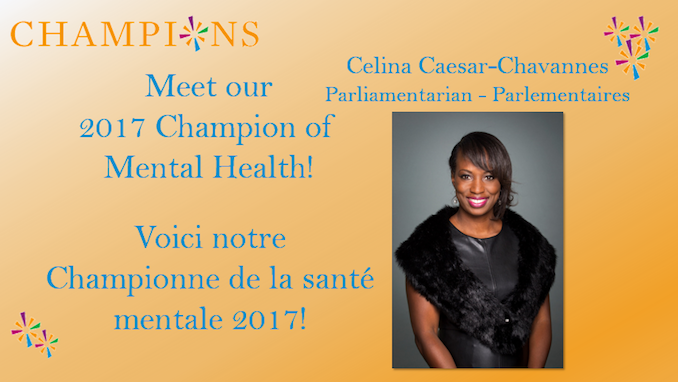 INFO: Through his work as a registered social worker and public servant, Todd Lyons hosts a podcast for and about public servants. While the podcast addresses a variety of issues, including gender violence, diversity and conflict resolution, there is a recurring theme of mental health and mental illness throughout his work. His work has been promoted by the Clerk of the Privy Council, and has launched the careers of some of his guests as mental health speakers. 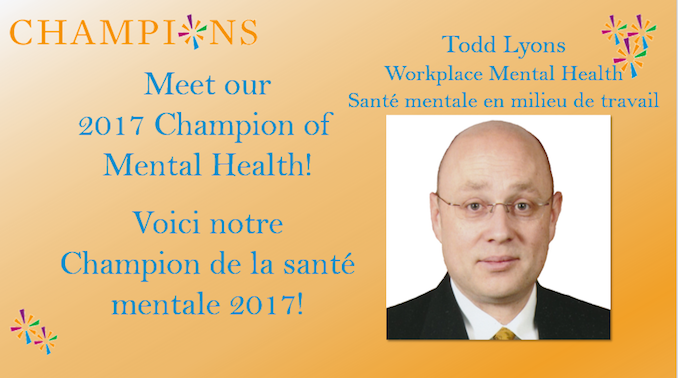 The Sharon Johnston Champion of Mental Health Award for Youth

INFO: Despite her selective mutism, Lauren Whiteway has become a vocal advocate for her condition, which is a severe form of anxiety that causes someone to be unable to speak in certain social situations. Through her blog and video series, she has reached tens of thousands of people around the world, with a distinct focus on her own community. She also created a Facebook group to increase awareness and connect parents with children who have selective mutism in Atlantic Canada. A recipient of the YMCA Peace Medallion and the Governor General’s Caring Canadian Award, Lauren’s work is taking off! This year, Lauren began speaking at local high schools and the youth psychiatric unit at the local hospital to share her journey with mental illness, not only to increase selective mutism awareness, but also to reach out to others who may be struggling with mental illness. 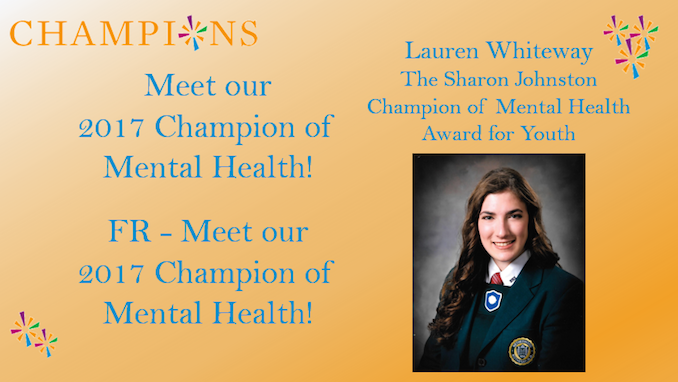 To learn more about The Canadian Alliance on Mental Illness and Mental Health and the Mental Health Awards, please visit their website.

12 realistic (and affordable!) self-care tips to improve your mental health

What comes to mind when you think of self-care? Is it treating yourself? A soft, fluffy robe, bubble baths, maybe […]

We’ve all adjusted our work, study, and home life over the pandemic — our pets have as well.  Many of […]

When you think of unique wellness spot to unwind in a post-pandemic world, one deluxe ambiance that comes to mind […]