To be one of Canada’s leading food and restaurant critics can’t be an easy job. Sure, we all think we can do it but let’s just pause for a moment. Your experience, your opinion can make or break a restaurant. That’s some heavy weight to carry on your shoulders. Chris Nuttall-Smith had been writing up reviews for over 10 years for several publications. When he announced his last restaurant review for the Globe and Mail last fall, I was heartbroken. I had looked forward to his write ups each week that were damn good reads whether it was about the hidden gems in suburbs  or a scathing write up. His reviews instill many conversations amongst family and friends and sometimes have us curious enough to go and check out an establishment to see for ourselves.  His job as a restaurant critic was to give us readers the experience through his reviews (good or bad). Whether you agreed with him or not, is another thing but mediocre was never a word that we would ever associate him with.

Now, Chris Nuttall-Smith has a slightly different role as a resident judge on Top Chef Canada: All-Star season premiering on April 2 on The Food Network. We had a chance to chat with him recently about this new role…

So, how were you convinced to be one of the judges on Top Chef Canada All-Star season?

CNS: It’s funny because it really wasn’t all that hard for me. I’ve been approached a lot throughout my career to do different TV things but timing was right. It was ten years that I’ve been a critic that I was coming up on so I was definitely ready to something that didn’t involved going out four or five nights a week.

The show, and the competition, was clear that they wanted to refresh it and really focus it more on food and cooking more than ever. They wanted to make it something extra special this season and they managed to do that. So, it wasn’t a hard decision once that all got started and once the shooting started I realized that this was really a cool thing to do.

The line-up of chefs is incredible and stakes are high (no pun intended). You know a lot of these chefs, so how did that factor in? How did you stay calm and focused on the job at hand?

CNS: It’s not that dissimilar from my old job. There are some key differences for sure but at the end it comes down to what they are cooking and how it lives up to expectations of taste and presentation. What thought went behind it and how well they met the brief of the competition. In the end you’re judging the food and the personalities are certainly a part of that but I didn’t find that all distracting. I think the line up of judges are all pros. We all do this everyday or every week. But what was a challenge was to pick sometimes between incredible dishes or trying to pick between two very bad showings and you need to figure out who has to go home that week.

Does it freak you out that your face is everywhere now?

CNS: It is a little odd! I’m diluting myself for a while and pretending my face isn’t out there. I’ve see pictures of me at Yonge and Dundas Square and it freaked me out a little bit but it’s fun. It’s so cool to see how excited people are about this show and the content of the show.

To be honest, I never knew what you looked like and when I first saw a photo so, I was surprised!

CNS: (Laughs) I get that reaction sometimes with people saying “Oh I never thought you looked like that!” Some people expect some crusty old dude with food on his face. I think I might have disappointed some people.

Yikes! That’s not what I meant lol.  I didn’t know what to expect and even though photos have been leaked, I didn’t want to know. I liked keeping you as a mystery. Sorry, is that weird to say?

CNS: Oh no, but the funny thing about the purported leaked photos of me is they weren’t actually me. There’s one of a writer, David Bezmozgis, who was the first hit you get when you search my name for the last seven years. As I tell everybody, I really hope he got good food and service.

(I’m googling now – oh yeah!) Anyway, I loved, loved, loved reading your reviews especially in the Globe and Mail. There are a few unforgettable ones that still comes up in conversation.

CNS: You know, you always try to remember that most people that read your review are never going to eat that food and it’s the same with TV. Most of the people who are watching are never going to eat that food. You really need bring them there and to help them experience the food, environment, and atmosphere. You want to take them along with you. It’s like a form of escape for people. I was lucky that people really responded well to what I did and still do. I’m still writing and it’s a lot of fun to bring people to where they may not necessarily go themselves.

Well, I definitely have gone to places because you’ve written them up, but I live in the city, so that helps! But do you ever get tired of eating out?

CNS: Of course. One of the first rules of being a food critic is you’re never, ever, ever allowed to complain about being a food critic. I definitely keep that in mind. It’s an amazing job and you find yourself going out at night to restaurants and you’ve already been once or twice and you know it’s not a good restaurant and you wish you can just be home and eat Kraft Dinner. But on the whole it’s so much fun. You get to live a part of the city that very few people get to. You really get to see the face of the city that is fascinating and constantly changing. It says so much about who we are, where we are at, and where we are going. That’s what I love. It more about life than what’s on your plate.

And you go more than once when you review a restaurant?

CNS: It’s nice to get to know a place, for sure. I’ve been really lucky throughout my career that the publications I’ve worked for, whether it’s Toronto Life, The Globe or freelance, all  have budgets. I think it’s so important to be a restaurant critic that’s not on the cheap. You need to go and experience a restaurant the way the people who read your stories would. That’s sometimes expensive. Going back more than once is really crucial when you’re going to pass judgement on a place and know that that judgement is going to matter to a restaurant. So always as a critic I didn’t endeavour just to have an opinion, everyone has an opinion, but my goal was to always be right. In some ways I know it’s a ridiculous goal because restaurants are constantly changing. But when people respond to my reviews and tell me that they had a similar experience, then that to me is really gratifying. It meant I did my job.

Are you your own worse critic?

CNS: I think you have to be. To do anything well, you have to critical of your own work for sure.

So, I understand that not only do you love to eat out but you also love to cook? What are some of your go-to dishes?

CNS: Cooking is how I got into all of this. I was a journalist that covered politics so all through my time as a non-food journalist I was cooking like a fiend. I was really ambitious and I still am. But I have dishes that I lean on like simple roasted chicken or grilled mackerel on the barbecue. I also do a ton of vegetable dishes like smoked eggplant with lemon, garlic, pomegranate and olive oil. And pastas! I have a nine year-old boy who loves eating pasta. I’m pretty wide range when I cook and I also do it for work as well testing out recipes or techniques. I wouldn’t say that I make things over and over again but I certainly have my favourites.

CNS: Oh! That’s a hard question! It depends on the day. But I would say a beautiful spaghetti or bucatini with a great fresh tomato sauce. In the summer I’ll take those tiny little baby tomatoes, throw a ton of them in a pan with olive oil, garlic and wait until they pop because they are super hot  and they splatter and pop. Then you toss the pasta in with a little water and that to me is heaven. I also love a great pork chop from Sanagan’s. I think they have the best pork chops — nice cuts with a bit of fat on them. You do them on the grill so they are just barely pink on the inside. I love that with a good mustard and serve with lots of vegetables. I  like dandelion and bitter greens. I could go on and on. I love eating, can you tell?

Okay, now I’m getting hungry! I love eating too but how the heck do you stay so fit? Is there a food critic secret? I see what you look like.

CNS: (laughs) Well, I ride my bike everywhere for everything.

Okay, so what’s been more pressure, to review restaurants or being a judge on Top Chef Canada?

CNS: Being a judge on Top Chef has been really fun. I had no idea how I was going to like it until I got in there. There’s a lot of pressure to be right and to get it right. Definitely the stakes are high. It’s TV and people really care about this. People are working so hard to do great work and to deliver big food. But when you do a job that you’re comfortable with and you’re at the table with these incredibly talented, smart food people like Mark, Eden, and Janet who know their stuff and have been at this  for a long time, it’s ultimately as stressful as a really great dinner party. Which to say it’s not stressful but it’s a lot of fun. It’s also illuminating. You learn a lot from everyone’s experience. 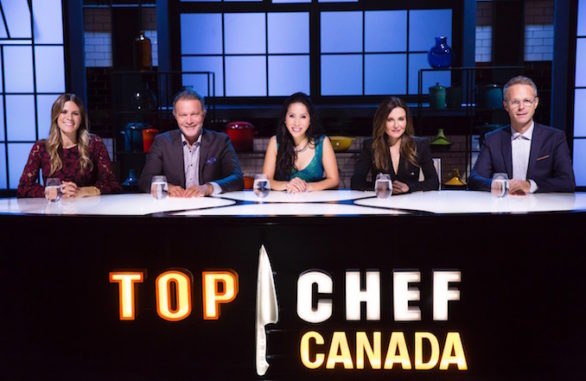 Chef Martine Bauer shared this tasty recipe for Bluefin Tuna with Tonnato Sauce and Herbs. She is the Chef and […]