Big things are happening at Front and Sherbourne in 2017. Two of the four corners will soon be ringed with wooden fences as excavators dig down through the history of Toronto to make new foundations for the future of the neighbourhood.

What neighbourhood? There’s nothing special about this part of town right now; the place is ripe for development. A derelict car dealership, an ancient gas station, a Rabba convenience store and two parking lots surround the intersection today. We read in a fresh property value report for 177 Front St E (pdf) done by Hometrics Jan 2017 that 43,365 residents live in this 7.6 km square area with only 8.53% green space, and only 5% tree cover. There were 59 graffiti complaints, 381 noise complaints, and police investigated just over fifty minor crimes here last year. The average age is 39 yrs old and the average annual income is $122K which may seem healthy, but actually appears on the low end of the scale across the downtown core.

Regardless of the area’s present condition, the two properties on this long neglected street corner are ideal for development. The new residential buildings are well  positioned between large tourist attractions, colleges, hospitals, churches, police and there’s a fire station next door. There’s easy access to public schools and community centres on The Esplanade, and fine dining in every direction.  Surrounded by such a wealth of amenities, the area awaits its next transformation.

Few people know that the four corners of Front and Sherbourne are heaped high with the history of Toronto.

Despite how well educated our city’s residents are these days, not many people know that Front and Sherbourne is about as old as it gets in relation to the history of Toronto. This intersection was once lakefront property. The north side was the busy waterfront of the original settlement of York, as pinpointed in the 1797 sketch of the settlement of York, with present day 177 Front St E highlighted.

Not many people know that Front Street was right on the lake shore in 1797, and maybe that’s because it was called ‘Palace Street’ back then. When walking south on Sherbourne St., same as Jarvis, George, Frederick, and even on Princess, you’ll notice a sudden dip down right after Front St. That’s the ancient shoreline.

Sherbourne was called Caroline Street back then and so the point we’re discussing is really the intersection of Caroline and Palace St in the early 1800s. There’s a real good time travel story on Time and Space condos site about the property development at 177 Front St E on the south east corner of Front and Sherbourne. I’ve borrowed some of the maps and images from the tale to help show the evolution of the terrain for the benefit of the time traveler and anyone set to be super annoyed with three years of construction slated to transform this part of town. Click the pics below – the picture expands most satisfyingly. 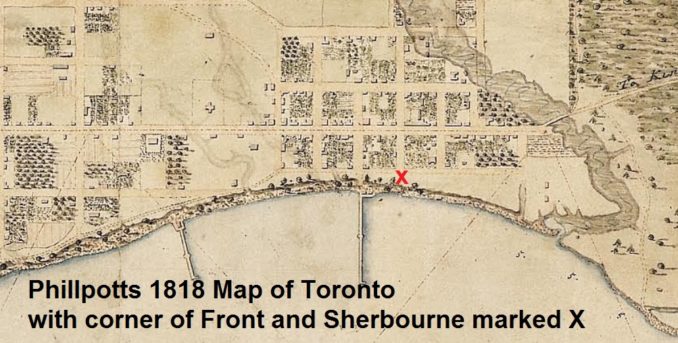 An archeological survey done for 158 Front St E (pdf) commissioned by the city for the present site of the St Lawrence Condos development also has many interesting factoids. The 2012 report details many different owners and industries at the site over the past two hundred years. The study concludes, much to the relief of the present property developers I’m sure, that “there is no potential for the survival of earlier nineteenth century physical remains of any form, in primary contexts, that would be considered to be of cultural heritage value or interest. Indeed, even the survival of redeposited material related to any of the pre-mid nineteenth-century occupations in secondary or tertiary contexts.” Given these findings, the 33 page report made the following recommendation that, “158 Front Street East subject property may be considered clear of any further archaeological concern.”

And while it might be true there’s nothing buried under the ground here (I’m sure I know some local bottle collectors who will double check with the excavators anyway) there are glimpses of the area preserved in the Toronto Archives, and the Toronto Public Libraries, and enough remains in these vaults to tell a pretty accurate story about this iconic intersection through the ages.

If I told you to meet me at Palace and Caroline at eight bells to catch the boat to the Island, you’d have no idea what I was talking about, but that request would have made perfect sense to anyone familiar with Muddy York on the north shore of Lake Ontario in the early 1800s. Its recorded that from the mid 1820s right up until the 1850s (when the city made The Esplanade) there was an open market at the base of Caroline St. (and another at Jarvis, and one at Yonge etc). Thirty years after that there’s a busy railroad on The Esplanade, and you can a see a horse and buggy traveling east through the intersection of Front and Sherbourne in the 1890s era sketch below. 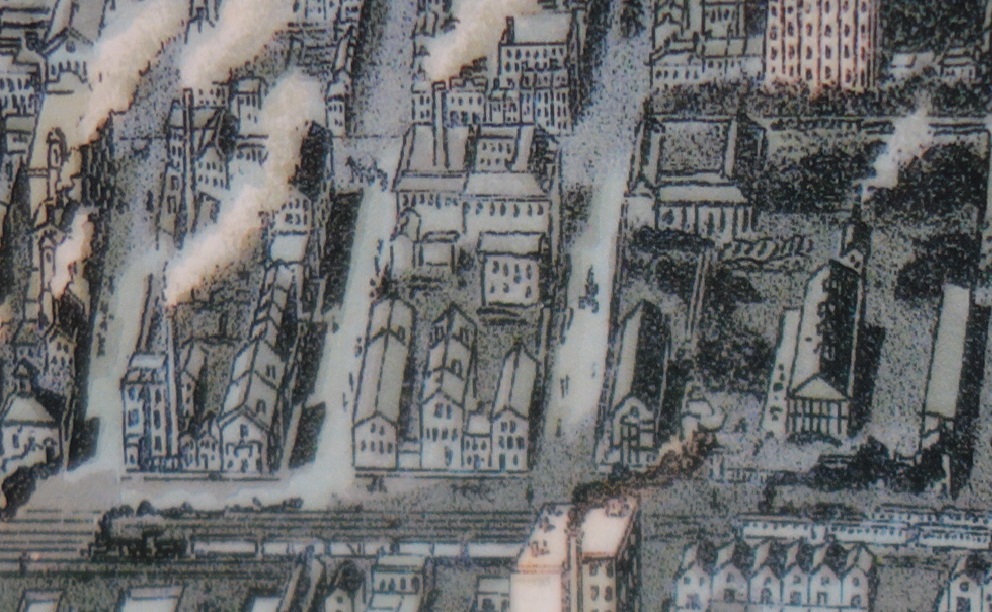 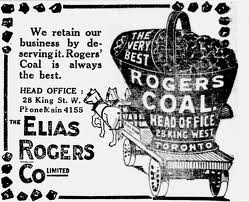 The sketch shows the quadrant as a thriving urban industrial section at the confluence of skilled labour, railroad transportation, and cheap energy. The darker blue shades in the sketch above may hint at the ‘soot’ and coal dusted condition of the compound on the right (on the east side of Princess Street) which belonged to Elias Rogers Co., a powerful local coal baron who supplied nearby factories and most of Toronto’s homeowners with ‘the very best coal’. Toronto Guardian readers may enjoy an autobiographical account of Elias Roger’s climb to wealth and power as recorded on Bill Gladstone ca

The St Lawrence Condos at 158 Front St E are an advanced building design with a  ‘staggered blocks’ style appearance that will turn heads. This is what the future looks like in this spot today. 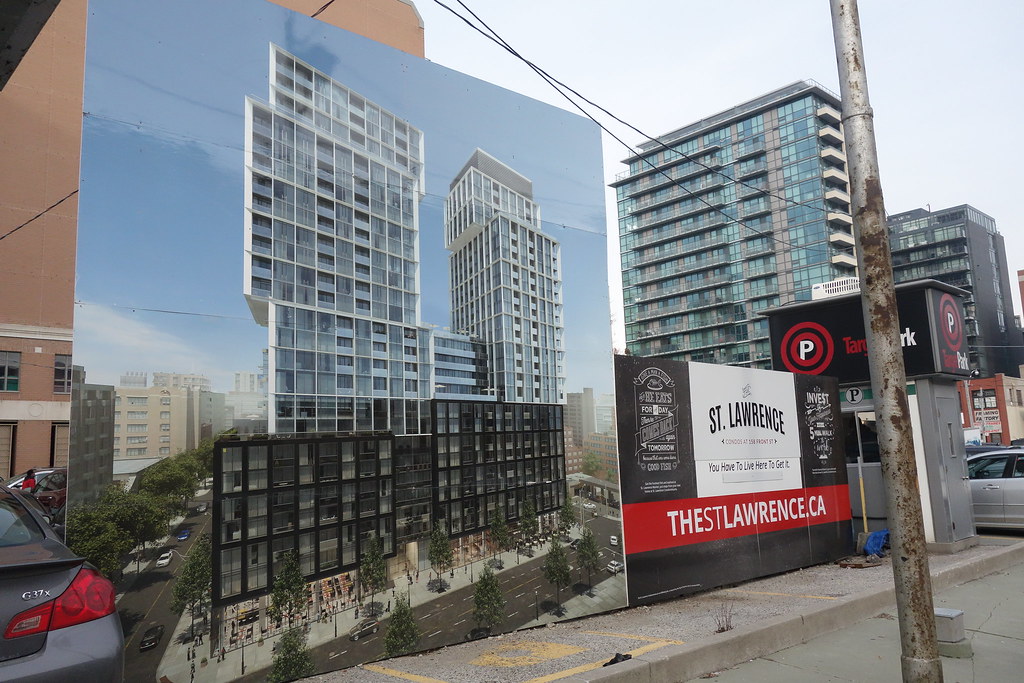 A photographer standing in this spot five years ago would have seen the Greyhound Bus Station that was just here. Demolished in 2011, that structure was built in the mid 1960s and for fifty years it was a prime conduit through which many people arrived in the city for the first time.

Close to the same spot, facing the same direction seventy years ago, an unknown photographer captured this street scene below. Both of the north corners had automotive maintenance, safety check mechanics with repair shops. The business on the north east corner sold fuel at that time, while it seems the pumps have already been removed on the north west side, the side closest to the photographer.

You can see in the photo above that there was a gas station on the north east corner of Front and Sherbourne back in 1958. This businesses would have removed any archeological material when they dug their fuel tanks. What would they have found? 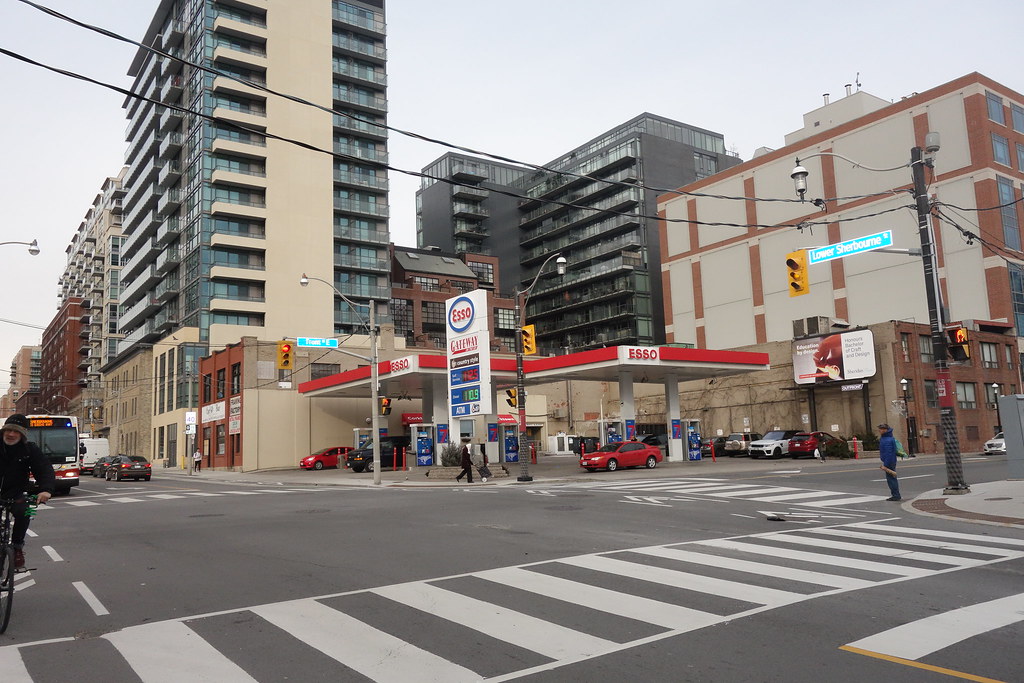 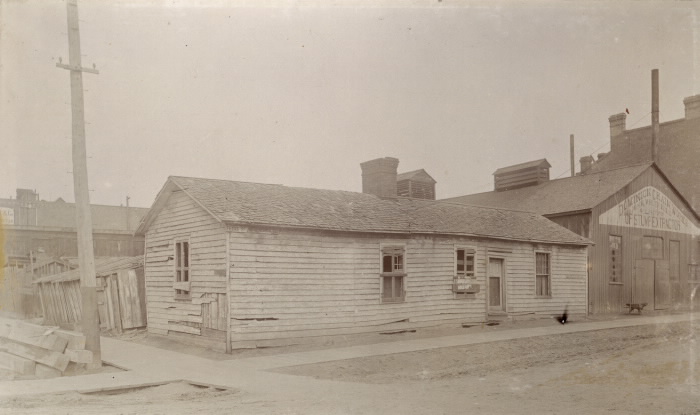 John Shea Cottage, 1885, photo courtesy of Toronto Public Library. Unless this author is gravely mistaken, the Shea, John, cottage timber frame building was erected before the War of 1812, and so it may have been photographed for the record books just prior to its demolition in 1885. 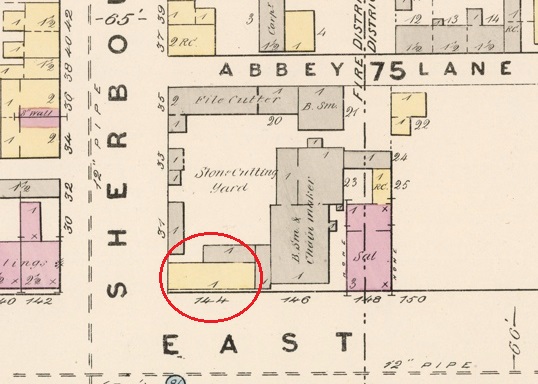 You can see it on the 1880 Goad fire Insurance Map of Toronto.

But who was John Shea?  There is a ‘stone cutting yard’ behind the shack and we can see the building next door belongs to a ‘chain maker’.

The south west corner of Front and Sherbourne street, where the Rabba convenience store is today, also has its share of local heroes in the 1800s. 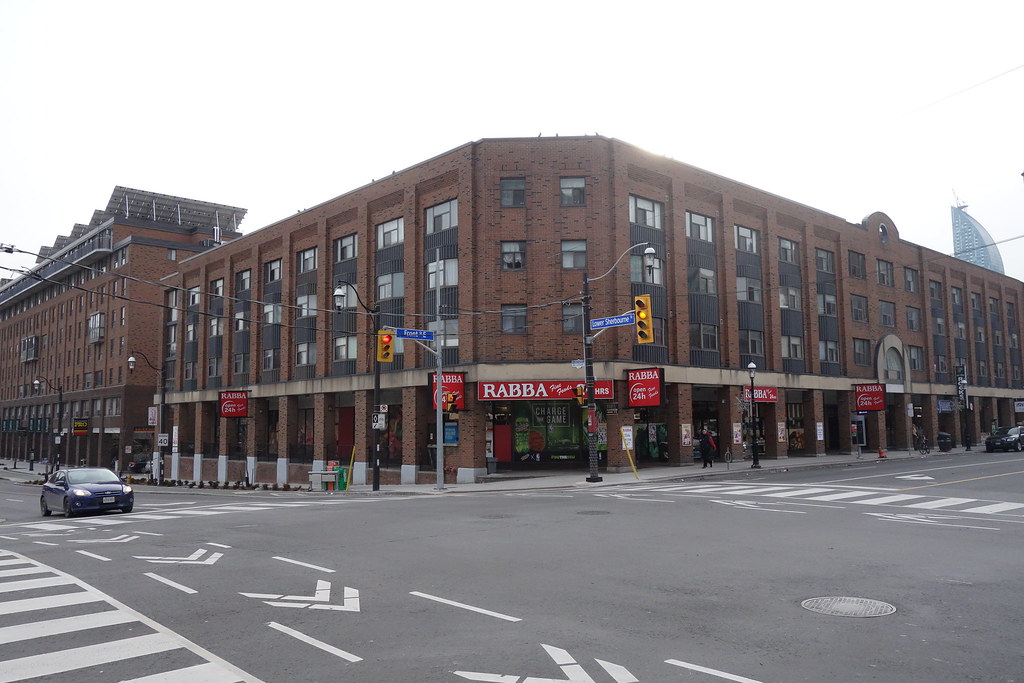 We know the present structure was built in the early seventies because in the archives we can see there was empty lot here in 1972; the property was being developed then and just waiting for a Shopper’s Drug Mart to be erected there (the sign says ‘Shopper’s Drug Mart’). 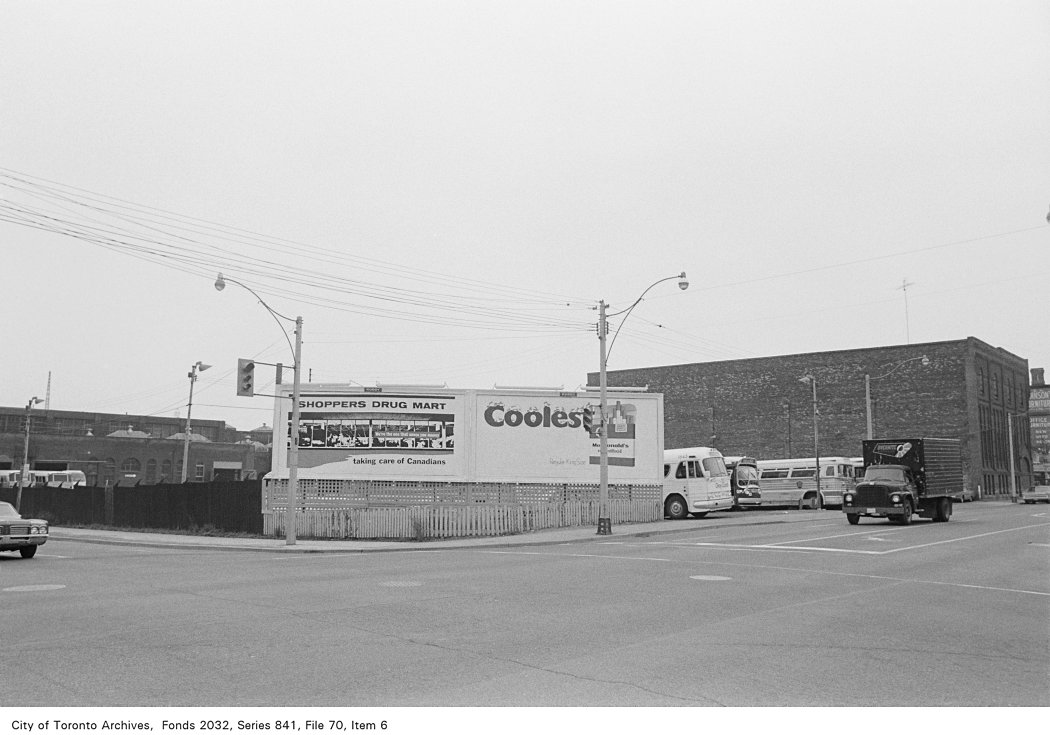 But go back another hundred years from that point and behold, this city block once accommodated the J & J Taylor Safe Works, makers of the classic 1885 Victor model bank safe which a generation of thieves dreamed of cracking all across the freshly minted Dominion of Canada.

John Taylor and his brother James arrived from Scotland as young boys in 1838.  In 1855, they established their safe manufacturing business J & J Taylor Safe Company, at 198 and 200 Palace St.

One of the buildings seen in the image above which the company occupied for a period still stands today – the William Davies pork packing plant which I reckon John Taylor bought out just to quench the stench at the corner of Frederick and Front. This is the plaque on the wall . 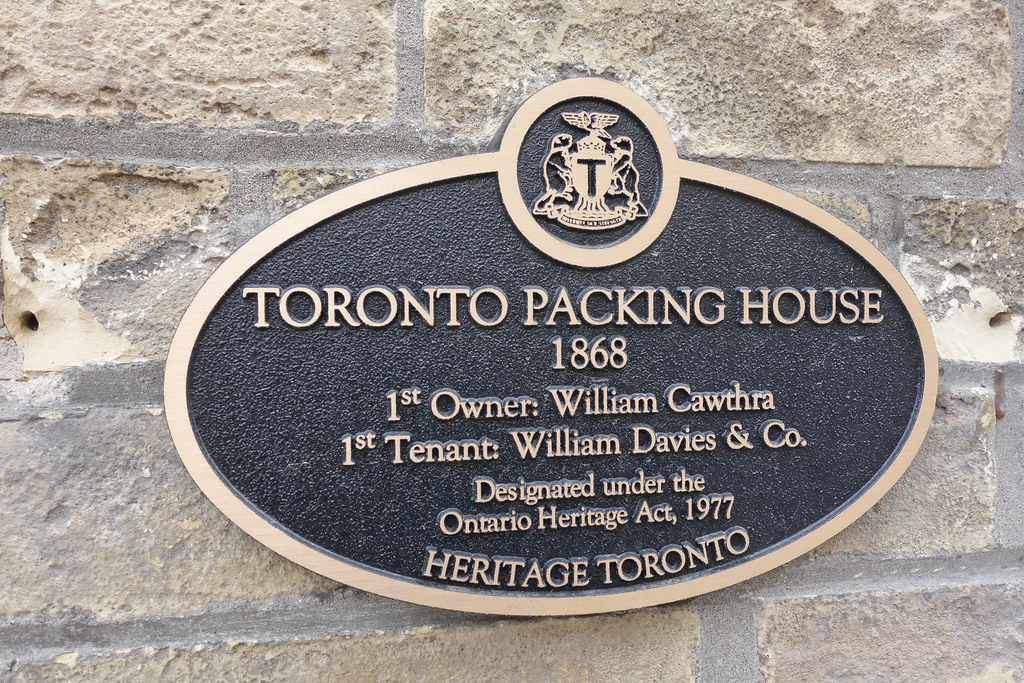 Finally the future of 177 Front St E is very bright indeed.  Here’s the south west corner of Front and Sherbourne as it appears today. See that lonely smoke stack? 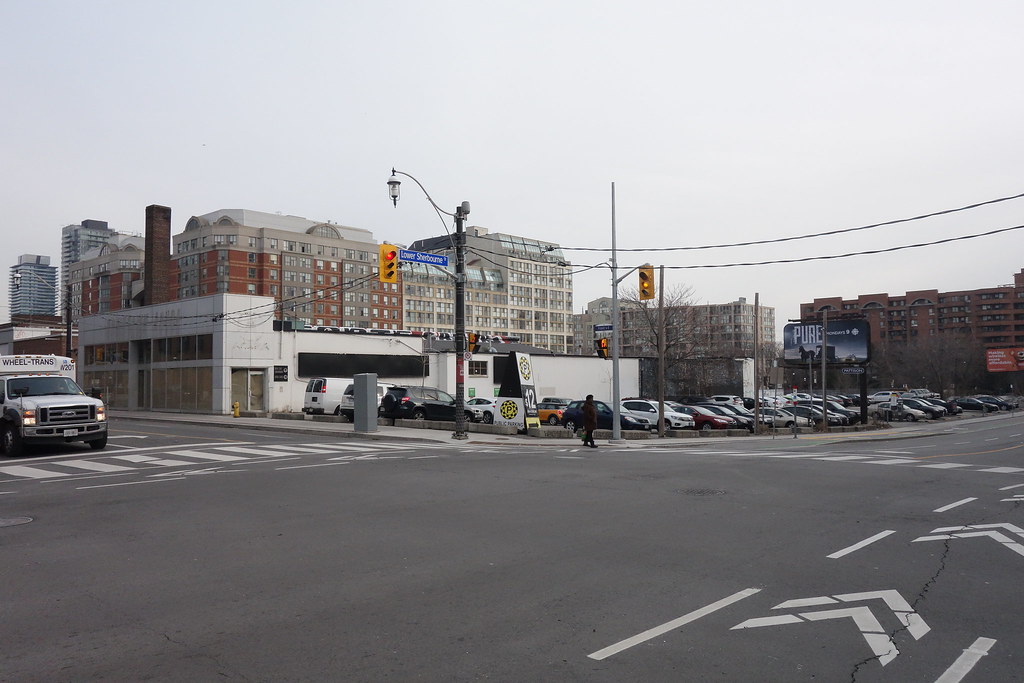 Newsome and Gilbert Ltd. printing plant was located at 177 Front St E in 1972. The old smoke stack is visible back then but does not appear to be connected to the building. Newsome and Gilbert made high quality legal stationary for law firms across Canada and this facility probably employed a hundred people in the area.

Although Newsome and Gilbert Ltd had been around since the 1880s, this plant at 177 Front St E marked the apex of their achievements, and when it was demolished in the nineteen eighties the company disappeared in a mega-merger shortly thereafter. Here’s a shot of the parking lot they left behind, taken in April 1980. Lots of buildings pop-up all around this property in the next three decades, but this lot has remained curiously under developed, until now.  Change is coming.

This is the new home of Time and Space Condominiums by Pemberton.