By all accounts you should treat yourself to a ticket to the Tony Award-winning Best Musical, A Gentleman’s Guide to Love & Murder now playing at the Princess of Wales Theatre until June 26, 2016. Not only is it quirky and fast-paced but it’s hilarious and highly entertaining. 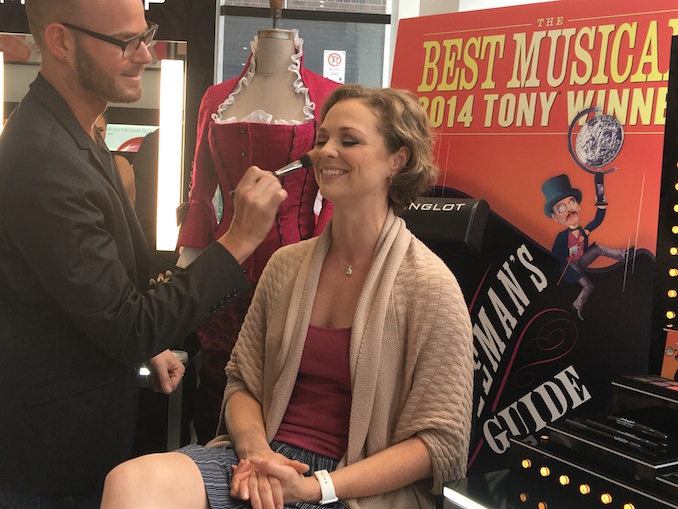 Set in the early 1900s England, Monty D’Ysquith Navarro, played by the charming Kevin Massey, learns that he’s ninth heir to becoming Earl but in order to get his hands on the family fortune he must somehow eliminate eight relatives in line ahead of him. In the meantime he is in love with the beautiful Sibella, played by the incredibly talented Kristen Beth Williams, who’s character is clearly interested in marrying for money rather than love, but Monty schemes his way to fortune that would hopefully win Sibella’s heart. As the story unfolds Monty gets away with murder more than once and Sibella decides to marry someone else, while stringing Monty along just in case his inheritance becomes a reality.

While I can go on and on about how much I loved this musical comedy, I will switch gears and tell you about the day I had the opportunity to meet Brian Strumwasser, the famed Broadway Make-Up Artist who created the looks for this show and others including Arthur Miller’s The Crucible, Disney’s The Lion King on Broadway, Matilda, and many more.

It’s not often that we can get behind the curtains to learn about how all the gears of a production work together. Strumwasser was flown into town to offer beauty media a chance to see how actors transform into their on stage personas. We were under the more comfortable setting of Inglot’s shop at Yonge and Dundas Square for the chat and demonstration on lead actress Kristen Beth Williams. The established cosmetic company  created the colour palettes and formulations along side Strumwasser to be used on stage as well as for everyday humans like you and me. Why Inglot? Strumwasser explains that he doesn’t consider them a cosmetic company but more chemists. “If you give them a shadow they’ll figure out what that shadow is made of and how to replicate it. They’ll figure out what’s good and what’s bad.” Strumwasser explained that he had presented them with a few products that he loved to work with and Inglot sent them all to their scientists and researchers in Poland to determine the best parts of what he loved and created the best products for his needs. Some products, like the primer that came out with the Mamma Mia collection, have since become one of the company’s best selling beauty products for consumers. 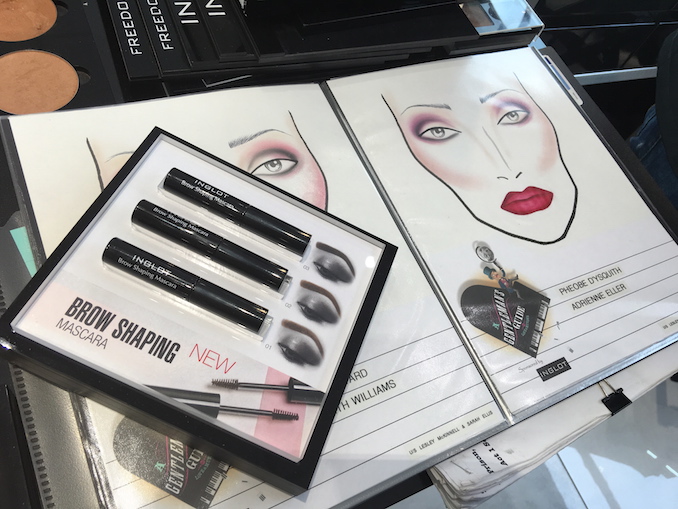 Strumwasser’s background is not actually in make up artistry but in fine arts. His career in theatre came after working for MAC Cosmetics and his work being featured in magazine editorials, film, television as well as runway shows before becoming one of Broadway’s most sought after make up artists. He tells us that there are 8 make-up artists in comparison to the 150 + hairdressers who create the looks for the 33 productions currently on Broadway. What surprised me the most was that while he is responsible for creating the looks along side costume designers for each production, it is the actors themselves who apply their own make-up for each show.

Strumwasser works closely with each designer and studies the outfits before creating each palette. He then instructs the actors on what to use and how to apply each step. The size of the stage also matters. “The larger the stage the more make-up needs to be used.” says Strumwasser. Then a step-by-step face chart is given to each actor to replicate the looks for each and every show. Williams tells us it takes her 40 minutes to “do her face and hair” before each show. Strumwasser says he will visit the city where the shows are playing from time to time just to check in but with the help of social media he can see it all anyway and can reach out to the actor if needed. 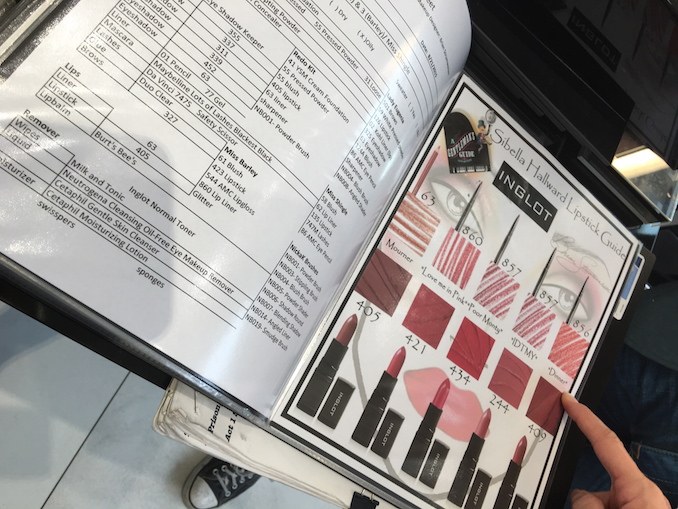 In a show like A Gentleman’s Guide there are often several costume changes. One of the most challenging is John Rapson’s in A Gentleman’s Guide who plays The D’Ysquith Family – yes, the whole family. Rapson plays 9 characters throughout the play and at one point only has 17 seconds to make a quick change. So, Strumwasser had to create looks that were quick enough for Rapson to do in-between scenes.

Strumwasser also tells us that the make-up used on stage is not all that different from our day-to-day cosmetics and it’s all about using primers that helps smooth out the skin, then using a fixture spray to give make-up it’s longevity under stage lights. “If you think about it, actors have their make-up on for maybe 3 hours,” says Strumwasser. “but for everyday you may have your make-up on for 8 or 9 hours so you definitely want to make sure your make-up stays on but for on-stage the lighting really dries out make-up and skin so I really want to make sure that everything is taken care of.”

He also has his hairdresser’s license and does that role on Broadway often but aside from A Gentleman’s Guide, he’s currently working on Arthur Miller’s The Crucible. “If you’ve ever read the book, it’s about the witches. It normally doesn’t have very much make-up as it’s set in a Puritan style but at the end of this production they are fully bloodied and gory with over 130 prosthetics that are hand-painted each week. I go through gallons and gallons of blood,” says Strumwasser. ” It’s the complete opposite of what this show is all about. This show is about beauty make-up and making things really pretty.”

After meeting with Strumwasser and Williams I found myself paying more attention to the faces on stage and appreciating another aspect of a theatre production from behind the curtains.

A Gentleman’s Guide to Love & Murder is on stage at the Princess of Wales Theatre until June 26, 2016. For more information visit www.mirvish.com

Wondering where you can take in the Royal Wedding of Prince Harry and Meghan Markle this weekend? David Mirvish has […]