This summer, 100 internationally-known artists will join together to feature 100 custom design brain sculptures in an open air public art installation here in Toronto. 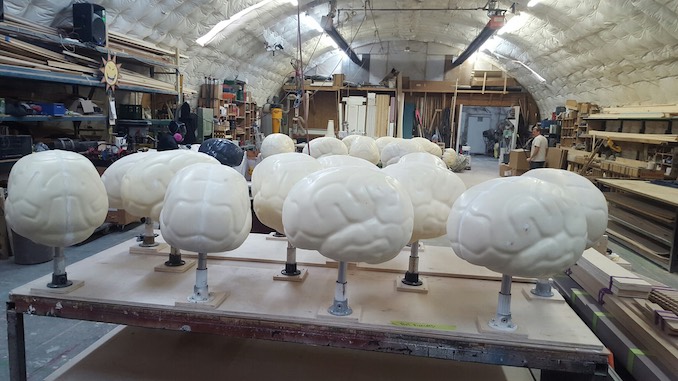 Launching June 3rd, 2016, The Brain Project presented by Telus, will feature the artists’ work to raise awareness, support and research into aging and brain health for Baycrest Health Sciences, a globally respected leader in geriatric residential living, healthcare research, innovation and education with focus on brain health and aging.

Over 100 artists and designers from arts backgrounds in fashion architecture, photography, painting and performance, are currently customizing their sculptures and getting ready for the city wide event. The brain sculptures will be on display at venues across Toronto including Nathan Phillips Square, The Distillery District, OCAD and more. The public will be invited to vote for their favourite designs and the sculptures will later be sold at an auction with proceeds going to Baycrest Health Sciences.

Erica Godfrey, who is co-chair of The Brain Project, along side her husband Noah and Ben and Jessica Mulroney, mentioned that the concept was inspired by the work created by artists who participated in The Faberge Big Egg Hunt in New York City. “I decided to develop a similar concept here in Toronto – an open air public art installation that would not only add interest to Toronto’s cityscape, but also allow us to support a great cause,” said Godfrey.

Artists from around the world were invited to submit their designs and were then selected by curators. The participating artists in The Brain Project that were recently announced include Mr. Brainwash, Karim Rashid, Gary Taxali, Samara Shuter, Jacqueline Poirier, Matthew Del Degan, Miyoshi Kondo, Dani Cooperman, George Pimentel, and many more. The full roster can be viewed at The Brain Project.

I had a sneak peek at Gary Taxali‘s work in progress for the art exhibition. His sculpture titled “My Heart Knows You” is his recognizable style of whimsical cartoon yet stirring. “I wanted to evoke an emotional connection between the person inflicted with this terrible condition and the people that love them.” said Gary Taxali.

Godfrey noted that her experience first-hand with close family members who have lived at Baycrest has opened her eyes on how important brain health is. “I am a big believer in what they do. I had a small idea that turned into a much bigger, exciting opportunity. The Brain Project was born by combining Toronto’s need for amazing public art with Baycrest’s mission to bring awareness to brain health. The Brain Project exists because no brain deserves to go blank.”

“There is an abundance of brain research happening at Bayrcrest’s Rotman Research Institute,” says Erica Godfrey, co-chair of The Brain Project. “Baycrest is known internationally for elder care and research to preserve memory and improve cognitive function for people of all ages – including those with trauma, stroke and brain diseases. Research is showing that proper diet, physical fitness, and a strong social support network are all important for brain health. Baycrest is also the home of the new Canadian Centre for Aging and Brain Health Innovation. The Brain Project will shine a light on how we all have a stake in its success.”

You can find out more information here: www.brainproject.ca

I got a chance to chat with owner Carrie Shibinsky and her Community Manager, Trish Cassling about their new website […]

Telus Launches Campaign to Donate $5000 to Your Local Charity

The holiday season reminds us to be grateful for what we have no matter how big or small. It’s a […]

You want to make the world a better place. SoJo wants to help you. The field of social entrepreneurship is […]