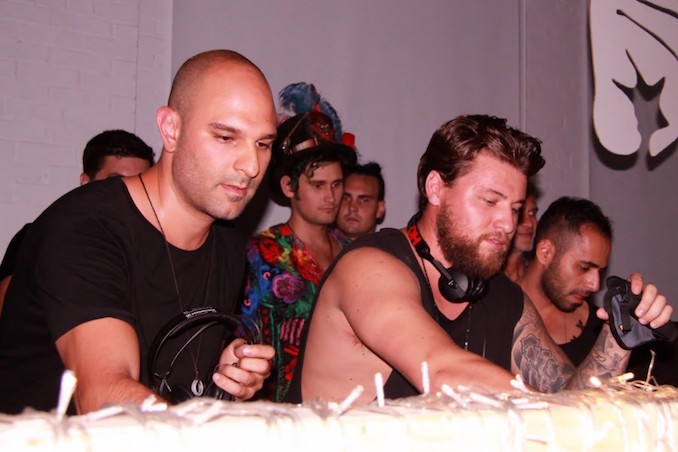 The SummerDaze crew ended their season with an electrifying 15 hour party this past weekend at District 28. The venue provided a unique landscape, where the SummerDaze crew: Tyrone Solomon, Adrian Ravelo, Nature of Music, Dirty Dale, Members Only, Alberto Jossue and Shea Marie, played an unforgettable, outdoor set between 2 and 10 PM. A costumed masseuse, colourful artists and face painters, gorgeous scantily-clothed bar staff, fringe décor and a wooden stage shaped like a ship, added to the magic and intrigue of the early hours.

At 10 PM, the party was moved inside, where papier-mâché hearts dangled from the ceiling, graffiti-styled art adorned the walls and hammock swings hung in a purple draped lounge area. This is when Toronto was introduced to the intoxicating energy, love and beats of the California based Desert Hearts Crew, including Mikey Lion, Lee Reynolds, Marbs, Porkchop, Kristoff, Deep Jesus and special guest NICE7.

While I could say more about this epic crew, fortunately they spoke for themselves on Sunday right before boarding a plane to Burning Man:

What is the story behind Desert Hearts, when and why was it created?

Deep Jesus: Desert Hearts was conceived back in 2011. We were attending a few small outdoor festivals that had a wide range of genres and vibes. It was late one night under the stars of the Mojave desert and Lee Reynolds was playing a ripping techno set. It was probably the only time we all danced the entire event. That’s when it dawned on us that we should just throw our own party with music that we enjoyed from start to finish.

After a few name debates we created Desert Hearts.

What philosophy or motto do Desert Hearts members live by?

Deep Jesus: There’s two mottos that really define the core of our community. First, we are all Desert Hearts. This pretty much states that everyone, whether they know it or not is a part of Desert Hearts. The community and connections that are made have a tremendous healing property. The entire intention behind Desert Hearts is to spread love and positive energy through music and community. We truly believe that the music and the vibe have the ability to create a better world. Second, HOUSE, TECHNO & LOVE…. That one’s pretty self-explanatory.

Desert Hearts often plays or hosts marathon styled shows. Why do you prefer this format?

Lee Reynolds: We prefer the marathon styled format of shows because we believe music is about a journey. All the core DJs offer a very unique and individual experience with their musical offerings. When all added in to the same equation, the result is something truly unique, rarely experienced. The longer we have to take our fans on a journey the better.

While many other crews are trying to throw larger and larger parties, Desert Hearts is known to put a cap on tickets. Why is that? Do you think you’ll ever go bigger?

Lee Reynolds: A cap was decided because we realized a huge characteristic about the events we host is intimacy. From experience we’ve noticed the larger a crowd gets the less connected everyone feels. The cap was implemented because money and fame isn’t our intention or desire. It’s all about the vibe.

Your events are known to be visually stunning. What’s the inspiration behind your set pieces? And what role do you think decor has on a show?

Porkchop: The inspiration behind our set pieces came from years of attending festivals from Lightning in a bottle to Burning Man. The goal was to create a visual stimulation that looked natural and cohesive with the surrounding environment yet stimulating enough to make you feel like you’re truly on a different planet. This is vital in an event because it adds to the overall experience people have and share. It gives them something to relate and share with each other.

This is the crews first time (at least performing) in Toronto, what do you think of the city?

Porkchop: Any time we head into a new city all expectations go out the window. And honestly that’s the best way to go into any event. The entire crew was completely blown away by Toronto. The people, the vibe, the scenery, it all really impressed us. After the fact, when we were all traveling to Burning Man, we couldn’t stop talking about how epic our experience was and how we can’t wait to be back!

What do you hope Torontonian’s got from your show last night?

Marbs: Our entire vision is to spread love and good energy through music and artistic experiences. Going to new cities and meeting different communities is a huge part of our movement and allows us to spread our vision with like-minded people. Toronto blew away any and all of our expectations. The people were incredible, the vibes were high, and the city was beautiful. We felt at home and we feel that the people who joined us for the event felt at home with us too.

Toronto is the last stop on your City Hearts, Summer of Love tour, what was a highlight of the tour?

Marbs: It’s really hard to pinpoint a specific highlight of the tour. Every city had their own special vibe, but they all meshed with us completely. It was really inspiring and special to meet so many new people and to experience these new communities while visiting their home towns. It was also an incredible experience for us as a group since this was our first tour together. We learned a ton about our vision, we grew together as a crew, and we’re more motivated about our goals than ever before.

Marbs: Well there were a lot of funny, crazy, bizarre moments. They’re pretty regular with our crew… but the one that stands out to me is our Los Angeles show. It was one of the biggest parties of the tour and probably the largest production of the tour. We’d been planning all the way up until late Thursday night before our event on Friday. I remember finally going to bed around 4am the night before the event. We have an online crew chat where we do most of our coordinating and communication online and when I woke up early Friday morning I saw a ton of messages … read through and found out that Mikey fell skateboarding late Thursday night and broke his arm. The break was so bad that the bone actually was out of the skin and he needed surgery. This left us short one of our core partners, a driver, and a truck for the production. We scrambled and had to borrow a box truck from my dad’s company in order to get the production to LA. We planned on getting to LA around 2 or 3pm and ended up getting there at 6pm. It was a total scramble and probably one of the hardest and most stressful set ups at any of our parties (except for the Apple Valley festival which had cops, helicopters, snow and hail of course. We’ll never forget that one). After everything it ended up being one of the best City Hearts parties we’ve ever thrown. Everyone was on fire and I think all the stress leading up to it made for a bigger release at the event. It was definitely one of the most bizarre situations of the tour.

Now that your tours done, what’s up next for Desert Hearts?

Marbs: As I’m writing this it’s the day after our Toronto party and we’re currently on a plane headed to burning man. This is something we look forward to year round. It’s going to be the perfect celebration to end the successful tour. After burning man we play the Reno decompression parties at GSR and then we’re off to the Symbiosis 10 year Anniversary the week after that. We couldn’t be happier or more excited for everything on the horizon. We’re also right in the middle of planning our 3 Year Anniversary Festival which will be November 5-9. We announced ticket sales last week and they will be available to the public on Sept 14. We have more art, music, and surprises than ever before … especially since we extended the festival to 100 hours of straight house, techno, & love. Also, watch out for some huge releases coming out on our label. We have a lot of big things planned for this year and can’t wait to share them with everyone.

Where do Desert Hearts hope to be in 5 years?

Mikey Lion: In five years we’d like to be touring the world with our City Hearts parties and spreading our message of love and positivity far and wide. We’re planning to keep our biannual Desert Hearts parties small and intimate around the 3500 person mark because that’s what keeps the vibe so love filled and incredible. The way we’re going to expand our brand and record label is through our City Hearts parties and other Hearts branded parties around the world. People are getting behind Desert Hearts Love Movement and everywhere we go seems to outdo the party before it. This movement is bigger than anything we could have ever imagined and it’s showing no signs of slowing down any time soon. Onward and upward as we spread love everywhere we go.

When can Toronto expect you back?

Mikey Lion: We haven’t really put much thought into our return trip to Toronto since our schedules are starting to revolve around Burning Man and our 3 Year Anniversary Festival. But after that party last night… Oh my god we can’t wait to come back! The amazing people of Toronto opened their arms wide and made us feel like we were partying at home! Ideally we’d like to throw quarterly parties it’s just a matter of executing it! We will 100% be back soon though! We love, love, love you guys!

And finally, what’s the story behind the top hat?

Mikey Lion: I got my top hat before my first Burning Man in 2011. It was basically my way of embracing the culture and letting my freak flag fly for the first time. That week was one of the most monumental, life changing weeks of my life and my top hat pretty much became a part of me ever since. It represents the counter culture movement that embodies Burning Man and Desert Hearts and reminds me every day why I’ve dedicated my life to what I’m doing. It’s my absolute baby and I feel naked if I party without it!

Otesho is a Toronto based electro-pop duo consisting of Shian Grace and Ted Carrick. Shian studied piano with Madoka Murata […]