Canada’s own Said the Whale has just released their studio album hawaiii via Hidden Pony Records. The album was co-produced by Tom Dobrzanski (The Zolas, We Are The City) and lead singer/songwriter Tyler Bancroft. hawaiii was mixed by Gus Van Go and Werner F (The Stills, Rah Rah). I got a chance to chat with with co-founding member Tyler Bancroft about the new record, favourite things about Toronto and the band’s thoughts on music purchasing vs. free downloading.

F: Congrats on the release of hawaiii this week. How’s the tour going so far?

Really well, thanks. We’re playing a lot of places for the first time here in the Eastern States, so it’s nice to see new cities.

F: You did the record with producer Tom Dobrzanski again, and Tyler, you’ve got a production credit on this album. How’d that come about?

My production credit on the album was unplanned and most a result of my desire for control. Some would just call that being a control freak, some would call it being a producer…

F: You documented a day in the life of your band in preparation for the new album on CBC MUSIC’s Instagram. Tell us about that.

I would NEVER post 9 photos in a day to Instagram, so that was stressful. My girlfriend helped me a lot by editing the photos and sending them back to me actually, which I guess makes me a cheater!

F: The recording process of this new album. Live off the floor or each person recorded it separately?

Drums bass and piano recorded as beds, guitar/vocals/etc were overdubs.

F: Songwriting: does everyone bring ideas or is it mainly Tyler & Ben and the rest of the band adds their magic to the mix?

It’s the latter for the most part – Ben and I write separately of the band and even of each other. We bring songs to the band in varied states of completion and go from there as a group. 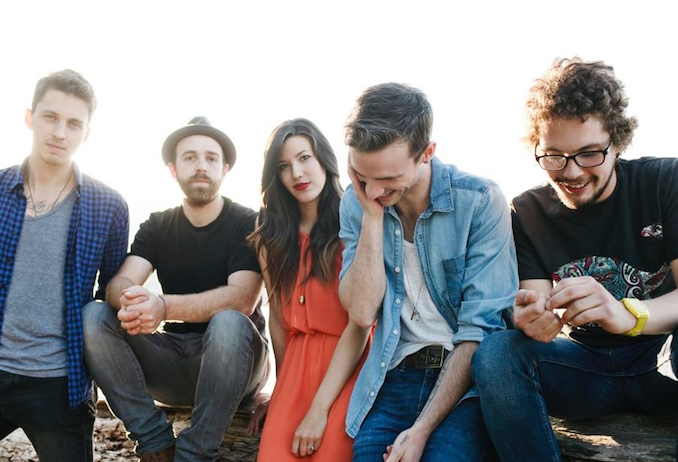 Tour stories are weird. People who don’t tour every day of their lives imagine that it’s this constant stream of debauchery and rock stardom, when in reality it’s mostly just a lot of sitting around in a van for 8-10 hours per day. We have great times through. We had a wild night in Hamilton for Supercrawl that ended in a drunken dance party at our labels office. I saw some videos the next day and hated myself.

F: Where do you see the band in 5 years? (5 year plan question…I know right?) And where do you want to be in the next 5 years?

That’s a really tough question to answer. I think the next two years will determine that. We’ve been a grinder band for 6.5 years now, but we can’t tour the way we do forever. It’s going to be interesting to see how we figure out a way to keep ourselves creatively and financially satisfied while maintaining some level of sanity with regards to touring and promoting. The goal is a long-lasting career in music, we know that much.

F: If you had to collaborate with one Toronto band, who would it be and why?

Right now the Dirty Nil. I want to learn to scream like that dude can.

F: You have a summer jam you’ve been listening to? (Summer ain’t over yet!)

F: Top 3 artists that have inspired you in your life?

I don’t think I’ve ever really had allegiance to one artist consistently in my life. In my preteens I was all about the 50s and 60s pop mixtapes. In my early teens it was all late 90s shit, Smashing Pumpkins, Green Day, etc. then I had a punk phase for a long time. Now it’s super eclectic – some top40, some Pitchforkey shit, and then whatever rocks in Canada.

F: Favourite thing about the city? ALWAYS something to do.

F: Favourite hang out in TO? Poutinis

F: Queen or College St? Wherever the show is closer to.

F: Trinity Bellwoods or Highpark? Never been to either.

F: You guys seem to embrace today’s age of downloading free music but really stress the importance of your fans to purchase your music. Tell us your thought on this.

I’ve voiced a lot of this on our website, but I’ll give you the coles notes – a lot of people have this assumption that when they buy music, all of their money goes to some massive evil corporation that exists to rip off artists. In reality, most artists, especially in the “indie” genre, are a lot more in control of their careers, and actually see quite a reasonable percentage of record sales. Another thing is that most of those artists are FAR less financially stable than the average fan assumes, so when people buy our music, it keeps us afloat.

F:What do you think of physical vs digital album sales? Do you have a preference? Any thoughts for the future?

I prefer physical myself for liner notes etc, but I don’t buy CDs. I buy vinyl and digital. CDs will go away soon I think.

F: You must be excited to perform at the Casby Awards in Toronto.

First timers, looking forward to it for sure.

F: What’s next for Said the Whale?

Watch the video for “I Love You” below

Said the Whale is currently on a national Canada tour promoting the new album and will be performing October 10 in Toronto at the CASBY AWARDS. Voting and ticket information is available here: http://www.edge.ca/contest/741/enterContest