Visitors to Toronto looking for an economical place to stay and a great opportunity to get acquainted with our awesome city, should definitely have Planet Traveler at the top of their list. Planet Traveler is not only located in the heart of the city at the top of Kensington Market and stacked with all the amenities a traveler could so desire, but also committed to sustainability and demonstrating the profitability of clean technology. The hostel is a testament to the vision of Anthony Aarts to build a one of a kind hostel and create a first class space for those who typically travel economy, combined with the ambition of Tom Rand to bring clean technology to life.

The story began back in 2006, when Anthony was running the original Planet Traveler – a small hostel on Augusta – and was inspired by a derelict building on college to expand his business. He sought out investor Tom Rand – Cleantech Lead Advisor at MaRS, self-proclaimed carbon geek, author, and speaker – who was happy to help finance the project and help Anthony realize his vision if it also included a mission to build the greenest hostel in North America.

Four years later, Planet Traveler opened its doors equipped with geothermal technology, LED lighting throughout the building, a photovoltaic array (a linked collection of solar panels that convert sunlight into electricity and supply energy to the city as part of the Feed in Tariff energy program), AND solar panels on the roof that capture heat from the sun and transfer it to hot water tanks to provide natural warm water throughout the hostel. Tom and Anthony are proud to boast that all of the technology is Canada made and demonstrates the economic opportunity that exists here in Canada if we did more to support the commercialization of clean technology and develop the domestic market.

You may be wondering: why haven’t other developers seized the opportunity to commit to sustainability, support our local economy and, when all is said and done, profit from it? As Tom points out, not all developers pay the bills. A developer or property manager who passes on the energy costs to future or existing tenants has zero motivation to install technology, such as geothermal, unless they know they can profit from it. This would require a more educated public that demands sustainability which, unfortunately, does not currently exist. Energy prices in North America are some of the lowest in the world and, until we put a higher price on energy, there will not be huge uptake. 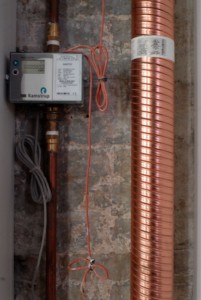 Heat from shower drains is reclaimed and used to warm up the cold water supply for the shower.

Despite the uphill battle, Tom Rand challenges others to do what has been done at Planet Traveler; retrofit or build utilizing existing technology and cut carbon by more than half. Tom hopes more people step up to take the challenge. Developers, property managers or tenants may claim a building is “green” or “sustainable”. However, Tom takes a hard stand on this and argues; “if you are not cutting your carbon by at least half, it is greenwash.” He firmly believes “if you are not dealing with carbon in a significant way, you are not dealing with the most important environmental problem of this generation.”  Tom states that his “purpose for getting involved in the project was, aside from it being a good investment, to see if we could lower carbon by 75%. Is it possible to do it at a profit? Turns out it is. Turns out it is easy, which is disturbing [to Tom] because if it is this easy why aren’t more people doing it?”

Great question, one I believe many of us – especially those who recognize the reality and dangers of climate change – ask. Why aren’t more people leveraging clean technology? “Energy is invisible to us and until we make the effort to make it more visible and we regard it NOT as a commodity for which we should pay lowest cost possible pricing, but regard it as a service from which we get functionality and we pay for the functionality, then we will continue to keep dodging this issue,” Tom explains. Tom brings forth the fact that the day will soon come when kids will ask, “What did you do when the earth started to get hot?” The question now is: will you have a good answer for them?

Most of us may not feel empowered to make a difference in the battle against the growing onslaught of climate change. However, there is always something to be done. Educating yourself and working to engage the broader public is certainly a movement that requires the help of those who can articulate the ever present dangers to our environment and identify the small and incremental changes that can be made. Those spearheading awareness raising initiatives include the David Suzuki Foundation, Greenpeace, Environmental Defence, and Sierra Club to name a few. Find out more by visiting their websites. See what you can do to promote green, clean, and sustainable initiatives that will help the local and global community and the environment in which we all live.

If you are a home or building owner, you can follow in the footsteps of Planet Traveler and participate in the Feed in Tariff (FIT) program, whereby a home or building can install a solar panel on its roof to provide energy to the grid and generate a monthly profit. This program has created an opportunity for people to participate in Ontario’s green energy movement. As Tom puts it, “it is a great big welcome mat to the general public to start producing green energy.” Ontario residents can engage either by renting roof space to a solar panel operator or by installing a solar panel themselves and taking the 14% return on the investment. Of course, the up front costs exist, but the ROI kicks in once energy starts flowing.

City view from the top of Planet Traveler

Sitting on the patio, under the shade of the photovoltaic array (used for the FIT program) and looking out at the stunning view of the city – one that could battle any of the luxury hotels in the city – Tom highlights the fact that together, he and Anthony built a beautiful space and, in their effort to be sustainable, did not have to sacrifice anything in terms of style or comfort.

RedefiningTO recommends you take a stroll along College, just west of Spadina where you will spot Planet Traveler (357 College Street). Take a look up top and see its solar panels soaking up the rays. Planet Traveler not only incorporated green energy solutions in the construction, but also made an effort to showcase the technology in its design so that visitors on the inside get a peek into how the building operates and those of us on the outside develop a curiosity to learn more. The idea is to raise awareness and inspire interest in the technology.

Anthony Aarts and Tom Rand demonstrate how people can combine vision, technology, and design for the benefit of the community and the environment in working towards redefiningTO.

Toronto Police Museum & Discovery Centre is located in the lobby of Police Headquarters at 40 College St. It is […]

The History of Toronto Architecture

Industrial Architecture The main factor of Toronto’s early prosperity in the nineteenth century was its harbour, the port serving as […]