I arrive slightly early at the theatre and get in line behind two lovely ladies. As I stand there I overhear conversations all around me but don’t take any of it in. The building is new and modern, with multiple theatres and performance spaces. I have never been here before so it is nice to take in the crowds of people milling about and the bright sunshine coming through the floor-to-ceiling windows. 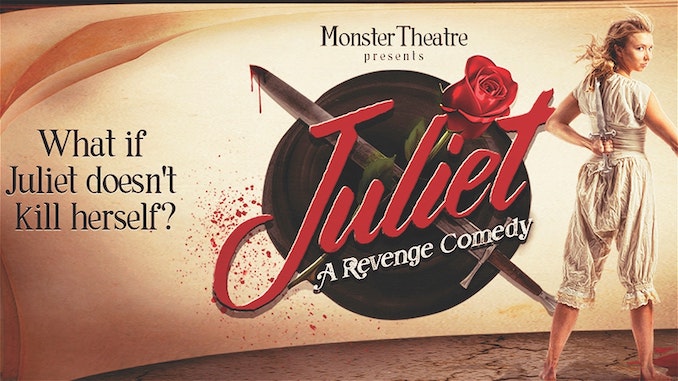 I can hear some music coming from Regent Park right across from the facility and for a moment I wonder if it’ll be loud enough to hear once in the theatre. The doors open and we calmly file in and as I take my seat I am happy to note the absence of outside noises in this intimate theatre. The seats are comfortable, the air conditioning is working and it does not take long for the play to begin.

Juliet: A Revenge Comedy was what I picked to see from the fantastic lineup at this year’s Fringe Fest. As a lover of the infamous Romeo and Juliet, it stuck out to me as something I would find interesting and, hopefully, funny.

Without giving too much of the plot away, Juliet somehow doesn’t find herself dead at the end of Shakespeare’s classic love story and goes on a quest to free herself (and then others) from the tyranny of an unknown force that is quite literally forcing her to kill herself. So yes, it is a play that is within a play or more accurately multiple plays. Meta would be another way to describe it.

Juliet is played by Lili Beaudoin who is either brave or crazy, as her character is almost never off stage, has most of the lines in a show with no intermission. The play runs about 60 minutes but this young actress seems to never run out of any steam, bringing courage and conviction to the role.

Her counterpart, Carly Pokoradi, is ridiculously talented and along with Beaudoin is on stage and in character for almost the entire thing. Pokoradi has an even bigger challenge as she plays, well, pretty much everyone else. She seamlessly moves between characters, sometimes within seconds of each other and how she keeps it all straight in her head I know not.

Beaudoin and Pokoradi are powerhouses in this play, carrying the audience on a fantastical and funny journey that questions Shakespeare’s treatment of women in his work. The freedom that Juliet and the other female characters are seeking echoes some of the current struggles women are facing, but without hitting you over the head with a message.

All in all, I really enjoyed watching Juliet: A Revenge Comedy, and if the quality of that play is anything like the others at Fringe Fest, then I would think that the organizers should be very proud.

It is on at the following times:

And if Juliet doesn’t seem to be your thing, then you can check out all the other marvellous plays around the city by going to: fringetoronto.com/fringe/shows

FEMMILLENNIAL is a contemporary dance theatre work by Choreographer Kylie Thompson that premiered at the 2022 Toronto Fringe Festival. The […]

“A Day in the Life” with Toronto actor/comedian Nadine Djoury

In 2012, Nadine Djoury joined my sketch comedy troupe, The Weaker Vessels, at the suggestion of our director Frank McAnulty. […]

“A Day in the Life” with Toronto creative Erika Batdorf

Erika Batdorf is from Nova Scotia and has been creating absolutely unique performance work for a LONG time. She loves […]