Our review of The One Ring Roleplaying Game, designed by Francesco Nepitello and Marco Maggi, published by Free League. Available now. 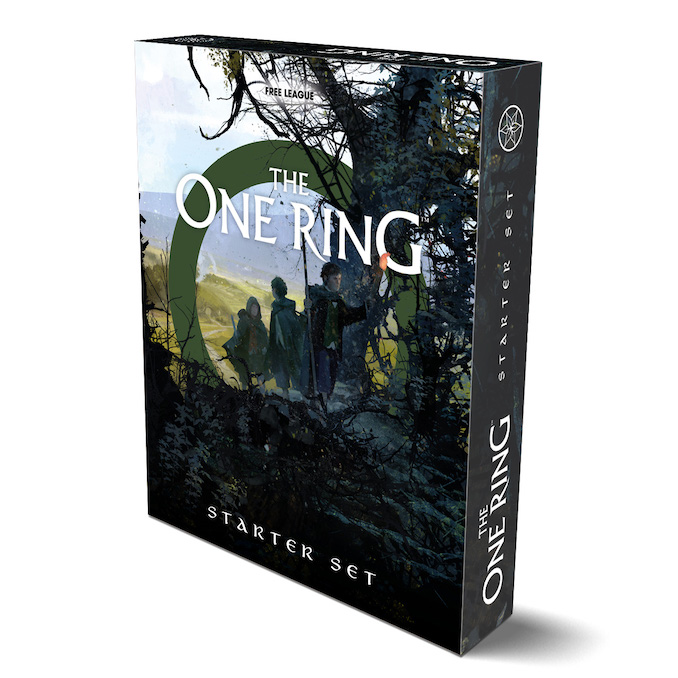 A tabletop RPG set in the loveliest little corner of Middle-earth. 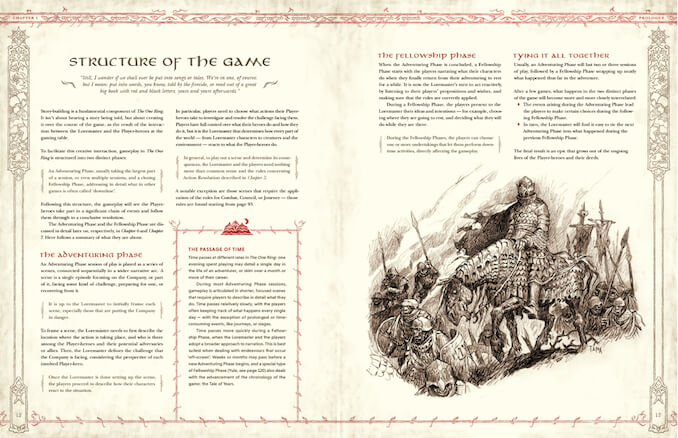 As early as 1958, barely three years after the publication of J.R.R. Tolkien’s Return of the King, sci-fi expo Worldcon was invaded by attendees dressed as their favourite characters from Middle-earth, upending a cardboard robot-dominated landscape that dated to the 1930s. The “Fellowship of the Ring”, a U.S.-based fan club, started up in 1960. Fanzines soon proliferated, and by the 1960s the Lord of the Rings had been lovingly adopted, bare hobbit feet and all, by the hippie movement. Much to the chagrin of Tolkien, I might add, who had decidedly fusty views about flower children and rock ‘n roll music.

The Lord of the Rings fandom was not the first fandom (that honour goes to Sherlock Holmes), but it marked a major shift in popular culture. Prior to Lord of the Rings, most fantasy literature was limited to the kind of shlocky, bare-chested nonsense you’d find in a Conan the Barbarian paperback. Lord of the Rings, however, was taken seriously by respectable people, even as it was also taken up by nerds already embedded within the sci-fi/fantasy subcultures of the era. The success of Rings, and Rings fandom, paved the way for modern fantasy literature, and had a profound influence on comic books, film, board games, video games, and, of course, Dungeons & Dragons.

The first edition of D&D landed in 1974, co-creators Gary Gygax and Dave Arneson cobbling together an off-brand Tolkienesque fantasy, replete with dwarves, dragons, orcs, trolls, and even a Balrog. D&D was, and remains, a celebration of our imaginative capacity, generating epic adventures through little more than pen, paper, and a handful of dice. The phenomenon of D&D itself gave rise to the entire tabletop RPG genre; all those games in which an all-seeing narrator (D&D‘s “Dungeonmaster”) guides a group of companions – players are encouraged to stay in-character – through a series of confrontations (battle with orcs!) and skill tests (unlock the door!), on the way to fulfilling one overarching objective (steal the dragon’s gold!). There are horror RPGs (H.P. Lovecraft also had a major influence on the genre), sci-fi RPGs (there’s a recent one set in the Alien universe), and, in a nice throwback to the original fandom, a number of Sherlock Holmes RPGs as well.

And since almost the very start, there have been Lord of the Rings RPGs. 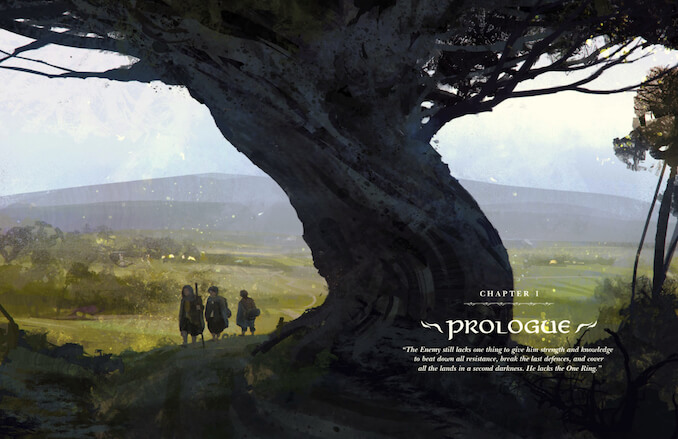 There’s something immensely appealing about putting on a wizard’s hat (real or imaginary), gathering a group of friends, and play-acting your way through a fantasy adventure. Or so I’d been told; prior to The One Ring, nerdy ole me had never actually sat down for a tabletop RPG, not even D&D as a kid. (Those Stranger Things kids make me jealous.)

Novices be warned: starting off in The One Ring can be daunting. There’s a big chunky book of rules, another slightly less chunky “adventure compendium” containing the scenarios you’ll work your way through, and then various other maps, character sheets, and stat trackers to guide you on your journey. The One Ring is meant to be played in marathon sessions and repeat gatherings. It’s meant to be played with Howard Shore’s extended The Lord of the Rings soundtrack blasting in repeat in the background. It’s meant to be played by nerds, albeit in a contemporary culture that elevates nerdiness to unironically “cool” status.

Like D&D before it, The One Ring is far less difficult than it at first appears. All you have to do is read. Everything. Back and forth. More than once.

That might seem annoying, especially given the size of the core set, but it’s a necessary evil of all tabletop RPGs. In order to understand the game’s many systems, you need to read its clear and detailed instructions. In order to understand what’s going on, who the characters are, where you are, you need to read the relevant “episode” in the adventure compendium. It all takes time, and it sounds best when read out loud with someone in a British or faux-British accent, but it can be done. 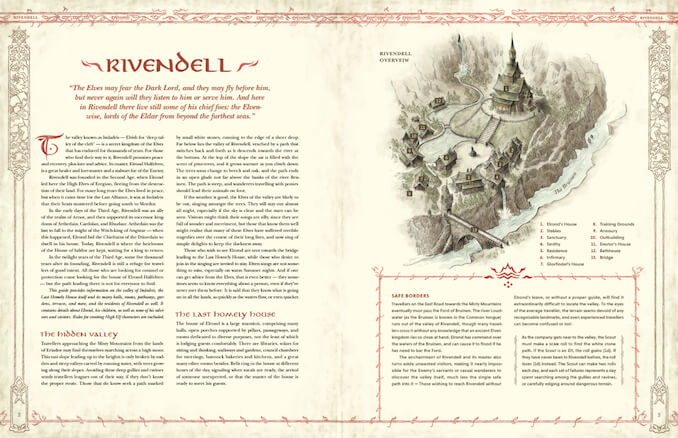 The One Ring is a tabletop RPG that can be played by up to six players – a team of five hobbits plus one “Loremaster”.

Proceedings are always overseen by the Loremaster, whose job it is to read out the adventure, describe the various obstacles/enemies/challenges the team encounters, and act as a sort of omnipotent arbiter, deciding the outcome of any given encounter. If you’re anything like me, you will be an exceedingly generous Loremaster, allowing the hobbits the space to retry encounters, or giving them the chance to find an alternative path to success. In certain respects, The One Ring is designed this way: rather than work from a strict set of predetermined outcomes, the Loremaster is encouraged to let the hobbits come up with their own approaches, roll the necessary dice to “test” the relevant attributes (more on this below), and then, when all is said and done, evaluate the hobbits based not strictly on numbers, but their faithfulness to the lore. As Loremaster, it’s perfectly acceptable to tell the hobbits their attack came up short, but the enemy orc slipped on some spilled beer on the floor of the tavern and they won anyway.

Each turn in The One Ring consists of two phases: during the Adventuring Phase, players encounter obstacles/encounters that must be overcome in order to proceed. Maybe there’s a pesky locked door to break through to steal a key item. Maybe some local ruffians are itching for a fight. Working together, the hobbit team comes up with a plan of attack – should we try to talk to the bad guys first? create a distraction? draw swords? – and then roll dice based on stats in relevant categories. Each hobbit character is custom designed by a single player, who will roleplay as that hobbit throughout that experience. There are some basic templates to work from, including suggested point allocations to distribute across a character’s attributes, and the whole idea is to come up with a hobbit reflecting your chosen skill set and personality. For example, one player may choose to assign more points to Strength, while another has more Heart, or Wits. These three attributes – Strength, Heart, Wits – inform your characters’ success rate during Encounters. For example, a character with more Strength will have more facility with a sword. A character with Wits might be able to talk the team’s way out of a confrontation, avoiding battle entirely. Again, the Loremaster is always present, issuing decisions on whether a particular gambit was successful.

You are, of course, encouraged to name your character. I suggest the Hobbit Name Generator if you’re struggling.

The second phase is the Fellowship Phase. In effect, this is the rest interval, allowing each player the time to upgrade their characters or reallocate attributes based on “Experience Points” acquired while adventuring. Thematically, this phase represents the hobbits’ journey between destinations, with pauses at inns or other safe havens along the way. During the Fellowship Phase, the hobbits can also select from several thematic “Undertakings” – in effect, gameplay enhancements – with the help of the Loremaster. For example, choose “Gather Rumours” and the Loremaster will provide a hint about an upcoming objective; decide to “Study Magical Items” and the hobbits will unlock the potential of certain items in their possession. You can even “Write a Song”, which later provides a stat boost if you sing it during an Adventuring Phase. And yes, you are encouraged to actually sing. 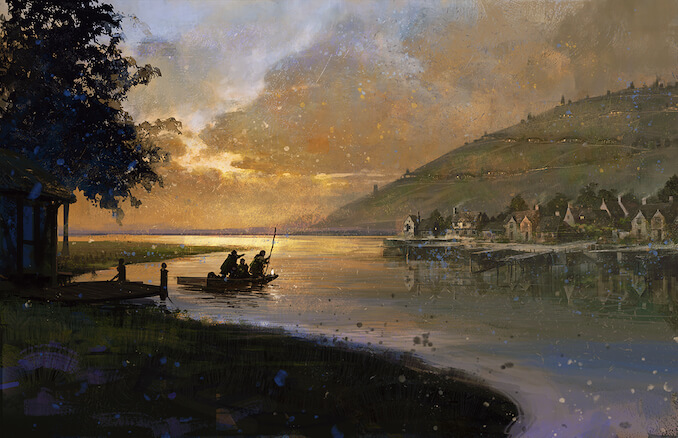 NOT ALL THOSE WHO WANDER ARE LOST

From what we’ve seen of The One Ring so far it’s an amusing, at-times exciting romp through Middle-earth with a group of superficially unheroic characters. Even among hobbits, the protagonists of The One Ring are far from the Sam Gamgees or Frodo Bagginses of the books. Instead, they’re more of a Fatty Bolger or Farmer Maggot type: characters who intersect fleetingly with the more famous adventure, but live otherwise quiet lives. Or so we thought: The One Ring basically functions as a second look at those characters, in which we “learn” that they too had had one or two misadventures, albeit not the type that gets preserved in history books. The presence of mission objectives like “locate the missing fireworks” or “go for a Hobbit walking party” should give you an idea of the flavour of The One Ring.

Which is not to say that The One Ring is low stakes. The adventures these hobbits go on are of major consequence for their small lives, and it’s a rare session that goes by without at least one interesting encounter with an aspect of the “shadow rising in the East.” It’s here, where The One Ring tangentially acknowledges the greater Middle-earth conflict, that The One Ring plays best: you get to confront a troll, or cross paths with a mysterious Ranger (no, not that one), all without violating the canonical stories of Frodo and Gandalf and the gang. That said, you do, at times, have the chance to hang out with some familiar faces, including certain “Patron” characters controlled by the Loremaster. These Patrons drop by to offer aid to this rather less famous fellowship, while also providing the most direct connection to the events of The Hobbit and The Lord of The Rings.

Speaking of connections to the books, the art in The One Ring is mostly courtesy of legendary (and Canadian!) Middle-earth specialist John Howe. Vancouver-born Howe has been illustrating Tolkien’s worlds since the 1980s, his beautiful watercolours providing inspiration for the Peter Jackson film trilogy and gracing the pages of the best illustrated editions of Tolkien’s books. Howe’s singular talent is on full display here, elevating what is already a lovingly designed tabletop game into truly one of the best looking RPGs ever made. I could spend hours poring over the beautifully illustrated rule books that come with The One Ring, simply admiring Howe’s evocative work.

There’s little chance that Tolkien would have liked or even approved of the multimedia behemoth that The Lords of the Rings has become. Tolkien resisted selling off the film rights until near the end of his life, and he would be aghast at the notion of The Hobbit being distended into a crassly CGIfied film trilogy, let alone the existence of a Middle-earth TV series, video game, or, if he even could wrap his around it, something like The One Ring. However, a creator’s own intentions are not the only arbiter of authenticity, and speaking as someone who appreciates Jackson’s original film trilogy, I can respect certain adaptations for what they are. Which is to say, The One Ring, like other adaptations before it, is a riff on the original, which does not so much distract from the text as tell a slightly different story. The beauty and poetry of Tolkien’s original text will always be there, and its relative absence from a tabletop RPG or film adaptation does not negate the legitimacy of those things. The One Ring is fun, and if you love the world of Middle-earth, it provides a great opportunity to play around in it.

Visit the official website for The One Ring here.

Overboss (Board Game) Review: A Secret to Everybody

Our review of Overboss: A Boss Monster Adventure, designed by Aaron Mesburne and Kevin Russ, published by Brotherwise Games. Available […]