Julie Kim is a stand-up comedian and writer who headlines comedy clubs across Canada and the United States. She has been featured on national television and radio multiple times (the Winnipeg Comedy Festival, Just for Laughs Northwest, the Halifax Comedy Festival, and much more). Julie’s been a writer and on-camera talent for CBC’s The Debaters, Laugh out Loud, CBC’s Kim’s Convenience (a tiny bit as an occasional guest in the writer’s room), and more. Her comedy credits are among the best in the country. She is a writer and creative consultant for the Winnipeg Comedy Festival and will be returning for her third TV gala in May 2022. 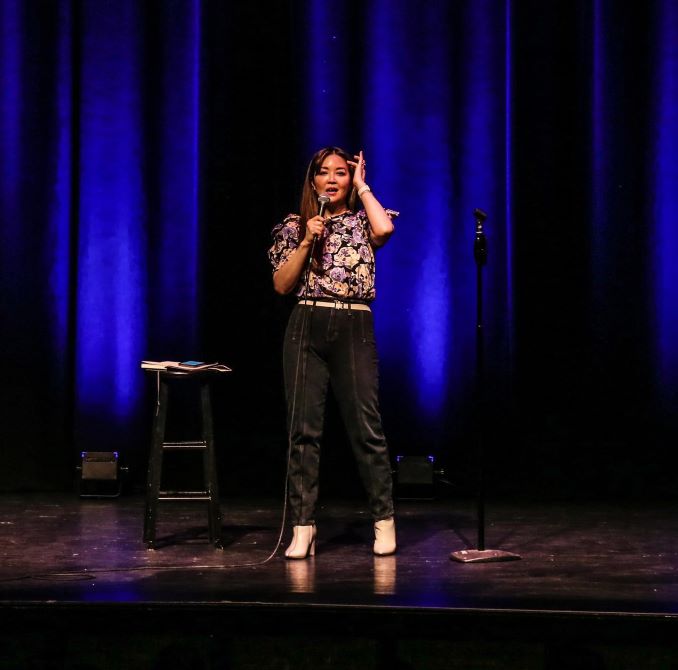 There are so many! I’ve always looked to Seinfeld as a standard for word efficiency and zeroing in on the funny. Other than that it’s a real mixed bag, as there are different things to admire about different comedians. In the past few years, I’ve relied on my own instincts to write and say what’s funny to me.

I didn’t have a favourite comedian, but I loved comedy in general. Sitcoms, Saturday Night Live, and any stand-up special I could catch. I remember watching Robin Williams and being in awe of his quick wit and energy; it stuck with me and gave me an appreciation for the intellect and confidence that stand-up comedy required.

I really don’t have one! When I’m doing shows in town I often rush out of home after dinner with my family and usually just as my kid’s nighttime routine is starting. Sometimes there are tears (my daughter never likes it when I leave and asks me why people even have to work – I say it’s so that people can be away from their kids for a while). 🙂

I mainly try to be in a good mental and emotional state, which is one where I am prepared for the jokes I’m doing and clear-headed enough to deliver them well. I also need to be rested enough to not trip over my words or not be ready for riffing with the audience as required.

Well, I just had an amazing experience in Toronto performing at Massey Hall with Ronny Chieng. It was the first comedy show at the renovated venue and it was so beautiful and also perfect for comedy with its relatively short depth from the stage. It was a dream to perform there in the city where I was born and raised and where I started stand-up comedy over 10 years ago.

I’m glad to tell you that I don’t have a favourite bit. I write them, say them, iterate and improve on them, and then they are gone or become a smaller part of my act. One of the most important parts of being a stand-up comedian is constantly writing and improving on my act.

I’ve probably discovered new and other comedians mostly on Instagram Reels. They pop up and I usually don’t scroll past them.

I always say that I really miss Toronto for its hustle, culture, true multiculturalism, and soul. Yet I’m in Vancouver, and I think I’m here for the beautiful nature and mild climate. I often joke to friends that living in Vancouver is like dating a really hot guy with no personality.

Oh yes! I’m really excited to be returning to Toronto for my own show at The Comedy Bar on April 17th.

I know I’m forgetting some but it’s not like I’m giving an Oscars acceptance speech here. There’s so much talent in Canada! Definitely also check out that Seinfeld guy I mentioned.

“A Day In The Life” with actress, writer and director, Laura Adamo

To know Laura Adamo is to understand that as the daughter of self-made immigrants, she knows how to hustle. I’m […]

We’re on the hunt for Toronto’s funniest residents! This week, we spoke to Cathy Boyd to learn more about her […]