Leafs Nation is a serious one. It’s more than a game, it’s life. Now diehard fans and curious ones can get behind the scenes in the latest Amazon docuseries All or Nothing: The Toronto Maple Leafs. The five-part mini-series narrated by Will Arnett launches on Prime Video on October 1st and follows the hockey team’s 2020-2021 season as the coaches and players take to the ice during Covid times.

Brendan Shanahan, Leafs President explains in the press material about when the idea of the show was first pitched to them he wanted to make sure that none of the footage be released until after the season was done to help limit distractions in an already challenging year. “…in Toronto, obviously there’s a lot of interest in the team, some of that is beneficial, and some of it is not. Therefore, we understand there is going to be a lot of scrutiny, and a lot of talk. So we try our best to sort of limit as many distractions as possible during the season. While at the same time, we know that we have a fan base that wants to see the players, they want to see more, and there’s a responsibility, and sort of a privilege, in being in that position in Toronto. So I think the idea of knowing the inevitable things that are going to pop up during the season, thats seen at times as distractions, that sort of exists for every team, we weren’t going to be creating a whole bunch of brand new ones and challenges for the players. Beyond that though we are fans of the show I think that this generation of players, they’ve grown to become very comfortable with cameras and microphones, catching them doing all the things.” 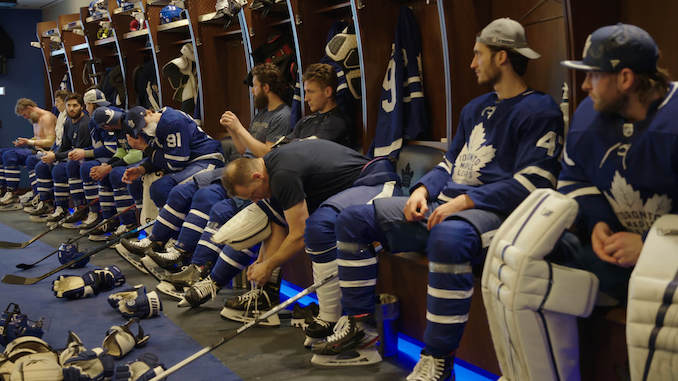 Defenseman Justin Holl tells us in our interview that the season was definitely a challenging and the series touches on what that was like for the players and coaches during this pandemic. “It was a weird season. There were no fans at the games and we weren’t allowed to go anywhere outside of the rink,” said Holl.  “Also, our significant others were here and not able to do anything so that was tough for them.”

The series gives the audience both perspectives on and off the ice. With a camera crew following them, one would think that was pretty intrusive but as Holl mentioned, it was  something most of them were already accustomed to with the team’s show, The Blueprint. “We had cameras in the dressing room that were automated so it was a little different but at the same time we just were as natural as possible. We were use to it.”

And what about the media pressures? There’s been a growing awareness about how interviews are impacting younger players and with social media everyone has a say. Not only are you dealing with journalists sometimes beating you down but now there’s an instant reaction to everything by anyone but Holl tells us he takes everything in stride. “Anyone can put their opinion out there. You might get some mean tweets after a bad game. It is what it is. A lot of people are going to say stuff online so it’s futile to even worry about it. I have a pretty good idea if I’ve played well or not and that’s what really matters for me.”

But is it hard to turn off? “Yeah, sometimes but the only time it hurts is if it’s true, you know? But it hurts because you feel like you’re not helping the team not because someone says you’re bad,” said Holl.

And we all know that Leafs fans are relentless. But are they any different from other hockey fans? Holl tells us that Leafs fans are one-of-a-kind. “There’s no fan base as passionate about their team as the Leafs fan base. I think it’s really special to play here, honestly, where people care so much it’s a lot of fun.”

And what about the younger fans? He tells us that growing up and watching a game on television or to be able to see someone they know from their town or school will always be exciting. “When I was younger I always thought it was cool to see players and now to go full circle for the younger kids wanting signed jerseys is really cool.”

The docuseries is good for more than diehard Leafs fans? “For sure! I really enjoyed the All or Nothing Series. I’ve seen a few of the football and soccer ones. It’s a really entertaining show!”

All or Nothing: Toronto Maple Leafs is produced by Amazon Studios, NHL Original Productions, and Cream Films is set to launch on October 1st in 240 countries and Territories. Here’s the official trailer …

About Sonya Davidson 792 Articles
Born and raised in Toronto, this city girl covers the latest in arts, culture, food, and style. She also shares interesting stories about Toronto's people, places, and things. Follow @theculturepearl on Instagram and Twitter.
Twitter

The Plus Minus: Toronto’s Binnington and the St. Louis Blues

This season for the St Louis Blues has been one of disappointment, then inspiration and finally redemption.Their success has come […]

Prior to the Toronto International Film Festival in Toronto, when Toronto Fashion Week was just kicking off, we got a […]

For our latest trip away from Toronto, I decided to take a deeper look at the city of Guelph in Ontario, […]