Calgary sits amongst an abundance of natural beauty, situated just below the Rockies and surrounded plentifully by national parks, rivers, and lakes. With such an affluence of wilderness combined with the major metropolitan centre of Alberta comes a rich history that informs the present as well as a variety of visual and musical artists who draw inspiration from their surroundings. This guide will direct you to some historical sites, visual artists, and musicians in Calgary. 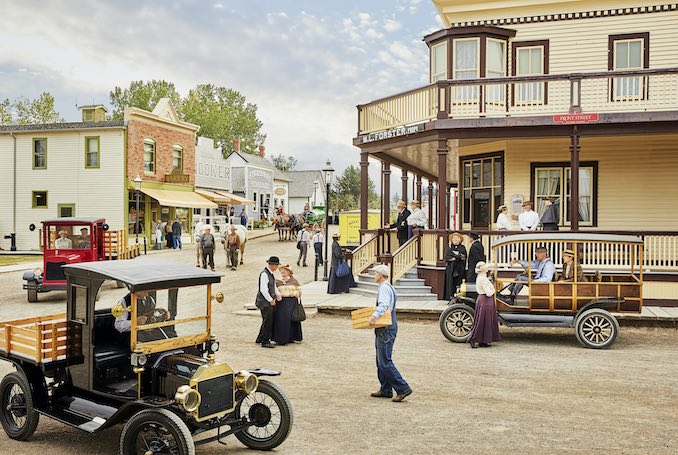 Start from the beginning and discover the city and its surrounding neighbours through their pasts.

Heritage Park Historical Village is one of Calgary’s premier tourist attractions and one of North America’s largest and most successful living history museums, since opening July 1, 1964. The exhibits expose visitors to over 100 years of historical education, spanning from the early 1860s fur trade to the petroleum and automobile-dominated 1950s. The Park aims to connect people with the settlement of Western Canada and preserve Calgary’s culture and heritage.

Glacier National Park and Yoho National Park, both established in 1866, currently hold the title of second oldest national parks in Canada, second only to Banff. After the Canadian Pacific was completed the year prior, the breathtaking natural scenery of the Rocky Mountains in Alberta and British Columbia indicated that the area surrounding the railway had a great tourism potential. Thus, lodges and hotels were built to enhance the uncharted wilderness and encourage visitors to enjoy previously unvisited areas of the country.

Fort Edmonton was founded by the Hudson’s Bay Company in 1795 along the banks of the North Saskatchewan River. Acting as a trading post, it was deliberately established adjacent to the North West Company’s Fort Augustus, which was their main competitor. The two corporations eventually merged in 1821, leaving Fort Edmonton as the fur trading epicentre in the Saskatchewan District.

Visit the Calgary Guardian website to find out more about Calgary and Alberta History.

Terri Heinrichs is a Calgary based visual artist who works primarily with oils and gains inspiration from the scenery around her. Her recent “Vivid Impressions” series is an explosion of colour and texture on the canvas, and was inspired by her unique interpretation of landscapes and trees. Her use of creamy oil paint creates a thick, lush texture, which adds dimension to each painting and brings a energetic and refreshingly new perspective of the mountainous Canadian landscape.

Amogh Katyayan is a visual artist based in Calgary who was originally born in the remote foothills of the Himalayas in India. Amogh is most commonly known for his lively and expressive signature style, which can be interpreted from his use of colourful backdrops and choice of vibrant acrylic paints. He then uses pastels to illustrate the figures he sees within the backdrop he painted. He has also experimented with several other mediums throughout this career, including resin pour painting, sculpture, and woodworking.

Jarett Sitter has a BFA in New Media from the University of Lethbridge, and has dedicated his life to animation and illustration. Through his artwork, Sitter aims to synthesize opposing concepts into one synchronous product. By focusing on the juxtapositions and binaries of life as the basis for his art, Sitter is able to incorporate sophistication and class into illustrations and animations to tell vividly imaginative stories full of lovable characters and pop culture references.

Michael Bernard Fitzgerald is a Canadian singer/songwriter who has garnered a nationwide audience who appreciate his honest lyrics in the 4 albums that he has released. Fitzgerald has spent his career since 2006 creating music, touring, and connecting with audiences, and throughout the last 10 years has collaborated with top-tier L.A. songwriters and producers including Jon Levine (Drake, Dua Lipa), Brian West (Maroon 5, K’naan), and Dennis Herring (Ra-Ra Riot, Modest Mouse). He has even appeared on chart-topping tracks such as “I Wanna Make it With You” (2016) and “One Love” (2016).

Stonegate is a rock band from Southern Alberta consisting of Marcus Steiner (vocals), Robbie Bailey (guitar), Taylor McPhail (guitar), Corey Mifflin (bass) and Luke Thompson (drums). Since its formation in early 2020, they have focused on creating new music that blends the nostalgic sounds of rock from the 90s and 2000s with some modern elements. Thus far, Stonegate has released four singles: “Fly Away,” “Southern Dust,” “Chatter” and “Victim.”, and have been in the midst of recording 5 new singles this Spring.

Jocelyn Alice is a platinum-selling Canadian singer and songwriter, known for her heartfelt lyrics and her powerful yet soulful vocal presence. Alice rose to fame with her 2015 breakout summer song, “Jackpot.”, which topped radio and sales charts, eventually being granted platinum certification in Canada. Since then, Jocelyn’s songs have received over 100 million streams, including her latest single “Sweetheart”, her collaboration with R3hab, “Radio Silence” (Canada top 25 radio hit), her single “I Know” (Canada top 20 radio hit), her Gold-certified single “Bound To You” (Canada top 15 radio hit), and her Gold-certified track “Feels Right”.