First there was a giant duck, then there was Borat and we even spotted the larger than life Xbox Series X console on our waterways. Now, we’re excited to learn that Theodore TOO, the 65 foot life-size reproduction of Canada’s beloved “Theodore Tugboat” will embark on an important mission this summer. Get your cameras and phones ready! Beginning June 10, the famous childhood favourite TV character will make his way along the shores starting in Halifax and eventually ending at the Port of Hamilton. In a collaboration with Swim Drink Fish, a national water education and conservation advocate, Theodore Too will serve as Ambassador delivering the organization’s messages and raising awareness about their sustainable efforts as well as other initiatives including the Great Lakes Guide, initiatives including community connection to water, promoting employment in the shore-based industries, water conservation and restoration strategies of the Great Lakes.

Theodore TOO was built at Snyder’s Shipyard in Dayspring, Nova Scotia and launched on April 19, 2000. The tugboat is a reproduction of the famous TV character Theodore Tugboat from the beloved CBC children’s series of the same name.

“Our hope is for Theodore TOO to bring awareness to both sailing and shore-based job opportunities, shining a bright light on industries supporting Canada’s supply chain including ports, cargo terminals, shipyards, offshore supply bases and shore-based manufacturing. The McKeil family is incredibly humbled and proud to be a part of Theodore TOO’s legacy and exciting future helping an entire sector and waterways continue to flourish on what we hope will be a sustainable and competitive tide while helping to pass along Canada’s rich land and sea knowledge, history, and skills to future generations,” says Theodore TOO owner, Blair McKeil. 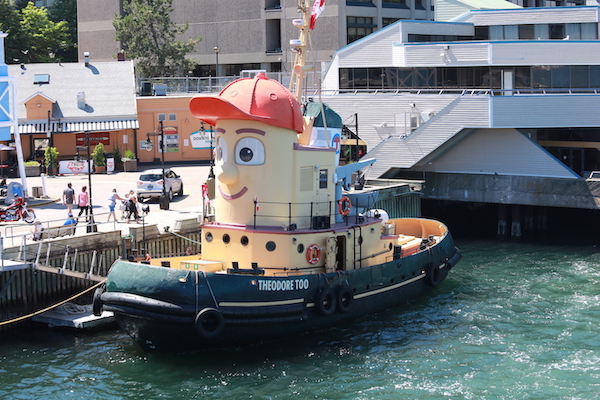 A four-person crew will push off on June 10 from Halifax and will end its journey in Port of Hamilton where he will make his home. Theodore TOO will also then be converted to biodiesel signalling his future efforts as a sustainable champion.

Due to COVID restrictions, public safety considerations and provisional mandates, the tugboat will not be inviting the public on board at the various ports during this trip. However, photos are welcomed from a distance. The public can follow Theodore TOO’s trip on the Vessel Finder app (free) to find out when he will be in town (including Toronto & GTA).

You can also learn more about Swim Drink Fish here. We found many useful resources on the site including their Swim Guide that helps visitors find out the latest  beach and recreational news including water quality conditions as well as locations of public beaches. The Great Lakes Guide can be found here.

Theodore Too has arrived in Toronto

Accompanied by a welcoming flotilla, Theodore Too, a 65-foot working replica of Theodore Tugboat from the popular Thomas the Tank […]