The Tony Award winning musical Dear Evan Hansen has settled into the Royal Alexandra Theatre and looks like it will be sticking around for an extended amount of time. Due to popular demand, the show in Toronto will now run until September 29, 2019.

The storyline delves into issues teens and families can relate to in today’s world. Dealing with anxiety on top of all the pressures of being a teen isn’t easy and yes, social media plays a part. Evan Hansen is a 17 year old high school student who gets caught up in a lie that shouldn’t have happened in the first place.  His therapist recommends that he writes a letter to himself each day. “Dear Evan Hansen…” Unfortunately that letter lands in the hands of another student who takes his own life. Evan finds himself in an awkward situation but is conflicted as he finally experiences that sense of belonging.

Robert Markus plays the role of Evan with incredible conviction. He embraces the character with ease that you would think he was always meant for this complex role. The script is fast-paced and attention grabbing with music that stays with you long after you’ve seen the show. Yes, we have the playlist on repeat. 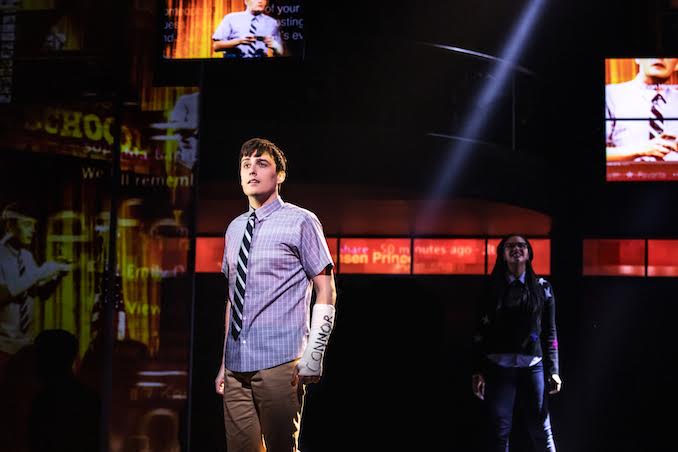 We had a chance to chat with Robert Markus recently …

RM: It’s very exciting and very overwhelming. But honestly I’m very honoured to be part of this and to be asked to play this role. It is particularly thrilling to be able to tell a story with a Canadian cast.

The cast is from all different parts of the country?

RM: Yes, it’s a pretty incredible cast from Medicine Hat to Nova Scotia. I’m originally from Vancouver but I live in Stratford now.

You’ve met the cast in New York, what kind of advice have they given you?

RM: The cast was so lovely and we loved meeting them. Their advice was to “keep truckin’! Keep making those discoveries and cherish this experience because it doesn’t come around a whole lot.  It’s a particularly timely piece and it’s so thrilling musically. The script is excellent. The production as a whole is so well conceived.

It’s a relatively new show yet it’s caught a lot of attention. Why is that?

RM: The themes of the show are so universal. It’s not just about this young man, it’s about a family that is broken over grief and the relationship they have with this young man, his mom and the girl he’s  in love with. There are so many things involved that is beyond this 17 year old who has issues connecting to the world.

The topics are so important in this show but one that I found really interesting is how people feel this sense of ownership, even in a tragic circumstance. But what really hits home for you in Dear Evan Hansen?

RM: Absolutely, people have onus over it. We are all looking for a way to connect. I had a similar experience. A friend of mine took his own life and I think that dealing with the exploration of self after something like that happens is monumental. That’s what I find really interesting about this show. It’s the ability to dive into discovering who we really are and how our relationships change. How we develop as people and to explore our own identities this is such an exciting piece for that. Not all shows have the opportunity, and score, to be able to sing through those emotions and thoughts. It’s really amazing to perform in this show because you are representing anyone with those thoughts or going through those experiences. So, it’s particularly overwhelming.

How do you push through every night because it is such an emotional story?

RM: I think holding on to the fact that I am representing people who have had those thoughts and who have explored, or exploring, who they are after a traumatic incident. This  is important for me to remember. I feel like I’m an ambassador for this tale and it’s exciting to tell this story to the audience .

The Story Behind Dear Evan Hansen