Each year, I count myself as doubly-lucky. Like many asians in the western world, we are fortunate to usher in the  New Year twice. One is the western culture with countdowns at midnight, party favours and raising a glass while singing Auld Lang Syng while other is based on Lunar calendar – which has the fresh start date changing every year. The Lunar New Year celebrations have always been more complex and intertwined with traditions and superstitions for our culture. The Lunar New Year is celebrated not just for one night but for two weeks. Each day is symbolic and so are what we eat, give, say and do.  The ultimate goal is to hope the Gods bring good health, happiness and prosperity to you and your family. Curious? The Royal Ontario Museum (ROM) current original exhibition GODS IN MY HOME: Chinese Ancestor Portraits and Deity Prints explores the underlying themes pertaining to Chinese New Year and it’s fascinating even for me.

Over 100 paintings, portraits, and objects spanning from the late Imperial period to the early 20th century Republic era are now on display in the exhibition and some that have never been shown to the public. Nine large scale paintings on display were commissioned by wealthy families. Also found are popular prints that were created on ordinary paper that served as talisman to ward off evil spirits and bless the family home.  Great explanations of other lucky symbols and objects are also offered along side painting and prints. An example, pomegranates are popular to display in the home not only because they are red and colourful but the many seeds also represent the wishes of many children. Some of humorous for us today but still respected.

The ROM has the second largest permanent collection of Asian artifacts and arts outside of China. This exhibition focuses on images that reflect the Chinese belief that portraits and deity prints are capable of protecting and blessing families. From regular households to Imperial palaces it explore the connection between the domestic, material and spiritual life.

Aside from the exhibition there are a few special events planned including a talk on Remembering the Ancestors: Chinese New Year Celebrate with Ancestor Portraits and Prints on February 14 lead by ROM Senior Curator Wen-chien Cheng. 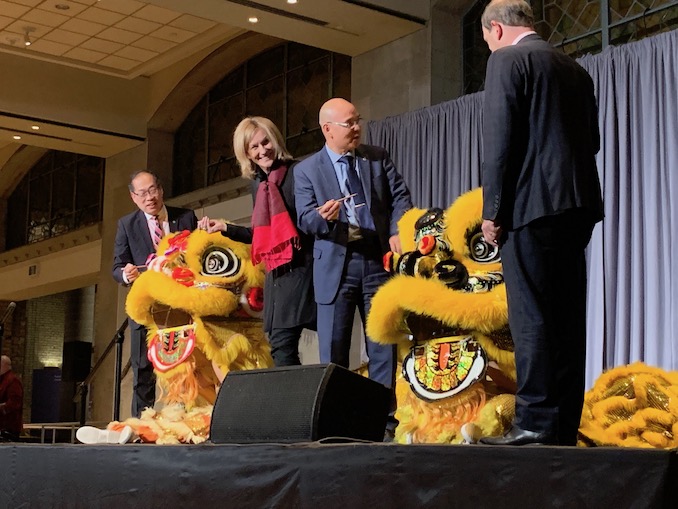 The exhibition’s official opening ceremony treated ROM members and dignitaries to a night of traditional lion dance and a concert with acclaimed erhu musician, George Gao.

GODS IN MY HOME exhibit at the Royal Ontario Museum is now open until September 29, 2019.

Where to celebrate the Lunar New Year in Toronto

My family and friends are preparing for the upcoming Lunar New Year celebrations. Our New Year’s, that’s based on the […]