The 19th annual Planet in Focus Environmental Film Festival is coming up October 25 to 28, 2018. This film festival explores and tells stories about the world in which we live. Films showcased are meant to inspire, raise awareness and engage public in discussion on a broad range of environmental issues. This year’s schedule includes 23 feature films and 28 shorts by filmmakers around the world. Here are just a few titles on our radar…

Slater Jewell-Kemker is an Ontario filmmaker and the embodiment of “youth unstoppable”: young people who are determined to fight for a future that is clean and green and friendly to the environment. In this, her provocative debut feature, she brings us on a journey documenting the rise of the Global Youth Climate Movement through rallies, international social media exchanges and at major Climate Change Conferences. Passionate and honest, Slater Jewell-Kemker’s autobiographical film shows her development—and those of her committed friends—as they grow as activists and individuals from adolescence to wholly engaged climate change fighters as adults. Along the way, they suffer defeats as the older generation of politicians fight real change even at global conferences but these unstoppable youths are learning from defeats and are more committed than ever. This impressive feature is an urgent call to action from a filmmaker and a generation who don’t want to inherit a deeply wounded planet. 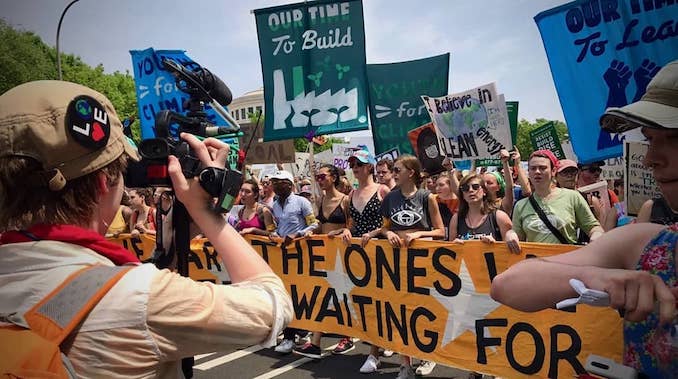 An intensely personal piece, Andrew Nisker’s Ground War is an investigation into the death of the filmmaker’s father. Harold Nisker was a “health nut,” a man who exercised diligently. For decades, Harold played golf every day except for winter: it kept him fit and he loved the game. It was only after his father’s shocking death by cancer that Andrew, an investigative documentarian, began to wonder why the golf course he played in was so uniformly green and manicured. His discovery that one of the chemicals used at the course was part of Agent Orange, the notorious “defoliant” that killed countless Vietnamese during the Vietnam War sets Nisker on a journey that takes him to the original quite weedy and bumpy Scottish golf course, Donald Trump’s Americanized version of it, and a look at what causes cancer. Ground War asks a lot of questions –and many are not answered.

Every year, a new “superfood” or two emerges as the best addition to our search for the healthiest new product to ingest. Whether it’s quinoa from Bolivia or teff from Ethiopia, the appearance of something different is always greeted enthusiastically by the public and the tastemakers who control the alimentary industry. But what happens to the farmers or fishers whose lives and livelihoods have been based on those superfoods? Ann Shin’s emphatic new doc takes us to Bolivia, the Philippines, Ethiopia and northern British Columbia, where the Haida Gwaii dwell, in order to discover what is happening to those places since they’ve been “discovered.” Shin spends time with families in each region finding out the pros and cons of being a part of the successes and failures of globalization in the food industry. Her film looks at fair food practices, sustainability in farming and fishing and the importance of food security.

Liz Marshall’s latest film, Midian Farm, is a highly personal project. She ventures back to the 1970’s when her parents were pioneers in the back-to-the-land social and spiritual movement, in which youth from Toronto left their urban life for a communal one in the country. Few, if any of these young people had experience or understanding of farm life, making their rural lives a fully immersive learning experience. Marshall’s compelling doc reveals that the most challenging task for her parents and the rest of the commune was navigating and creating a new utopian social order. The stress of maintaining a new lifestyle in an unfamiliar environment proved too difficult and in less than a decade, the project and the farm were abandoned. The film’s storytelling relies on former members of Midian Farm sharing their individual perspectives of this communal project. Through their stories, Marshall reconciles some of her earliest childhood memories and their impact on her life.

Working with renowned environmental educator and broadcaster David Suzuki, filmmaker and professor Dr. Ian Mauro focuses on issues faced within British Columbia, which are all too typical of those experienced around the globe. Hosted by Suzuki, the doc begins in the mountains of BC, exploring the effects of record-breaking forest fires, and moves toward the Pacific coast, where the ocean is becoming more acidic. The salmon streams, so important for Indigenous life and culture are being affected by warming waters while pipeline development and oil shipping tanker spills threaten the entire eco-system of northern B.C.. Beyond Climate is a stunning, well-argued plea, which asks viewers to recognize the pressing issues of climate change in our own backyard and begin to adopt an environmentally respectful and low-carbon future, in which humans “move back and give nature a chance.” 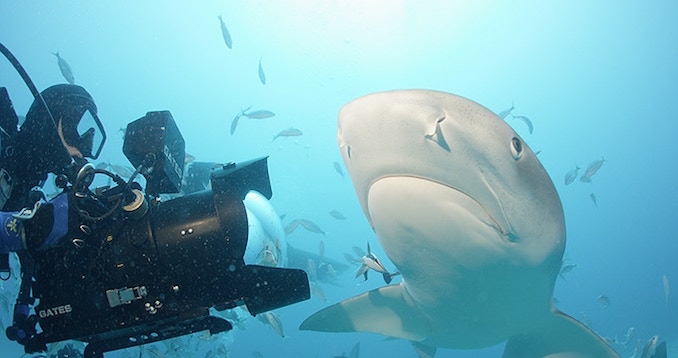 If you missed the premiere at TIFF, here’s another opportunity to see this heartbreaking film. Rob Stewart’s film follows the success of his first film Sharkwater. A recipient of PIF’s 2014 Canadian Eco-Hero Award, and the namesake for Rob Stewart Youth Eco-Hero Award (To be bestowed this year on activist Rachel Parent), Stewart’s final film is a bold and moving testament to the filmmaker’s work as a valiant advocate for the preservation of sharks and the environment. Stewart gives us a look into the underbelly of corruption, encountering politicians and fishers who continue to defy the banning of shark finning around the globe.

For the full Planet in Focus Environmental Film Festival film & event schedule and to buy tickets, visit their website.

There’s a house. There’s art. And there’s some horror. But The Remnant, a new Toronto-set short horror film, could never […]

“A Day in the Life” with local Toronto filmmaker Mars Roberge