The Phantom of the Opera is now playing at the Princess of Wales theatre in downtown Toronto until June 30th. The show stars Quentin Oliver Lee as the Phantom and Eva Tavares who plays Christine. We were at the opening night show and poked around prior to the show to find out some interesting facts and to chat with the phantom himself. 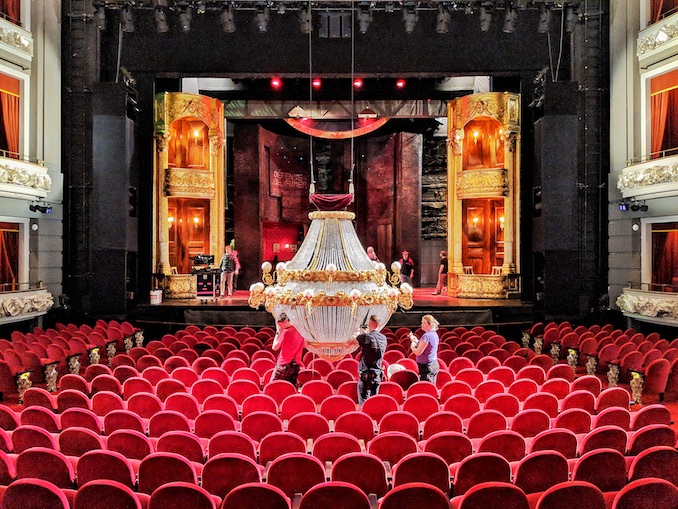 1. The chandelier is very impressive.

One of the most celebrated parts of the phantom is the dropping of the chandelier. This massive structure weighs over 2000 pounds and is fitted with over 30,000 beads. It also use pyrotechnics to make sure it goes out with a bang.

2. It takes 20 semi trucks to transport the show.

The sets were all designed and built in the UK and are being transported around North America in 20 semi-trucks. There is one whole truck just for the wardrobe. It takes 2.5 days to unload and set up the show but only 12 hours to take it down and pack it up.

3. Some of the costumes used in the show are 30 years old.

4. Huge crowds will see the show.

The Princess of Wales Theatre holds 2000 people but the largest show on the tour will be at the Fox Theatres in the United States, some of which hold roughly 4500 people.

5. Quentin Oliver Lee who plays the Phantom is 6’6.

Hailing from Southern California via shows on Broadway, Quentin Oliver Lee plays the phantom opposite Canadian opera singer Eva Tavares who plays Christine. At 6’6, Lee towers over the rest of the cast. We had a chance to talk with him prior to the show.

First I want to ask is what your experience is personally with the Phantom. If you have any memories from before, if you’d gone to see it before when you were younger?

Quentin: I think I saw part of the movie when I was like 12 years old, and I don’t really recall, I mean honest to goodness, I don’t really recall it, but I do know that I saw the opera … the musical, Phantom of the Opera, about three years ago. I saw it with Norm Lewis on Broadway and I was completely taken aback. I didn’t know that a musical could have that much power and there could be that much magic and mystery behind one guy. So it was really exciting since then to get the opportunity to portray the role.

What do you think it is about the Phantom that also has such a wide audience? People that who are not necessarily into opera or into theatre, seem to really love it.

Quentin: I would say there’s a lot of things that have given it the lasting, like the staying power. It’s affected over several million people over the last 30 years, and it’s a great question about why. I’d say the story is one of those love stories that doesn’t matter the generation, it doesn’t matter the time. It’s like Romeo and Juliet in a way. It’s timeless, it’s love, it’s passion, it’s beauty. The sets and the costumes are incredibly beautiful. The music, of course, is beautiful and has that thing that you just remember it when you … I don’t know how many people I’ve heard when I’m leaving the stage, they’re still humming part of the song, Music of the Night or Think of Me. So, there’s a lot of things about it that make it timeless.

Quentin: Yeah, I studied opera. So I’ve been singing since I was little, but I really started studying opera when I was in college, so I want to say 18, 19 years old. I started singing … I wasn’t 100% sure what I was going to do, I wasn’t like one of the guys who knew when they were 12 or five that they were going to be a performer. I didn’t really know, but I did know that I liked singing and I liked music, and always pretty decent at it. So I just kept singing and I started winning things, I was a western regional finalist in the Metropolitan Opera competition, which is pretty big in the States. I decided to move to New York and go to grad school for opera, but then I was fortunate enough to book the tour of Porgy and Bess, which sort of lead me to do more and more musical theatre. I started training more in acting and I was falling in love with the craft of acting.

For this production here, tell us a little bit about how you found out about it. How did the try outs, how did that whole process go? When you found out, what was it like?

Quentin: It’s kind of a funny story. The first time I tried out I think it was right after the Porgy tour ended, maybe like a couple of months right in the very beginning of this tour, and I did not do well. I didn’t get a call back, I wasn’t called back. I started working more on my craft and did a few other productions, and I was fortunate enough to work with Hal Prince, who directed the original production and with his stage manager, and with some other music directors who worked on the project for a long period of time, and I was fortunate to work with Hal Prince on his musical, The Prince of Broadway. I got a chance to sing Music of the Night on Broadway as a part of his musical, Prince of Broadway, which is really, really thrilling. So it set me up for the next round of auditions for The Phantom of the Opera tour.

It was nice to go back and to see some familiar faces and this time do much, much better and to get a call back and you know, it’s actually kind of funny, this theatre here in Toronto, The Princess of Wales Theatre, is really similar to Her Majesty’s Theatre in London, where the original production plays. My final audition was in front of just like three people, it was Cameron Mackintosh, Laurence Connor, the director and the music director of the London production, and the house was just as intimate. So there’s just these three guys, but it was still a really intimate experience and it’s really fun to be back here in Toronto and have that feeling of the first time of my first audition, or my first triumphant audition. 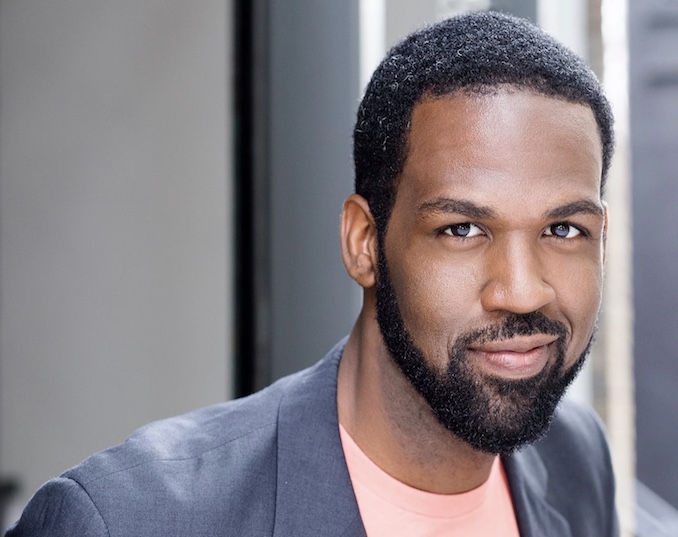 Quentin: That’s a great question. I think the Phantom is a very … First of all in this production especially, he’s supposed to be a human, just a person as opposed to a mythical magician or anything like that. He’s a very smart person who has to deal with a lot of problems because of the way he looks. I have dealt with a lot of problems because of the way that I look, and I can pretty easily relate to that, not to the extent that he does, the Phantom that is. Also, the way that the Phantom deals with problems, it’s very logical and I want to say that, he really believes in 100% that what he is doing is right and fair and just, and the best for everybody and I’d like to connect to that, trying to show Christine this beautiful music of the night or this beautiful different way of thinking. I like to try and do that in my own personal life, but it’s difficult to do. So it’s fun for me to have that challenge every night on stage.

Also, I think that some of the other difficult parts of the Phantom is that he kills people. You know, when he abducts … So, some of the things are a little less socially acceptable, and the thing is –

Exactly! Exactly! So that sort of, it can be a little more difficult to make the justification in my mind as in hopefully socially normal-ish person, to do some of the socially less acceptable things. There’s a really powerful scene at the very beginning of act two, as a matter of fact, when the Phantom comes in and everybody’s quiet and he says, “Why are you quiet?” You know, I mean why did you stop talking intentionally? You know, I think it’s that kind of humour that I like to relate to that can sometimes be difficult to do perfectly.

Do you have much experience in Toronto? Have you been able to explore at all?

Quentin: I’ve explored a little bit. This is my very first time, and it’s thrilling. I’ve spent a lot of time in New York and I would consider this a more green, more pretty, less dirty version of New York, with a lot nicer people and I love New York. So I really, really enjoy Toronto! I’m excited to see some of the other things. I got a chance to see the CN Tower on Tuesday, I think, that was fun. There’s a lot of places to eat that I’m excited to try. There’s a lot of murals and sculptures and just shops that I’m excited to see.

Are you going to see any other productions maybe while you’re here?

Quentin: As a matter of fact, I am. Now I can’t say which and when, but I am gonna see one different production, and I’m excited to see it.

So thanks for taking time to talk to me. Is there anything else you wanted to share about your experience or anything you want to say something unique maybe to our readers that they might find interesting?

Quentin: I’m really glad about Toronto and the audience and their appreciation for the art, and their support and their cheers, and their love of theatre and music. I know that this, we’re doing really well as far as being sold here in Toronto, and that’s great, and that just goes to show how powerful the Toronto audience is, and I just want to express my appreciation for that, because it makes a big difference for us performers when we’re on stage and we have an appreciative, receptive crowd. So thank you guys for being there!

All right, sweet. Thanks so much man.

The Phantom has Returned and he’s Darker than Ever