Picnic in the Cemetery may sound disturbing to some, but to others it’s a place of serenity. Canadian Stage presents the North American Premiere of Picnic in the Cemetery (April 26 to May 6) – a moving music and art production created by composer Njo Kong Kie. This is his first production in his Berkeley Street residency at Canadian Stage. Following his critically acclaimed run of Mr. Shi and His Lover (co-created with playwright Wong Teng Chi), this new piece introduces Macau-based Folga Gaang Project in their Toronto debut.  The concert-theatre piece features original compositions for violin, cello and piano.

The music in Picnic in the Cemetery was first published as an album, which was inspired by Kong Kie’s personal time visiting, and picnicking, at Toronto’s Mount Pleasant Cemetery. He lived nearby and found the setting allowed him space to breathe and step away from the hustle and bustle of the city. While he was touring with Montreal’s La La La Human Steps, he wrote short pieces and the collection became Picnic in the Cemetery. 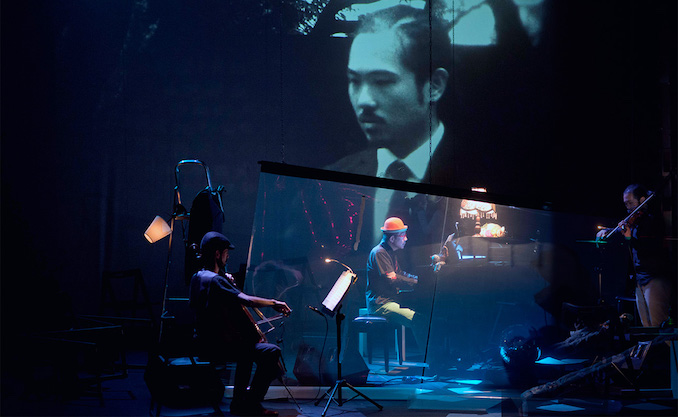 Mount Pleasant Cemetery has been a favourite place for locals and even tourists to gather for some solitude and reflection. Tell us, do you have any favourite locations within the grounds?

I have been going to Mount Pleasant for some time, but tend to always enter from the Yonge Street entrance and am thus more familiar with the grounds closer to that exit. Among my favourites are the ornate iron benches built around tree trunks where one can sit down and enjoy a cup of tea; and the large sculptures with sitting areas built right into the design (seems like an invitation for passersby to sit down, don’t you think?). I like the area located just to the north of the entrance, as the road veers towards the east. There are elegant Japanese maples there and the cherry blossoms in the spring are so beautiful. And I have always been very intrigued by the couple of sarcophagi further up the hill dedicated to Gregory Munt and Kenneth Meacham. The inscription on the sculpture between the two tombs suggests a loving relationship between the two, but I could not find much information about their lives even with Google. I pass by there every time I visit the cemetery.

You must have witnessed some unforgettable moments while you’ve visited. Any stories that you’d like to share that have inspired any of your music?

Being a musician, my most vivid memory of my visits there naturally consist of music. I once listened to a bagpiper serenade the departed for about half an hour, just a lone piper in the middle of the cemetery, standing not in front of a particular grave, but rather amongst a group of graves. I have never heard bagpipe music played so mournfully. And the other day, I was startled by four people coming out of a limousine just behind me while I was observing a big mausoleum in front, and judging from the darkened windows and the way the passengers were dressed (black suits and all), my mind went straight to imagining the family of a mafia boss coming to pay their respects; but these very stylishly dressed folks turned out to be fashionistas out for a photo shoot.

The music has a range of sadness but also love, enduring moments, and even joy — that’s what I’m sensing when I’m listening. Was this journey of life an intention of yours through your music?

I am so happy that you hear all of those moments in the music. On life’s journey, we do feel all those emotions – love, joy and the hope for some eternal existence, don’t we? But visits to cemeteries do naturally remind us of the impermanence of our lives. To be honest, the title came about only when I was putting the album together. The songs were already written. I am not sure if the title came to me because of the emotion inherent in the songs, or just that I was going to the cemetery so often the title just popped into my head, but somehow they work for this collections of songs in the show.

Cemeteries seem to bring you peace. Describe the feeling you get when you picnic there?

In a way, cemeteries are built for the living – for us to try to deal with life’s greatest mystery. So it makes sense that we should spend some time there. At Mount Pleasant, you see people walking about, jogging, running, even on bikes, doing day-to-day stuff, but you also see people mourning the departed, and the tombs of course remind you of all the people who have gone before you. It just puts things in perspective, and one becomes more contemplative and with that, gains a sense of peace I suppose. Not all cemeteries are built like parks of course, so the experience can vary. We are privileged to have a place like the Mount Pleasant in our city, but no matter where I visit, cemeteries always bring into sharp focus about how short and precious our lifetime is.

Tell us more about the Chinese tradition of picnicking in the cemetery?

Several times a year, it is customary for Chinese people to visit their ancestors’ graves – to sweep them clean and to offer food and drinks, flowers, fake money, paper replicas of clothing, cars and even houses to their ancestors. Well, the living can’t do much with the fake money, but the food we can eat. So typically, after our ancestors are fed, we partake in the food (so always bring your favourite food). Some families can have very elaborate picnics in the cemetery, complete with roast pigs and all.

Can you tell us more about the names of the songs you’ve composed? They are all so beautiful.

Thank you for the compliments. Do you mean the names or the songs? I will take either, haha.

Okay, lol yes to both?

To answer your question: Many of these songs were composed during a time when I toured with the dance company La La La Human Steps. I wrote them to amuse my two string player colleagues and myself while on the road, so a lot of the song titles have to do with our memories, or some inside joke. Formula 1 for example, despite its high octane energy, refers simply to a formula of writing music rather than the car race; Ljubljana is named after a city we had toured to together; Les Escaliers, Parle-Moi and Toujours all have French titles because my colleagues are francophone, but they also describe the music – Parle Moi is a duet between the two string players; Toujours has this long slow developing melody and harmony which to me suggests infinity; and I want to include Toronto in some ways, thus When Wellesley Weeps references the street name, but not the actual historical person after which the street is named. And then there are a series of Moments Cinematiques – a nod to Franz Schubert Moments Musicaux.

Picnic in the Cemetery will be on stage at the Berkeley Street Upstairs Theatre (26 Berkeley Street) from April 26 to May 6. Tickets from $39 to $69. Performance runs approximately 75 minutes with no intermission. For details visit www.canadianstage.com

I learned about Robert Lepage at university when I was studying divised theatre.  It’s been almost seven years since I […]

Chimerica is a Journey you Want to Go On

I was living in London, U.K when Chimerica premiered at the Almeida and essentially whipped up the city into a […]

Domesticated: Battle of the Sexes

The battle of the sexes is a theme that is continually re-enacted time and again, yet when they are performed […]