The Windsor Arms Hotel in the Yorkville area of Toronto remains as one of the most iconic buildings in the city. Nestled just steps from the shiny high end boutiques of the area, this 28 suite hotel and designated Heritage Toronto site, has been a solid fixture in the area since 1927 that followed the architectural movement of the time. You can still feel the weight of the building and its presence is undeniably posh.

Like other hotels in the city, it’s inevitable that a refresh is needed every so often but when we heard that the Windsor Arms was going through a transformation, we secretly hoped that it wouldn’t completely take away that regal, yet comforting feel, it’s known to have. Don’t get me wrong, it’s not stuffy or pretentious, it just has that graceful presence that doesn’t scream “I’m here!”…nor does it need to. Having said that, the hotel does have it’s fair share of celebrity spots and big splashy parties. From Joe Carter’s legendary charity golf after parties to exclusive and highly coveted TIFF parties and just last summer I walked past the front entrance where Drake was casually standing in the sunshine with his posse waiting for his ride. I nearly gave myself whiplash when I had swiftly turned to take a second look and I thought how great it was that he could just be himself here.

The Windsor Arms Hotel (18 St. Thomas Street) is currently, and quietly, transforming thanks to the vision of owner George Friedmann and design firm of Dinel Design led by Jacque Dinel’s masterful eye. Friedmann acquired the Windsor Arms site in 1995 — the previous owner of the building had it shuttered in 1991. Friedmann  realized that Toronto was the only large city in North America that didn’t have a small luxury hotel. So, this opportunity came up to revive a piece of Toronto’s history. 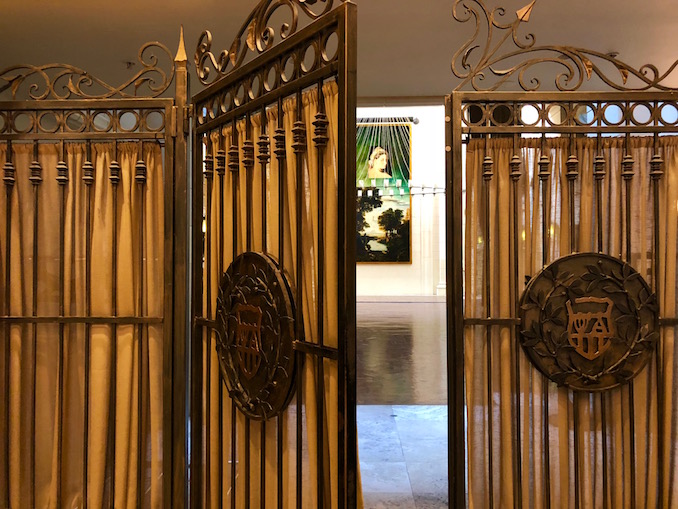 Dinel himself is an incredibly fascinating man with a passion for the tiniest of details. What a treat it was to have the opportunity to walk through the corridors of the hotel to learn about  a few of the changes.

As Dinel led this tour through he reminded me of the rich history of the landmark hotel and residence. “The first incarnation here was a courtyard where you find the lobby today,” he mentioned as he pointed to the ceiling where once was a massive skylight. “When we started working on the redesign we did it area by area and we questioned whether we should go more contemporary? But then we thought, No! Let’s make it more like the Windsor Arms!” he exclaimed with a brilliant smile. We knew exactly what he meant. The hotel has a certain “old world charm” and he’s definitely found ways to balance tradition with modernity. 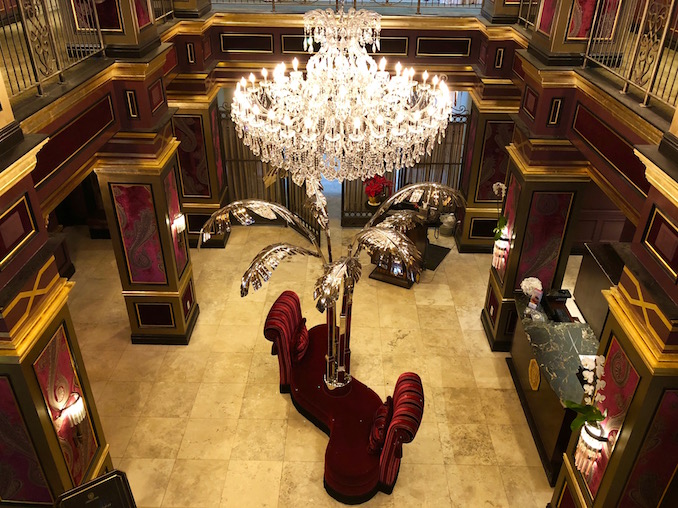 The lobby is always what sets the tone of any hotel. As soon as you step inside, it’s the striking golden palm tree by artist Bruno Billio that takes your breath away. It’s what Dinel calls “the postcard picture” lobby as I indeed snap many different angles during my visit.

‘The original neo-gothic style of Windsor Arms was actually built when the University of Toronto were considered architectural marvels of the time. Gothic structures dotted the University grounds in the area which, over time, saw the area transform to what is known today as the luxurious shopping designation, “The Mink Mile.” Everyone involved in the hotel’s transformation agreed that there was a desire to have the feeling of grace and comfort in the interior design, but they still wanted to infuse art, technology and design forms of today.

The main floor ballroom has been used for years as an event space and restaurant. As I visited it earlier this year, they were just getting ready to move onto the renovations there. Dinel explained that the large pillars will remain intact. “I like them just the way they are. They are copper and I’d like to leave them to age. A few years ago they were polished but this to me has a lot more character.” And if the walls could talk! This space has had more than its fair share of celebrities and A-listers. Private booths were coveted spots to see and be seen. 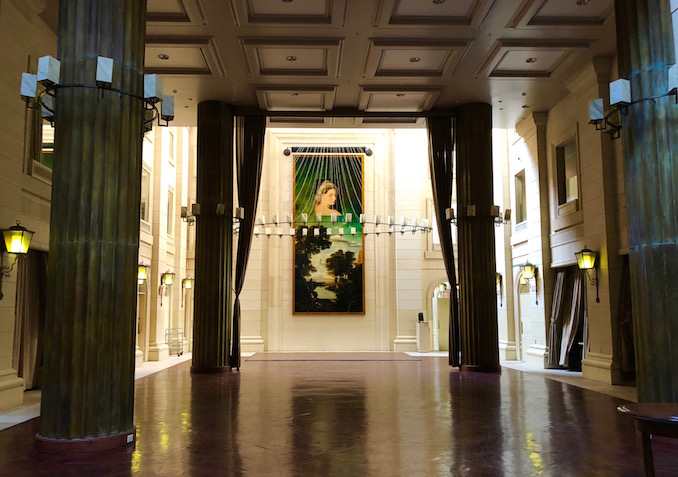 The hotel is famous for its Afternoon Tea service where often three rooms are fully active with diners. We were curious about the collection of colourful hats on a tall rack at the entrance way. Were they for purchase? Turns out that the hat display has been a long standing tradition where guests, for a donation to charity, can select a hat to wear during their Tea Service.

In the main Tea Room painted in a deep, rich Midnight Purple, Dinel pointed out the large fireplace mantel. It was part of the original Windsor Arms from the 1920s and it still actively keeps the room cozy to this day. Across the lobby are two salons often booked for private parties. One room is quite obvious but the other is a tucked away cosier room that is often booked for private and smaller dinner parties. Discreet and hidden, it’s an ideal spot for celebrities to be away from craning necks and camera lenses. As the walls beckons me to run my hands across the surface, Dinel smiles and explains how he makes the most out of the spaces, “Everything is tactile and important in this environment. The look, feel, smell, sound — I like all the senses working together.” 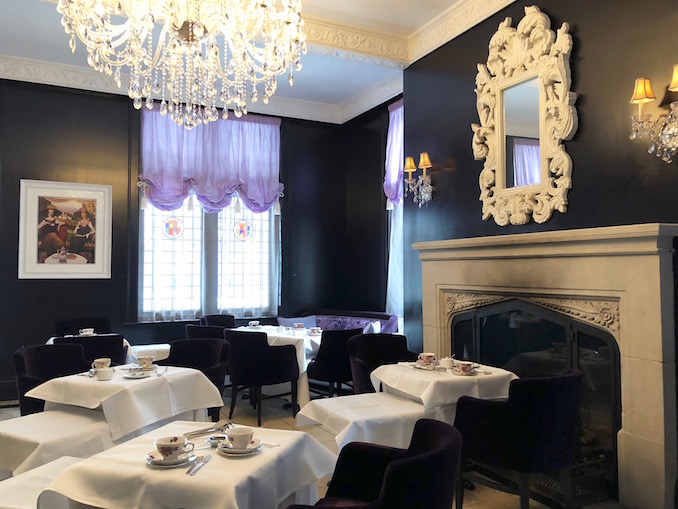 The Bar is now what the hotel refers to as “The Living Room” with the look and feel of a relaxed yet luxurious space. The image of a comfortable parlour in Windsor Castle comes to mind with plush velvets and soft leather in rich colours. Dinel tells me that it was the Friedmann’s daughter who suggested a bar area where people can feel at ease and even order dinner sitting at one of the sofas if preferred. A home away from home feeling. Noticed was the artwork on the walls. They are original 19th century artwork of British Noblemen — fashion plates that were sent over from London. Dinel tells me his favourite time to visit is at night when the room really is the most dramatic. 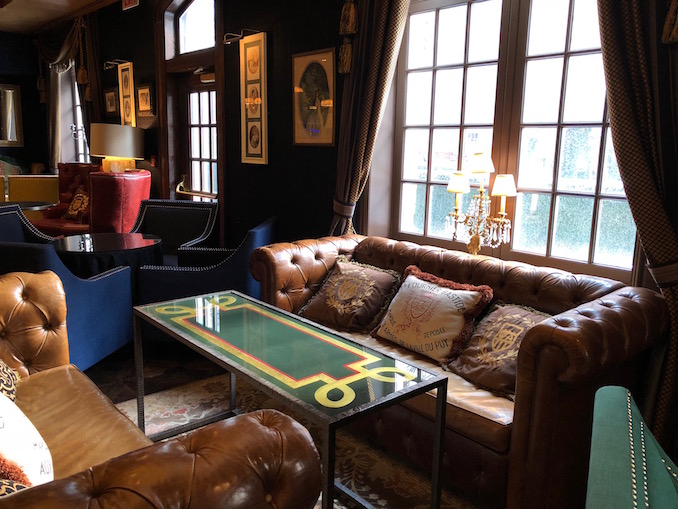 Speaking of artwork, there are different themes in the hotel worth checking out. Another private dining room (aka the Kosher dining room) situated at the back of the bar area hosts a selection of original artwork by world-renowned contemporary Canadian artist, Charlie Pachter. 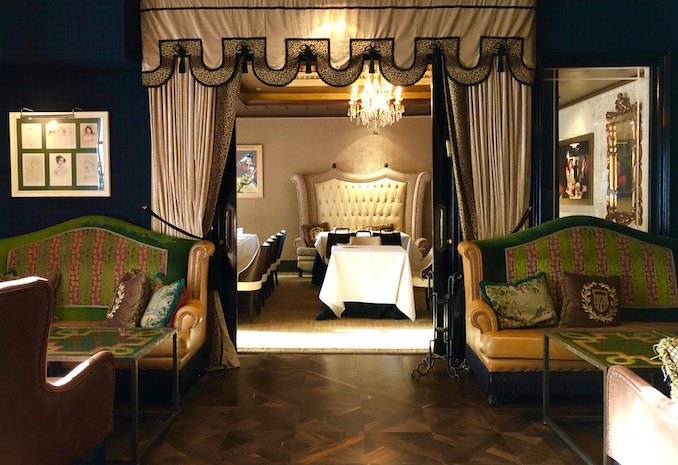 On the second level corridors you’ll find artwork from international artists that are exhibited and will change every so often. When we visited it was the works of Mr. Brainwash and Ben Frost on the walls.

The two meeting rooms on the second level have also gone through a refresh recently. Fun fact, one of the rooms is the set location and doubles as the British Embassy on the hit show Designated Survivor.

The suites themselves have some recent additions that feature musical instruments including baby grand piano, harp and guitars. How’s that for amenities? Also, the Spa has transformed since the last time I was there. We’ll save that visit for another day.

Does the redesign also consider “social media” worthy photo opps? For Dinel every nook and cranny, wall, light fixture, rug, curtain panel, artwork is selected to pull a complete look. It’s inevitable that a stunning space will draw the social media shares but we get the sense it’s not the driving factor here. Windsor Arms is just not just photo worthy but an iconic landmark in Toronto’s history.

Thank you to Jacque Dinel and Windsor Arms Hotel for the tour of yesterday and today.

Jane Fonda Gets Candid and Comedic in Toronto for TIFF

Jane Fonda didn’t start working out until she was in her 40s, calls yoga pants her favourite fashion staple, channels […]