The Chance Of A Lifetime! 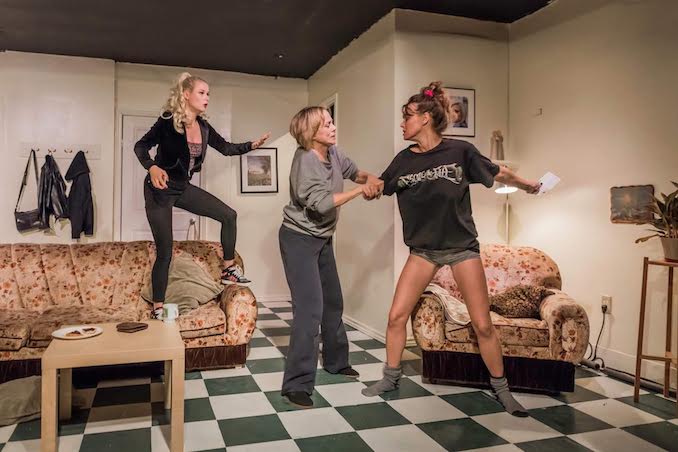 The Chance is a fantastically funny farce in which three women discover, by chance, a wallet with something inside that could change their lives forever. As the mother, Reid is faced with a chance to turn her desperate life around and help her daughter and her friend, but at some risk. Despite the creepy men, threat of jail, getting on the bad side of the mob and stress eating, this all-female cast has dreams. And they’re fed up with thugs, ex-boyfriends and collection agents.

“These women inspire me,” Fiona Reid said. “And I’ve always wanted to be in a George F. Walker play.”

The dialogue is extremely funny in The Chance. From the mother and daughter slinging quips at each other like arrows, to insensible rationalizations about loan sharks and debt: “How much interest you owe depends on what time it is.” If you are used to a darker George F. Walker, then The Chance will be a refreshing surprise!

Don’t you want to find out what was in the wallet?

It’s wonderful to see Fiona Reid, more commonly seen at the Shaw and Stratford Shakespeare Festivals, on stage at the new Assembly Theatre in Parkdale. On opening night of The Chance Reid kills it with a scrappy performance and her zingy one-liners. Apparently playwright George F. Walker geared dialogue specifically for Reid in this lead role. Based on the non-stop riotous laughter opening night, it’s clear why she was drawn to this new play. You could tell from Reid’s effusive performance she was having a fabulous time on stage.

The role of Reid’s vagabond daughter is played by Claire Burns (who reminds us of a younger Catherine O’Hara). Burns plays Jo – the unexpected voice of reason in the play, considering her background of stripping, kidnapping and drug and alcohol abuse. Burns is magnetic; it’s impressive how fast and seamlessly she can switch from petulant to passionate in her role.

All three actors work wonderfully with each other – there’s a solid balance between the three women, as the plot ping-pongs faster and faster towards its climax. Reid, Burns and Leeuwen all get so many hilarious one-liners. Go see this show if you love laughing your face off!

The Chance runs until October 28, 2017 at The Assembly Theatre, 1479 Queen Street West, from Tuesday to Saturday at 8:00 pm. The show is approximately 70 minutes with no intermission. Tickets are $20.00 – limited PWYC tickets available on Wednesday performances. This is a Leroy Street Theatre production.

To purchase tickets visit: https://www.brownpapertickets.com/event/3085166 or at door.

Assembly Theatre in Parkdale is the new home for both Unit 102 and Leroy Street Theatre.

With this world premiere of The Chance, Walker is once again partnered with long-time

‘The Audience’ Offers a Glimpse of the Queen behind Closed Doors

I had only recently learned about Queen Elizabeth II’s weekly meetings with Britain’s Prime Ministers, a tradition of the Monarchy […]