A Day in the Life of a High Rise Window Glazier

Have you ever wondered who fixes the windows in Toronto’s tallest office towers? Who can stomach the steep drop as they balance and wiggle the glass frames into locking channels hundreds of feet above the sidewalk? Last week I found myself hanging out with them.

Like most residential and commercial window glass companies, Thermo-Bilt Windows and Doors window replacement service will tackle just about any glass window repair and replacement job below six stories, or what they can safely reach with a lift truck or scaffolding. But if the glass panes that need replacing are more than one hundred and twenty feet off the ground, the maximum reach of the biggest telescoping boom truck, then they’ll need to subcontract more professional help.

But what daredevil is willing to risk his or her life replacing windows in the sky?

Meet Chris Chandler, adventurer, risk taker and professional glazier; this guy is a high-rise emergency first-responder for cracked or broken windows, or anything that could fall onto peoples’ heads.

The 34 year old aerial rigger is absolutely covered in carabiners because every one of his tools is on a safety leash.  In the decade he’s spent working in this discipline he’s never dropped anything, “But I know guys who have’,  Chris shook his head in a negative reaction to the memory. While we walked to the roof door he went on to explain his own liabilities under Ontario personal injury law, and the strengths and weaknesses of each maintenance company’s collective bargaining agreement. Suddenly we were on the roof, and I couldn’t comprehend anything beyond the gimpy little red harness Chris handed me at the base of the swing stage.

Chris is the point-man on a leading crises team; he specializes in emergency window pane replacement in high rise office buildings and condo towers. On Thursday the 23rd of March 2017, I went up with him on a service call. You can see me in the reflection in the window in the photo above.

The windows in most modern office towers are composed of multiple panes of glass stuck together with Polyvinyl butyral. The panes or ‘lights’ as they’re called also sandwich a vacuum interior filled with Argon. These units are double-glazed, an industry term denoting insulated glass units (IGUs) which are manufactured with glass in range of thickness from 3 to 10 mm (1/8″ to 3/8″).  At that width the glass is extremely strong and shatterproof. In most bank towers the first thirty floors are also blast proof. But what few people know is that all these windows are perishable; Argon gas will eventually leak out, and each unit will inevitably ‘fail’.  The glass windows on every office tower in Toronto have a shelf life of about twenty years each. “There are over 3700 windows in this building alone,” Chris smiled, “and its our job to check their health regularly, and replace them as necessary”. 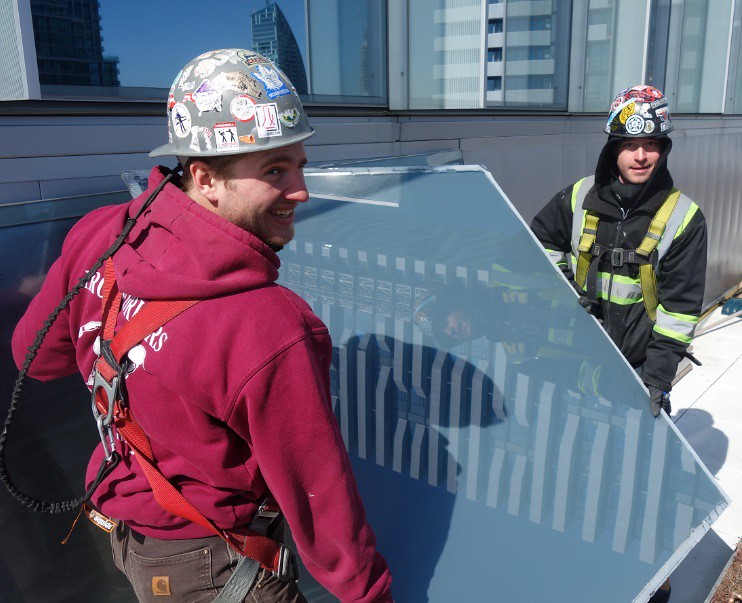 When I strapped into the creaky metal swing stage, I willingly entered the world of the glaziers and soon found myself clinging to the glass exterior of a LEED Certified building, forty stories above hard concrete sidewalks below. A flock of seagulls flew by below me and that otherwise tranquil scene really freaked me out. 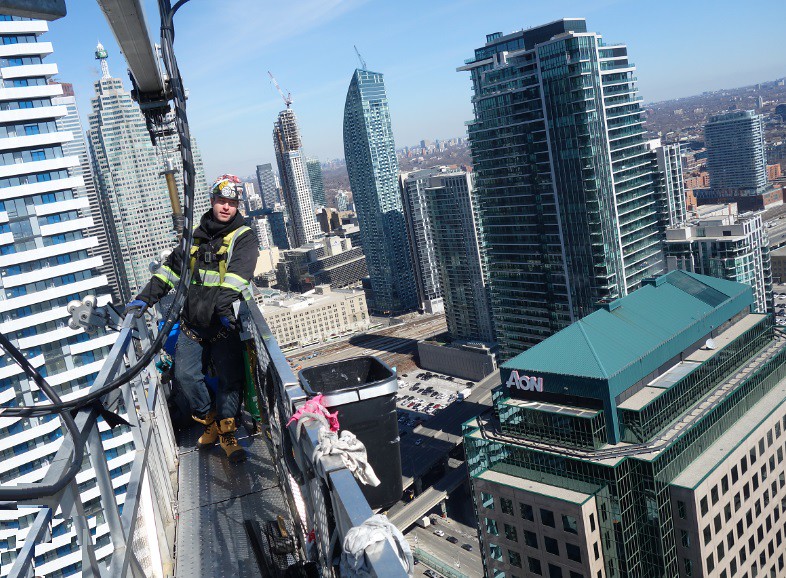 On that crisp March morning, Chris’s mission was to caulk a window near the top of the building where the weather bead had come loose and fallen off over the winter. The tenants inside were complaining they could hear the wind whistling and on cold days they could even feel a draft near this window.

“Corner office windows need the most attention, especially on the south west corner.” According to Chris, this happens because, “…the wind mostly comes from the west, so the windows on the south west take the brunt of the storms coming in off the lake”. The west windows of every building in the city will generally have the most maintenance calls. The west gets baked in afternoon sun while, “…there’s a lower percentage of failed units on the east side where its cool in the morning and there’s less wind.”

As Chris worked the caulking gun he explained how this particular corner window was recently replaced, and not due to any weather damage, but because the unit had an obvious nickel sulfide inclusion (more on this later). When the window was replaced, some of the fresh caulking had come away and exposed a narrow 16th of an inch gap in the exterior surface of the building.

Static pressure inside the building envelope, with elevators moving up and down, and people walking about opening and closing doors will actively draw water into the building. In these situations water can travel and manifest as a leak some distance away from the hole. Water from such gaps in the exterior has been known to ride interior air currents and have maintenance workers looking for a leak one story up and two offices over from where the breach actually exists. This gap was quenched with DOW 791 weatherproof caulking, and the whole job took less than 30 seconds to complete.

Nickel Sulfide is a gaseous bi-product of the float glass making process. One of the failings of modern ‘float glass’ is a weakness known as nickel sulfide inclusions (NSI), and its estimated that one in every five hundred panes of glass made by the float glass manufacturing process contains this near-invisible chemical weakness that will, over time, break the unit.

The butterfly-shaped bubbles and cracks of imperfect glass is just one of a half dozen potential hazards that Chris and the rest of the glaziers are trained to spot when they do maintenance work on the exterior of a building.  Only trained professionals can find small NSI flaws in the glass panels when they’re new, but as they age the bubbles grow in size and eventually it’ll be possible for everyone to see the cracks in the window without any special instruments. 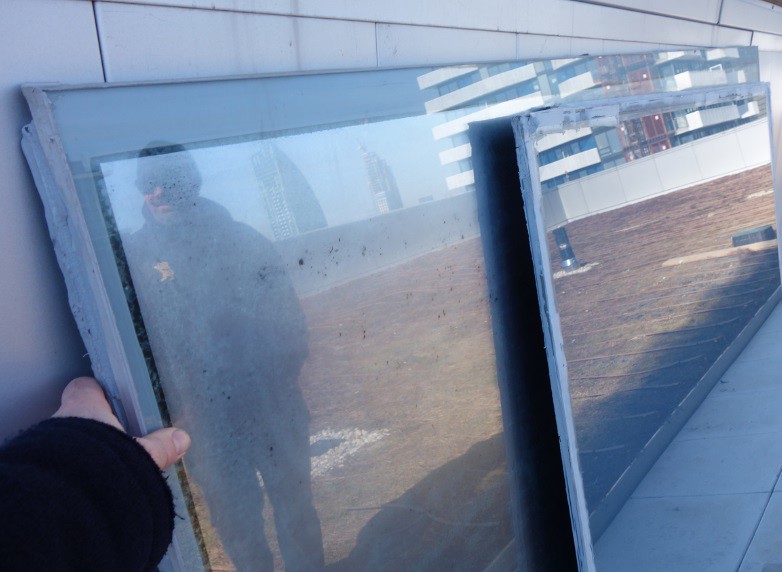 Another task on Chris’s list was to tighten the sex bolts holding the vertical sun shades into place.

I said pardon me? A sex bolt, also known as a barrel nut and or barrel bolt and sometimes called a Chicago screw is a type of fastener with a barrel-shaped flange and internally threaded protruding boss. It’s used when the screws have to hold great weight. This boss sits within the components being fastened, and the flange provides the bearing surface.  In this case these heavy fasteners were being using to hold  vertical and horizontal glass fins which function as sun shades to keep the hot afternoon sun from heating up the building. As these bolts heat up during the day and then freeze at night they can overtime can work themselves loose, and its Chris’s job to keep an eye on these fins and tighten the bolts as necessary.

Today Chris is a genuinely happy young man, but working at great heights can over time play havoc with even the healthiest minds; a Somatoform Disorder can happen when the human brain is constantly suppressing fear. The symptoms of this mental condition are very physical. The mental illness manifests itself in glaziers’ bodies as fibromyalgia, chronic fatigue, motility disorders of the esophagus, nonulcer dyspepsia, irritable bowel syndrome, urethral syndrome, and ‘false pain’ syndrome.

To prevent this from happening too early in his life Chris only works four days a week and tries to have as much fun as possible on the ground in his three days off.