The first time I ate bugs was an accident. I was travelling in Isla Mujeres and hungry for breakfast and stopped into a quaint open cafe with ridiculously cheap meal offerings. I had met some other travellers and we all sat together. A basket of toast came to the table and while we were busy chatting something crawled up my arm. I shoo’d it away and didn’t give much thought. I continued to crunch on the warm toasted bread and a few more ants crawled on me. It was the tropics I thought to myself. There are bugs. No big deal. But then I noticed specks of black on my toast. Baked in, unintentionally were ants. Needless to say we all jumped and ordered cervezas to calm our nerves and hoped that the alcohol would somehow make things okay. 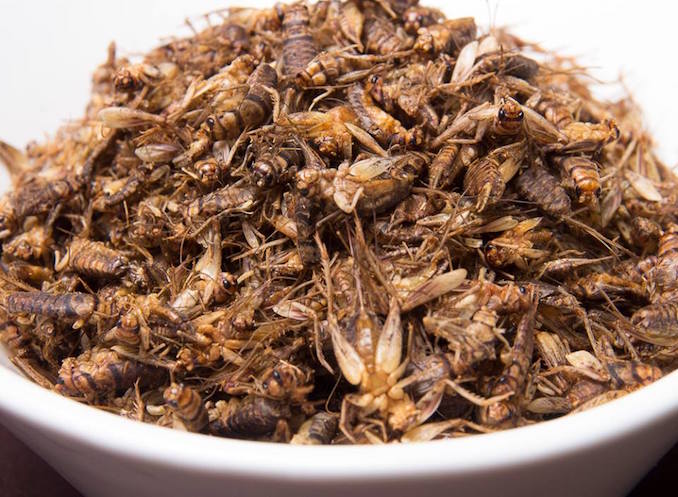 We survived and reasoned with ourselves. After all, we knew that many parts of the world eat bugs. We joked around about the high protein content without any real scientific knowledge at that time. Nonetheless, it made for a a great travel story at that time.

But funny how something like eating bugs is often associated to impoverished parts of the world. My mind adjusted THAT thinking after watching a documentary called Ants on Shrimp that was based on Two-Michelin Starred restaurant chef Rene Redzepi’s (Noma, Copenhagen) move to Japan to open up a pop-up restaurant. His insects, foraged in nature, were included on his menu to high end paying patrons. 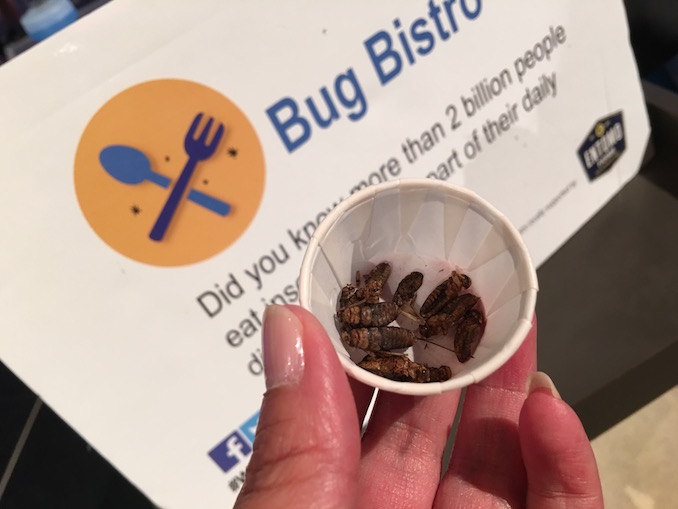 Then, this past summer, the thought of eating bugs started getting more mainstream attention when the Ontario Science Centre hosted a Bug Bistro as part of their Ripley’s Believe It Or Not Exhibition. Curious families visited to get a taste…or at least a look at roasted crickets and bbq’d mealworms. Visitors were educated on the growing interest of insect used in diets.

So, why should we eat insects? According to a study titled “Edible insects: Future prospects for food and feed security”, by 2050 the world’s population will reach 9 billion people. That means, the current food production will need to almost double. The food industry is racing to find sustainable options. While consuming insects have been a part normal diets of many cultures around the world we’re only just beginning to take notice here in Canada.

Entomo Farms are producers located just outside of the city and we had discovered that they are actually the only farm in North America that breeds, raises and process insects for human consumption. Founded in 2013 (formerly Next Millennium Farms) by three brothers who’ve taken their family passion in education and awareness of the health and environmental benefits of insects to the next level and they’re gaining lots of attention. We are finding their products sold at specialty food retailers including Organic Garage, Planet Organic, Nature’s Emporium, Summerhill Market and McEwan’s in Toronto. The entire line is available on their website. 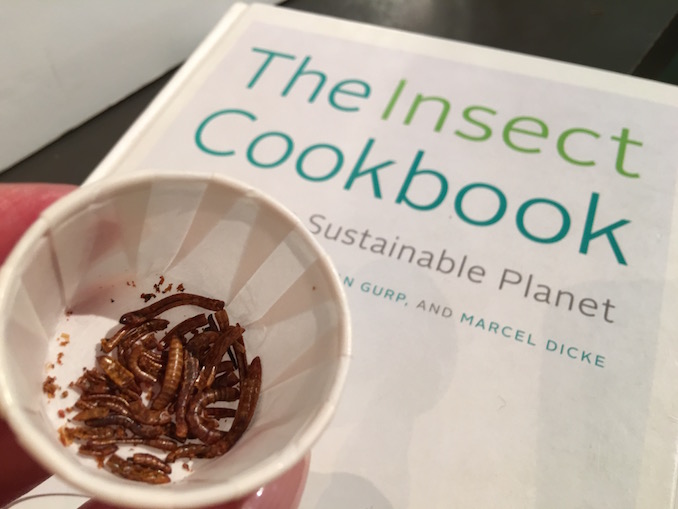 We had a chance to speak with Stacie Goldin, the company’s spokesperson to find out more. Stacie helps us learn more about the human health benefits and global environmental benefits of eating insects.

Is it a powder or a flour?

Actually we don’t call it flour but it’s a powder because it doesn’t really act like flour. When people hear flour they expect it to have certain properties. You wouldn’t do a one to one conversion with cricket powder. How you would use it is that you would take out 10 percent of your dry ingredient in your, say, cookie recipe and replace it with the cricket powder.

Is it considered a good source of protein?

Yes, cricket powder is a great source of protein however it also has other great nutrients. But when it comes to protein, cricket powder has almost three times more than beef. It is also very high in calcium, iron, and the B12 levels are off the charts — almost 7  times more than beef. It also has 9 essential amino acids and it has the perfect Omega 3 to 6 ratio. Crickets are also very high in pre-biotic fibre. So, in the future you’ll be hearing more about prebiotics as there’s a lot of research going on right now.

We often hear about probiotics and how they are needed to keep our gut healthy. However, the probiotic needs to feed on prebiotics exist but hard to find in their natural state. Probiotics are found in strange foods for example you can get prebiotic fibre in raw asparagus and raw Jerusalem artichokes. But it may not be enjoyable to gnaw on these raw foods. Prebiotics have also been found in the exoskeleton of crickets and mealworms. While we’re learning more about the healthy gut, we’re also learning more about that relation to mental health. So, researchers are now looking at how your gut feeds your mind which affects mental health issues like dementia, depression, ADD and more. I’ve written a blog about gut biome health on our site.

How did you first find interest in insect as food?

Before I started in this no one in my family was interested. I was actually a vegetarian for about 18 years. I was vegan for almost 3 years before that and then when I was pregnant with my youngest I was diagnosed with Pika – a nutrient deficiency. I was so low in iron and B12. I was having  ridiculous dreams about drinking gravy and eating chicken wings when I was pregnant. I was also having fatigue and dizziness issues and I thought I was just tired and pregnant. The doctor had sent me for tests and told me that I needed to start having injections if I didn’t start having some sort of meat protein. So I had to start eating meat but I wish I had known about insects because I would have done that first before going back to beef and chicken. I had more ethical reasons for staying away from those foods. But now that we’ve learned more about insects I cook with it more and bake with it more now. Even when we have people over I’ll put out bowls of roasted crickets and mealworms to put on their salads.

Okay, so speaking of eating insects, what kind of dishes should we start with? Ease us in.

When we had the pop-up bistro at the Science Centre we had three different samples for people to try that included chocolate chip bite-size cookies made with cricket powder. We really wanted to show how you could use cricket powder in anything. We also simply had salsa and added the powder for a simple way to serve without baking or cooking.

Is there a flavour to it?

It really depends on how your palate reacts. My personal experience, and based on other people’s experience, it depends on how much cricket powder you’re adding in. You really won’t taste anything however it does have a flavour. The cricket powder is a little earthy tasting and a bit mushroomy. But with the chocolate chip cookies you don’t taste it because the cookie recipe developed by our Entomo Chef balances the flavours.

Is it a food trend?

Well, I want it to be kind of like when quinoa first came to our attention. Everyone was like “Keen-what?” but now we’re seeing it, and not so many years later, in everything. We want to be the quinoa that people just think “hasn’t it always been here?” or like sushi, it’s everywhere. We talk about the sustainability and future of insects and it’s a seller upon itself, right? We  educate people that it uses way less feed, less water and less land to produce the food and so plentiful…but it’s also nutritious and tasty. There are over 2000 edible species of insects so it has to become more mainstream here.

Where do you source your insects?

We farm them here in Ontario and all our research, efficiencies and resources are here. The farms are furnished out of old abandoned farms so it wasn’t like we had to create something from scratch by using existing structures. There are different rooms for the various stages of maturation on the insects. The adult room is the loudest as you can imagine as crickets only chirp at the end of their life cycle. Crickets have a 6 to 8 week lifecycle. Darrin has created a free-range system we call “condos” so the insects can hop in and hop out with feeding stations so they can eat what they want. We are working with a local organic feed company for what we feed to the insects. Also, they aren’t harvested until  the end of their life cycle. There are no chemicals involved and they are not “processed”. At any given moment there are about 100 million crickets on the farm and we source out to over 60 food companies worldwide that include the ingredient in their foods for human consumption.

It’s an ingredient that’s included on purpose. When we were first starting, there were so many conversations about how foods were being called something different. Think about escargot. We know it’s snails but because its got a fancy name, it’s acceptable. So do we need to come up with fancy names so people don’t know they are eating insects? We disagreed with that thought. We want people to understand why they would eat insects and we want them to make the choice for specific reasons. We want people to know that insects will never be hidden or sneaked into food. It has to be listed as an ingredient.

You’ve been seen at the Royal Agricultural Winter Fair and the Ontario Science Centre and other events. We’ve seen Entomo Farms on television on many interviews. What else is coming up?

Stay tuned for news with Winterlicious.

Things To Do While Staying Warm this Winter in Toronto

Okay, if you’re not embracing the winter months especially after the festive joyous months and would rather cocoon and wallow […]