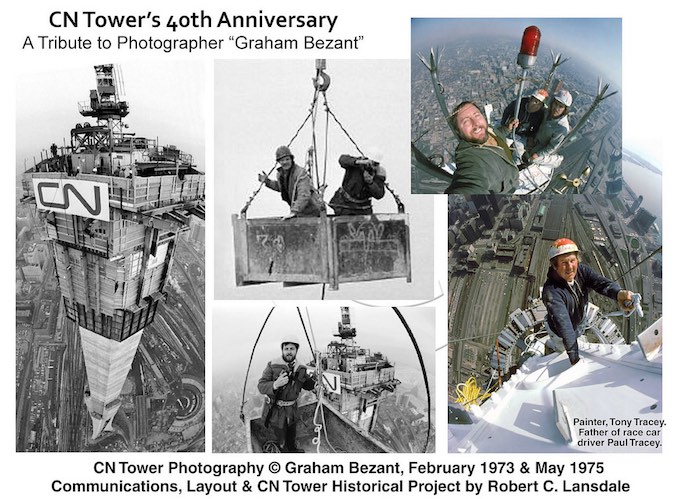 These great photos with descriptions were submitted to us in celebration of the upcoming 40 year anniversary of the CN Tower completion.

For those who remember the early 1970’s, there were two well known Toronto Star photographers who “competed” with each other for the best photos — Graham Bezant & Boris Spremo . Through the help of another well known Toronto SUN photographer of the CN Tower, RC Lansdale was able to locate Graham living in Australia. As a tribute to his memorable work done on the tower for the Toronto Star, this collage was culled together with imagery provided by Graham himself.

The left 3 photos were taken on Feb 22 1974 after the last bucket of concrete had been poured. The story goes that National Geographic had been given access to the tower but not the Toronto Star. Hence, CN Tower Ltd reluctantly gave Graham one hour notice to get this photo and leave. Graham took two cameras out on the “bucket” and photographed the most iconic photo of the tower (as seen on the left side). The camera used to take this photo was a “13mm (35mm full frame) fisheye lens unlike the circular fisheye”.

Graham explains, “We did get official permission but only after months of asking and following a National geographic photographer was provided a similar viewpoint. I was friends with the N/Geo photographer and when I heard what happened I told the Star management. They were livid. I think Canadian national pride came into it but whatever it was, the big stick approach worked and we got our bucket ride on 1 hours notice. They stopped the crane work, lifted a bucket from ground level. The supervising rigger got in the bucket with me. I wore a harness attached to crane hook. It was quick. The weather was overcast. The lighting was low. We went out in the bucket from the top of the structure swung around to the CN logo and then straight back in. Possibly 5 minutes tops. I believe the safety officer was given a coffee break as there were some “please explain” questions for the top construction brass after the photos appeared. All very worthwhile.”

The two photos on the right, from May 1975, came about from Graham becoming friends with the tower’s antenna painter, Tony Tracey (father of legend race car driver Paul Tracey). Graham suited up in painter overalls (to get past security) and accompanied Tony up the tower to the very top where he captured some of the very best photos made at that time. Had Graham not made such risks then we would be without such memorable photos.

As Graham recounts of his May 1975 climb to the top, ” It was very hard, that is why it took 45 minutes. I only took two cameras with one lens on each body as I knew the weight, the climb and the size of anything larger than a couple of cameras may not have made it to the top. However, it was exhilarating getting to the top, poking one’s head out into a “unknown stratosphere.” As you emerged from the antennae section you were “in space” as it were. There was no wind that day. It was so quiet. It was like walking in space. I was tired from the climb. I had to rest for a while. Then when I looked down I put it all together as in time and space. I can still feel how it felt, especially when I look at the photos”

Graham also adds, “Heights never bothered me. I was always very careful. There was no wind that day and this was the chance of a lifetime to get such a photo. It had been planned in my mind’s eye since the construction started. For this assignment I did NOT get official permission. I think it was my day off. I dressed as a painter, hid my cameras and climbed up with two painters. (The blokes in the photos). A safety harness would not have helped. What would you hook it onto? It may have even made it more dangerous. I think the most dangerous part was the climb up the steel ladders inside the antennae. They were on opposite sides and one had to swing over at the start of each ladder segment. Going straight up in the antenna after climbing the from the restaurant pod was not easy as I remember. By hey – young and full of ego – where would be without those who challenge ourselves.”

As a cross link to another interview that RC Lansdale made, Bob Bronstein of CANRON (builders of the antenna) recounted “We came back on the Monday morning and found all of my vertically hanging fluorescent lights out of alignment (which we used to determine if the antenna was plumb). After reading the newspaper, it seems that Graham Bezant had moved them while climbing the tower”. Each was made aware of this story by RC Lansdale 40 years after the fact.

Also, as something that few people know, Tony Tracey used the large proceeds of his painting company to fund the racing career of his son Paul.

RC Lansdale would like to thank Graham Bezant for returning all of his emails and for openly providing these photos for the enjoyment of others.