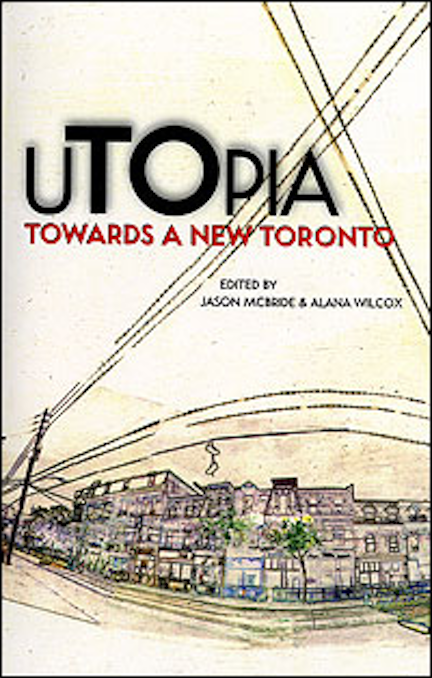 Every city is ultimately the product of the utopic visions of its citizens and leaders. The word utopia refers not only to a perfect place or condition, but also to the impossibility of perfection itself (nerd moment: the word comes from the Greek  ‘ou’ + ‘topos’, which literally translates as ‘no place’, but first appeared in English in Sir Thomas More’s book Utopia which describes his vision of the perfect republic). This is why utopic visions, by definition, are always doomed to fail. But, they fail in really interesting ways a lot of the time, and Toronto is basically a compendium of sometimes interesting, sometimes beautiful and sometimes frustrating utopic failures – all of which contribute to the reasons we love our city.

In uTOpia: towards a new Toronto 34 different writers from as diverse a range of perspectives, interests and disciplines as the people of Toronto themselves (well, almost) contribute their answer to the question: how can we make Toronto as ideal as possible? Toronto, one of the pieces accurately points out, is basically a teenager – still young enough to hold on to hope, but old enough to have accumulated some wounds along the way. What we must do, uTOpia suggests, is use the benefits of our youthful optimism to promote progressive and innovative utopian agendas – things like a better TTC, more public washrooms, changing the voting age from 18 to 16, creating a network of tubes for bicycle lanes, and my personal favourite, a roller coaster from harbourfront to the islands. At the same time, we have to take note of what already makes Toronto a wonderful city to live in – things like pedestrian Sundays in Kensington market, families like the Zedler family who have been contributing to the art scene for generations by making downtown accessible to artists (most recently in the form of the 401 Richmond building), sidewalks that hold the imprints of those who were there (you know, when people doodle in wet cement), and neighbourhoods that remain unique, diverse and downright lovable.

Ever since I cracked the spine of uTOpia, I’ve been seeing the city in an entirely different way. I notice the design of the manhole covers, the age of the sidewalks and the staples left in the wooden posts that line our streets, reminding me of all the events gone by the posters referred to. I’m more conscious of the way that Toronto is comprised of the ideas and actions of the real people that have lived here and I feel more empowered to contribute to the future of Toronto myself. Although of course Toronto will continue to become itself, we all play a vital role in deciding what that will be.

If that doesn’t make you wanna run out and grab this book, I don’t know what will.

RENCONTRES explores Toronto through the eyes of a French tourist

This past week, I had the great pleasure to have been able to read Fifteen Dogs, the new novel by […]

It probably won’t surprise you, on a site like this, to hear that I love this city and think it’s […]