Linwood Barclay is a hack.

But he’s a decent hack, and anyway he’s our hack – formerly one of Canada’s top humourists, he chucked it all in to try his hand at crime fiction over a decade ago. Millions of sales and several TV/film adaptations later, it’s probably safe to say that Barclay made the right choice. Still, it’s hard not to be disappointed that Barclay’s witty observational humour, which for a time situated him as “Canada’s Dave Barry”, has given way to a career churning out paperback thrillers – twenty-five and counting, as of Take Your Breath Away.

As airport fiction goes, Take Your Breath Away is actually pretty good. Characters generally behave logically. They ask questions the reader would ask; they speculate what the reader is already speculating. They usually don’t run towards danger; heck, they even call for help when they need it. The least logical/rational characters – a troubled sixteen-year-old kid and an avowed anti-vaxxer – are illogical because they’re supposed to be illogical. Twenty-five novels is enough to figure out how to create tension without relying on lazy plot contrivances – though Breath does have one or two too many busted cell phones – in order to get there. I enjoyed my time with the quick and breezy Breath, though I did struggle with some of Barclay (the novelist)’s crutches, which were never present in Barclay (the humourist)’s earlier writings. 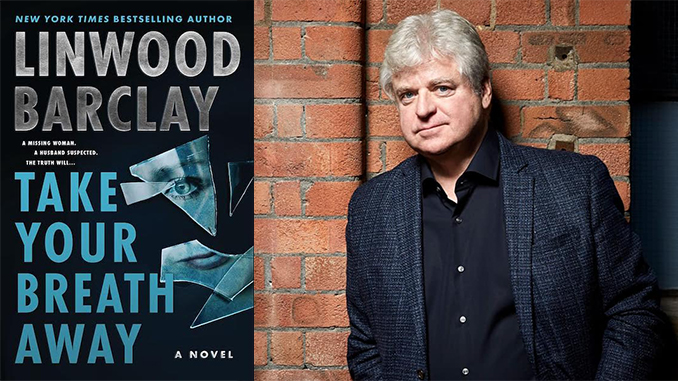 ALL THE OLD FAMILIAR PLACES

Take Your Breath Away follows Andrew Mason, husband to Brie Mason, who has been missing for six years. After a brief prologue told from Brie’s perspective – and hinting at her fate – the bulk of the novel follows Andrew as he grapples with the possibility that, all these years later, Brie might be back. A strange woman, looking strikingly like his missing wife, has shown up at their old house. An eyewitness and grainy footage from a home security system can’t confirm if it’s her, but news gets back to Andrew, and, soon enough, to others in Brie’s life who have been holding out hope for her return. If she really is back, where has she been all this time? And if she isn’t, then who, precisely, is this woman with the more than passing resemblance and a tendency to show up at Brie’s old haunts, albeit never long enough for people to concretely identify her?

It’s a good hook to build a thriller around, and Barclay does the requisite job of keeping the reader engaged, from the first “reappearance” through to a satisfying conclusion which leaves no plot threads unresolved. While there are the expected red herrings, nothing really stands out as an egregious misdirect. The resolution of the mystery does require a bit of a leap, as it relies on previously unreported backstory to explain character motivations, but at least these motivations follow a certain logic.

There are a few things about Breath that make it stand out slightly when compared to others of its ilk. For one, for most of the story, there’s nary a murder in sight – although it wouldn’t be a Barclay novel if the bodies didn’t eventually start piling up. It’s also interesting in that it’s really about the people affected by a crime (or possible crime), as opposed to the crime itself. There’s Andrew, who’s started a new life with a new partner and her kid brother, who he’s generously taken in. There’s Brie’s family, including a bitter sister, easygoing brother, and a dying mother seeking some resolution – even if it’s the news her daughter really is dead – before she passes on. I won’t pretend that any of this gives Breath much weight, but at least it’s more than your standard A dead, B/C/D suspects, E solves everything.

Barclay may have been a very funny humourist, and he might even be a decent plot architect, but he is not a great novelist. And look, I get it, nobody comes to airport fiction expecting brilliant prose, but some of Barclay’s writing is plain lazy.

Probably Barclay’s worst sin is the way he regularly and awkwardly shoehorns key plot details into dialogue or a character’s thoughts. A mother says to her son, “those people have jobs, like you at the bank.” (When was the last time your mom reminded you where you work?) Another character, having casually mentioned in conversation that her husband is away, goes on to muse about how, “his friend and business partner, Greg Raymus, was up there with him, at his own lake house, a stone’s throw away.” That’s a lot of information packed into one sentence, including, as Barclay loves to include, a character’s full first and last name. It’s an economy of exposition that might be impressive if it wasn’t so clumsy.

There are plenty of other hallmarks of airport fiction to be found in Breath. There’s the overuse of the word “grin”. The gratuitous f**ks and s***ts that pepper not the dialogue but the narration. The laborious descriptions of each component of an action, so that something as simple as “she phoned Andrew” becomes, in Barclay’s prose, “Jayne was still holding her phone. She brought up Andrew’s number, tapped on it, and put the phone to her ear.” Then, of course, there’s that cover, heralding the “New York Times bestselling author” (that’s usually a sign to be wary) and featuring a tagline with an ellipsis in it. Never trust a book with an ellipsis on its cover.

Every once in a while, the Linwood Barclay of Take Your Breath Away remembers how to have a bit of fun. The events of Breath plainly take place in a post-COVID landscape, allowing Barclay to take shots at anti-vaxxers and, in one darkly comic moment, justify the serendipitous presence of a pair of rubber gloves. Barclay also has a keen eye for the mundanities and weirdness of the North American suburban landscape, with its cookie-cutter homes and decaying shopping malls. One character gets drunk and knocks over a few tombstones out of boredom; the reader isn’t necessarily supposed to condemn them for it.

Anyway, Breath really is an entertaining read, notwithstanding the sloppy writing. The narrative is logically coherent, its characters behave consistently, and it has a resolution that (mostly) makes sense. For a page-turner that doesn’t require much in the way of intellectual investment, you could do worse than Take Your Breath Away. Sometimes you just want a tidy little mystery that gets wrapped up without betraying the reader with a ridiculous red herring or two; Breath delivers on that front.

*
Visit the official website for Take Your Breath Away here.