Proxima Command has a bit of a branding problem. A Star Trek simulator in all but name, its creators have instead opted to advertise it as an “escape room spaceship.” From a certain perspective, this makes sense. Escape rooms are popular and understood by the public, and Proxima Command at least superficially resembles the experience: it’s an immersive, interactive group activity, one that requires you to work together to solve problems and get out of tricky situations (relatively) unscathed. Anyway, it’s only logical to compete in that market, rather than trying to sell people on “Star Trek but it’s not Star Trek and we swear it’s not as nerdy as it sounds.”

Still, “escape room” ultimately does Proxima Command a disservice. For it is unlike any escape room you’ve ever been to – and it is totally awesome. 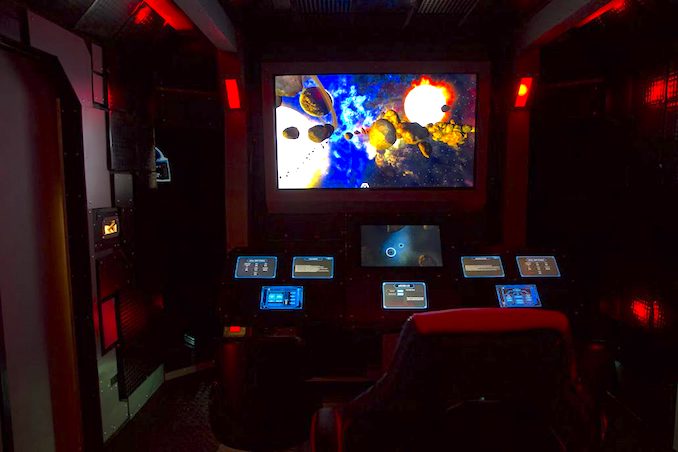 As in Bridge Crew, each participant in Proxima Command is assigned a specific crew role: helmsman, tactical, engineering, science, and the like. As in Bridge Crew, crew members must coordinate to complete a series of missions, responding dynamically to whatever occurs on the beautifully realized view screens. Fly into battle against marauding space bandits. Navigate an asteroid field. Deliver desperately needed supplies to a damaged ship. Each session of Proxima Command lasts approximately one hour, with the goal being to complete a string of connected missions to close out an “episode”. There have been three episodes released to date, with more to come.

Proxima Command can host up to seven players, though the ideal seems to hover around four to five. That way, some players can do double-duty on the less interesting roles, like the comms position which, much like Uhura herself, is mostly relegated to opening and closing hailing frequencies. (Not to knock Uhura. Uhura is great, but, unlike on Star Trek, there are no away missions for her to have fun on.)

Action all takes place on the bridge of the starship Odysseus, a wonderfully designed set with big bright touchscreens at every station, along with oversized view screens that serve as “windows” into space. The touchscreen interfaces (a series of networked tablets) are satisfyingly tactile, while sound and lighting effects add to the sense of immersion. There are a few other immersive surprises we won’t spoil here, but suffice it to say the designers have done an incredible job of making you feel like you’re on the bridge of a spaceship. That said, assuming the Odysseus eventually gets a retrofit, it would be nice if the seats had a bit of rumble or movement like those gimmicky “4DX” seats at the cinema.

Almost everything in Proxima Command is a team exercise. Travelling to a new quadrant? First, the Science Officer scans for and sets up the correct route. Next, the Chief Engineer allocates power to the engines and fires up the warp coils. Then, the Helmsman lays in a course and punches the “Engage Warp” button. Finally, if someone is roleplaying the Captain, that’s their cue to say the magic words.

Initially, it can all be a bit overwhelming, but everything is intuitive, and you are always rewarded for talking things over with your crewmates. It’s rare that you’ll ever get stuck, because, unlike an escape room, Proxima Command is not supposed to trick you. It’s supposed to make you feel cool.

One thing we really liked about Proxima Command is that the only “puzzle” is figuring out how to work together. There are no obtuse riddles or hidden items, no secrets to figure out. Every person has their touchscreen in front of them, and every person has to communicate with everyone else in order to progress. If your group is anything like ours, this will probably result in a lot of screaming and laughing, as the Odysseus repeatedly blows up due to crew incompetence. Don’t worry, though: a “death” merely resets the latest section of your mission, burning a few minutes off the clock without forcing you to restart from the beginning. Checkpoints are plentiful and generous.

Undoubtedly, Proxima Command’s weak point is the acting, or rather, the lack thereof. Presumably for budgetary reasons, the on-screen characters you interact with are all crudely animated video game-like creations, as if they’ve been ripped from an early ’00s PC mod. There aren’t many of these encounters – mostly, it’s enemy aliens hailing you to threaten your destruction – but they’re clumsy and they suck you out of the experience. Proxima Command would greatly benefit from instead having these sequences play out as pre-recorded videos. Hire a few local actors, get them to ham it up in front of a green screen, and the whole experience would be significantly improved. We’ve seen it done at plenty of escape rooms, and there’s no reason it wouldn’t work here.

These weaknesses aside, Proxima Command is brilliantly and often hilariously immersive. There’s nothing quite like mocking that one rookie ensign (it was me) who keeps haphazardly smashing into asteroids because they can’t figure out the impulse drive. Sure, the Enterprise might get Starfleet’s best and brightest. But the Odysseus gets all the dorks who know how to have fun.

*Note: Proxima Command does, in fact, have a much more traditional escape room experience attached to the main attraction. While we did not get the chance to experience it, once we’ve had a chance to “Escape From Space Station X”, we will be sure to share our review.