For those who care about such things, the Internet debate surrounding the “greatest toys of all time” has been surprisingly cordial. There’s the Rubik’s Cube, sure, and the Yo-Yo. Play-Doh is up there. So too, most would agree, is the Sphero BB-8, that magical and tragically short-lived remote control Star Wars droid that looked and moved exactly like the thing on screen. (Yes, I still have my BB-8. Yes, it is still adorable.)

The LEGO line of toys is, of course, near the top of the list, and if you had to pick one LEGO figure to represent the pinnacle of Ole Kirk Christiansen’s 1932 invention, there are plenty of creations that would fit the bill, including any of its ubiquitous Star Wars crossovers from over the years. Still, barely a few weeks into its existence, I’d argue we have a new candidate for Greatest LEGO (and therefore Top 10 Toy) of All Time: LEGO Optimus Prime. A toy mashup so ingenious in concept and so brilliant in conception that, years from now, we will still be talking about it.

The LEGO Optimus Prime is here. It is everything you dorks could have hoped for. 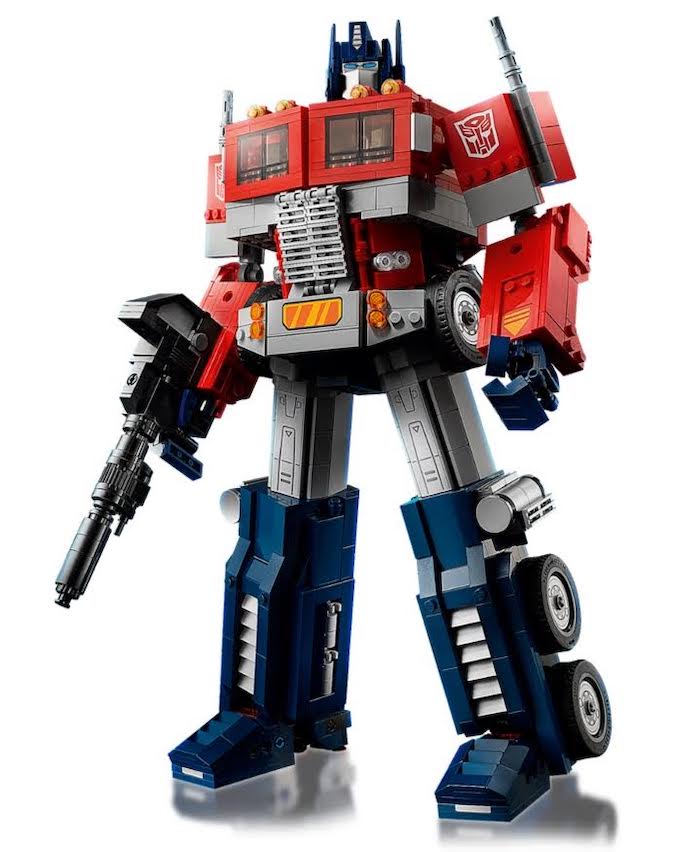 LEGO Optimus Prime transforms. That’s really all you need to know about it. It can stand like a robot-dude, or it can fold down to look like a big ole semi truck. You can swap back and forth with ease.

To be clear about this: Optimus transforms. As in, you bend and contort him on his little LEGO hinges, and he switches from one mode to the other. You do not remove any LEGO bricks to make this happen. You do not have to take him apart and rebuild him, as you would in those (still awesome) 3-in-1 sets. Optimus works exactly like any other Transformer, except he’s built entirely out of LEGO.

In a way, this is almost disturbing. The fact that LEGO now knows how to do this raises all sorts of questions, such as: why bother with regular LEGO ever again? Will we soon be getting a LEGO Boba Fett who transforms into LEGO Slave I? Will the traditional LEGO firefighter set make way for a LEGO firefighter that inverts to reveal a LEGO cat stuck in a tree? These questions remain uneasily unanswered for now, though stay tuned to Toronto Guardian for the inevitable LEGO Transformer Batman/Batmobile.

Sticking to Prime, it’s a beast of a figure. Standing 13.5″ (34 cm) tall in robot mode, it’s a towering addition to any toy collection or respectably decorated bookshelf.

Putting Prime together takes time (hey that rhymes!). Like all modern LEGO builds, pieces come prepackaged in numbered sections: Bag “1” contains all the parts for the truck cab, Bag “2” is for the left leg, and so on. It’s a smart packaging choice LEGO adopted years ago as sets got more and more complex, starting right around the first LEGO Star Wars toy in 1999. (It was an X-Wing. It was also awesome.) 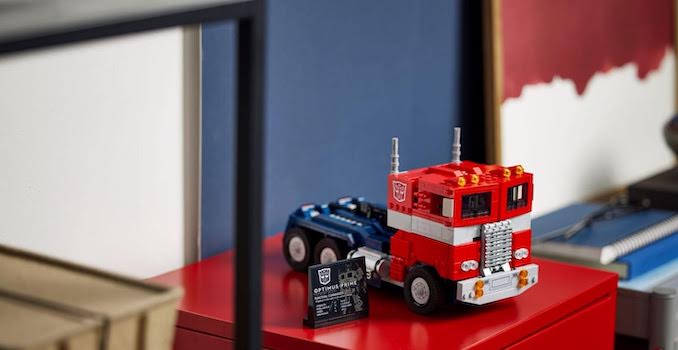 While the resulting robot-truck-dude is the most exciting part, any LEGO set is really a two-part experience: building, then admiring.

There’s always been something half-meditative, half-stressful about assembling the more sophisticated LEGO sets. It’s a nice way to focus the mind and drown out outside distractions but, if you’re anything like me, it’s also a nice way to repeatedly panic yourself when you become convinced you’ve lost one of its 1,500+ pieces.

Putting Optimus Prime together is immensely satisfying. It’s neat seeing how the internal structure of a transforming LEGO set works, especially when you start to realize how certain pieces – this hinge here, that socket there – are going to connect to the overall build. Often you might find yourself wondering why, exactly, a certain piece goes a certain way, only to have that “aha!” moment when you see why it’s necessary.

Seriously, though – make sure you have a big enough build surface so that when you do inevitably drop something, it doesn’t vanish under the floorboards.

As for the transforming, it’s, well, all rather mind-boggling. Joseph Kyde, the genius designer who came up with LEGO Optimus Prime, has done an astounding job of leveraging existing LEGO pieces to build something altogether new. A longtime member of the Transformers fan community, Kyde is one of those lucky souls so good at his fandom that he was hired to work on the real thing. (See also: all the modders invited to make Sega’s Sonic Mania.) I’d hesitate to call transforming easy – much like a high-end Transformer, it requires careful manipulation of a number of moving parts – but boy does it ever work. Just look at the photos accompanying this article. If I hadn’t sworn it true, would you believe I didn’t need to detach a single LEGO brick in order to transition between robot and truck modes? Credit also to the nerds at LEGO for ensuring this Prime comes with both the cartoon-accurate yellow truck bumper and the “Generation 1” toy-accurate grey bumper, which you can swap between at leisure. (For my money, the yellow bumper looks better.)

As always with these complex LEGO builds, there are some minor annoyances. The LEGO step-by-step instruction guides are nigh-impeccable, but occasionally you’ll need to stop, stare, and rotate until you decipher a particularly inscrutable direction. Also, I don’t know if this counts as a LEGO critique, but spend too long building something like this and I do start to get awfully stressed. Until Prime was finished, I kept convincing myself that I was going to somehow miss something, that I’d be forced to take it all apart once I realized my error at the very end. Unless you’re a LEGO pro, expect a moderate amount of sweat to fall from your brow during the course of your Prime build.

All right you dorks, it’s that time of year again. Wookiee Life Day is upon us, and with it comes […]

Cool Things to Check Out at the 2019 Canadian International AutoShow

The Canadian International AutoShow is back for 2019 with a week filled with new cars, tech, art and more. Each […]