Across the 2+ hours of its KURIOS: Cabinet of Curiosities, on now through July 10th at Ontario Place, audiences will gasp, laugh, and quite possibly, duck. It’s that kind of spectacular. 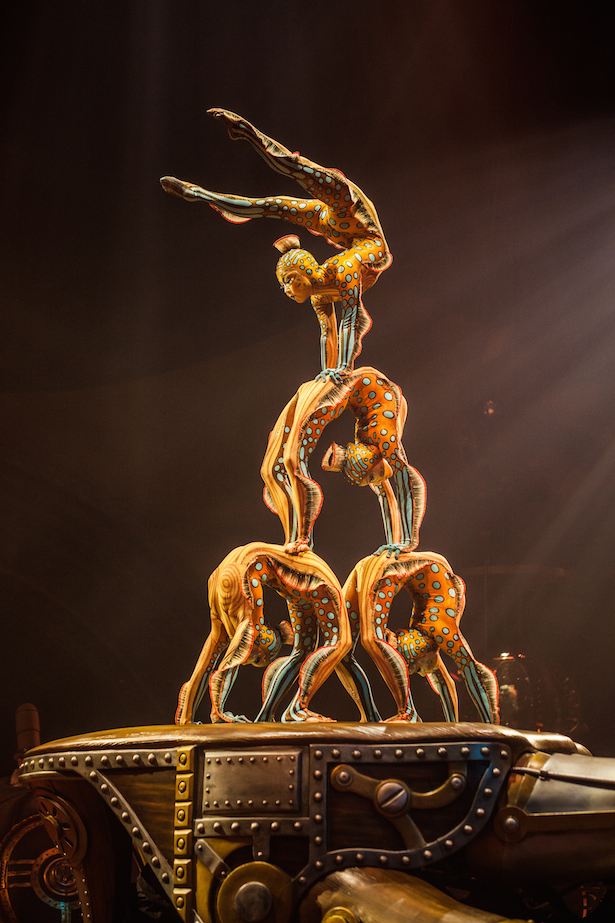 Cirque du Soleil’s steampunk-themed KURIOS is a high watermark in the circus troupe’s long and distinguished history. From its opening juggling act through the closing banquine, the skill on display is extraordinary. Combined with an evocative 19th century sci-fi aesthetic, all steam engines, large brass machinery, and Wright-worthy flying machines, KURIOS grabs your attention and never lets go.

As always, the best parts about KURIOS are the acrobatics and other technically demanding performances. As always, the worst part is all the clowning.

Right off the bat, a highlight is the juggling performance, which opens the show. Everything about the juggling is impressive, but the “turn”, so to speak, when the difficulty escalates dramatically and the juggler winds up swinging midair, is the first of many moments to elicit audible gasps from the packed big tent.

Other highlights include the trampoline segment, which takes place on an enormous “Acronet” spread across the stage, and the “Chinese Pole”, in which a single performer climbs up and down, and contorts himself, along a single vertical pole erected mid-stage. Still, the somewhat surprising showstopper is the one with the least compelling descriptor: the balancing act. You won’t know how he does it, it’s probably just magic anyway, but the “aviator” who manages to balance on an increasingly precarious pyramid made up of rolling cylinders, is truly a sight to behold. By the time he too is swinging forward and backward midair, all while balancing on a rolling pyramid stacked six feet high, you’ll wonder why you can’t even manage to stand on one foot for more than a few seconds.

There are no lowlights, exactly, in KURIOS, but all the clown antics do start to wear thin. We get it, it’s a circus tradition, and it’s nice that Cirque’s “elevated clowning” is more than just painted faces and big red noses. But nearly all the clowning sequences – from the “invisible circus” bit which is basically an oversized flea circus, to any and every audience participation gimmick – drag on too long, even allowing for the fact they’re covering for some behind-the-scenes costume/scene changes. 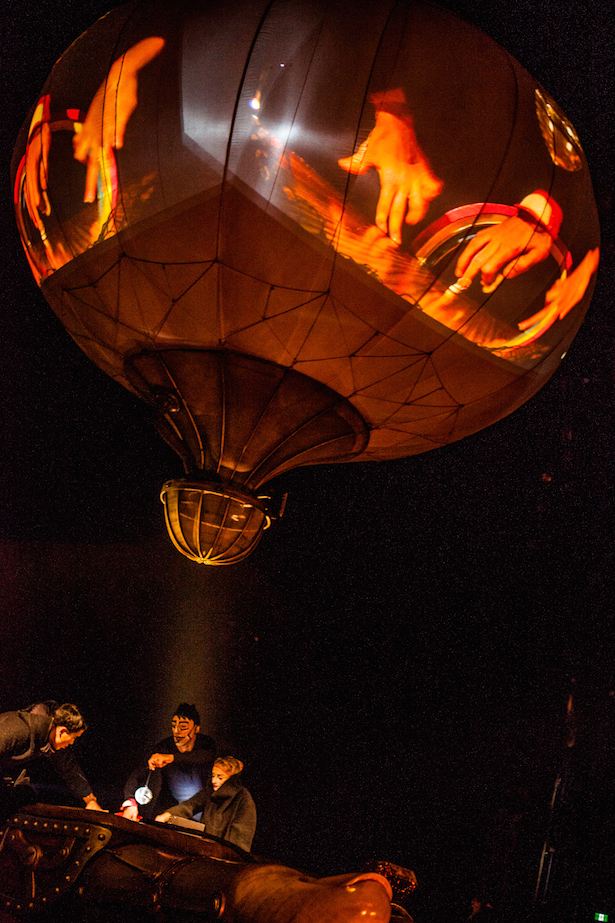 One thing largely lacking from KURIOS is a lot of the beauty that used to characterize Cirque du Soleil. Back in its early years, Cirque was notable for its theatrical magic, with beautifully designed puppets and a design philosophy that prioritized the ethereal, the wondrous. Later still, artists like Robert Lepage helped to elevate the production design to something out of a fantasy landscape. While we can’t speak for all twenty(!) of Cirque’s current productions, KURIOS trades much of that in favour of big, loud, and brassy. Which, steampunk being steampunk, makes a lot of sense, but we were a tad disappointed that, with one or two exceptions, there were no real moments of wonder.

Those exceptions are, however, worth commenting on. The first is the “Upside Down World”, in which the entire act is mirrored by identically-dressed actors suspended upside down from the ceiling. While one acrobat climbs a tower of stacked chairs towards a chandelier, his counterpart lowers himself upside down in mirror image. It’s a compelling concept, elevating an otherwise standard act – a dude climbing – into something unusual.

KURIOS has one dalliance with the properly magical in its all-too-brief “Theatre of Hands.” In this act, a performer’s hand – projected on a large video screen above the stage – is the featured player, moving and dancing its way through a miniature-scaled set. The middle and ring fingers serve for legs, while the pinky and index fingers are the arms. It sounds silly (and some of it, like the “breakdancing”, really is), but its ability to immerse the audience in its miniature world, without making us scoff at the fact we’re watching someone’s fingers dance on a tiny set, is impressive. It’s an idea that’s been done better elsewhere – specifically, in CanStage’s kiss & cry and Cold Blood performances a few years back, performances which KURIOS was obviously inspired by – but it’s still a remarkable bit of theatrical magic.

Finally, a note on the atmosphere: by our count, the majority of the audience consisted of adults. Perhaps surprising, given the (mostly) kid-friendly reputation of Cirque du Soleil, but totally in keeping with the fact that KURIOS is intended to blow everyone’s minds. And rest assured, minds were indeed blown.