Tired of looking for funny holiday movies? This week’s featured comedian, Joel Edmiston, recently released ELFING AROUND, a full-length, epic, comedic, revenge-tale, Christmas movie that is sure to have you laughing for the full 80 minutes! We caught up with him to talk all things comedy. 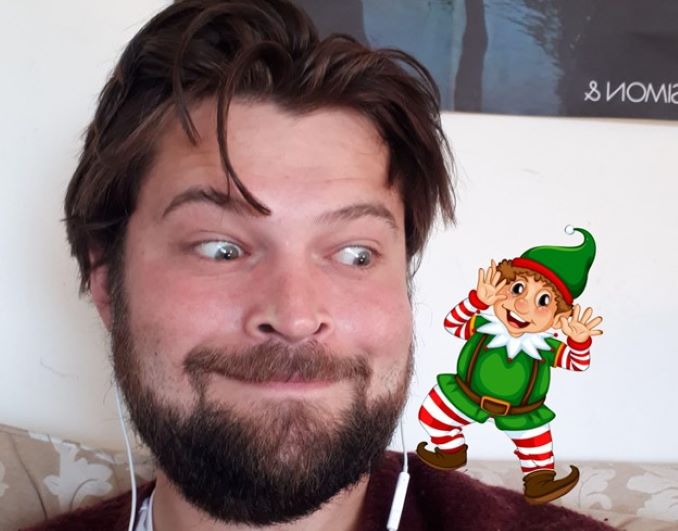 I actually don’t write any of my jokes or scripts. Everything I say, do and write is whispered to me by the time-travelling fish monster who visits me every Sunday. Also, I used to be known as the guy who would tape pizza to his face at open mics.

I used to tape Conan O’Brien every night, because my parents wouldn’t let me stay up that late, but I usually would tape my eyelid open and stay up that late anyway, and then watch the taped version again after school.

I give a raccoon a box of ravioli to punch me in the face.

Kensington Hall, a cold, darkly-lit basement in Kensington Market. I did some of the most nuts stuff down there. I got a tattoo on stage, rolled around in a root-beer-filled kiddie pool, danced around and drank beer with friends, etc. RIP that place.

When we were allowed to go to shows, I would have said by going to shows. Nowadays, I try to listen to local podcasts. Landlord and Tenant Podmess is a great one. And so is Spooked!

YES. I made a feature-length movie called ELFING AROUND. I created it using only my voice, license free music and watermarked stock photos. I’ve been working on it since April and I am so happy and proud that it’s completed. I’m so excited for people to see it. The movie is about Santa Claus on a revenge mission in space. It’s like nothing you’ll see ever, anywhere.

Ben Stager and Conrad Osei are my friends and are hilarious, truly-unique talents who inspire the hell out of me. They are also working hard at producing content for you to watch online during the pandemic. Ben has my favourite Twitter account of all time (@Bennnnst). Check them out.

Why did the chicken cross the road? To go to the laptop repair shop across the street so she can get her laptop fixed and watch ELFING AROUND on Youtube on December 3rd.