Habiba El-Sayed is a Toronto-based contemporary ceramic artist. Inspired by Islamic architecture and human vulnerability, she uses a variety of materials, performance and temporal techniques in her works. She focuses on connecting to, exploring and interpreting aspects of her identity, particularly as a Muslim woman living in a post 9/11 world.

We had a chance to catch up with the incredible artist as she preps ahead of her fun “Clay Date” event at the Gardiner Museum. 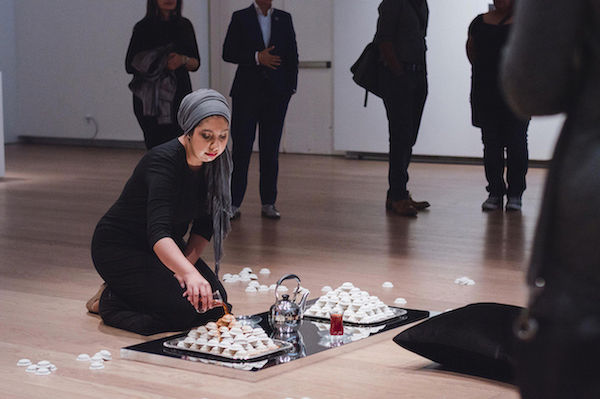 The medium of clay is so raw and can be so representative of life. What are your thoughts on that?

One of the reasons I love working with raw clay is how reflective of our bodies and emotions it can be. It can be incredibly strong but also very fragile. It’s mouldable and changeable and represents transformation and reclamation so perfectly.

Performance art is can be emotional and moving both for the audience and the artist. Can you tell us about your performance piece “Weight of Apology”?

It was a very cathartic piece for me. It was the first time I had inserted myself into my art that way. Over 8 days I built a fence-like structure out of raw clay as the audio of newscasts reporting on different terrorist attacks played in the background. As the recording played, I frantically built the structure even as it began to slump and fall apart. Not only was the clay illustrating those feelings of exhaustion I had been experiencing, but the physical strain on my own body was also visible to the audience.

You’ve often referred to 9/11 and how much that has impacted what you do. What do you wish people would understand through your art as a Muslim woman?

I think it’s important for people to understand that Muslim women are nuanced and not a monolith. I think it’s time that we take control of our own narratives. The way Muslim women are often depicted is in a dehumanizing or polarizing way as either submissive or sinister. My art is just a reflection of my own lived experiences, vulnerabilities, dreams, sexuality and interests.

Along that thought, what challenges have you had to overcome within your culture and your works?

Often I am tokenized or asked to be in shows specifically about diversity. I find that to be reductive sometimes. Now and then privilege has been a factor in preventing people from wanting to engage with my work, as they cannot see the point or think my work is too negative. But most of the time I’ve found people to be quite receptive, especially as the world changes and conversations around racism become more mainstream.

What’s the one art piece you’ve done that you don’t ever want to part with?

I am not very attached to my art, as much of it is ephemeral and happens in a moment in time until I take it down. Though I have a sculpture of an Islamic archway I built in my second year in college that I would have a hard time letting go of. It was one of the biggest things I’ve ever built, and really represented a turning point in my art. Islamic architecture has played a major role not only aesthetically but also conceptually in my work. 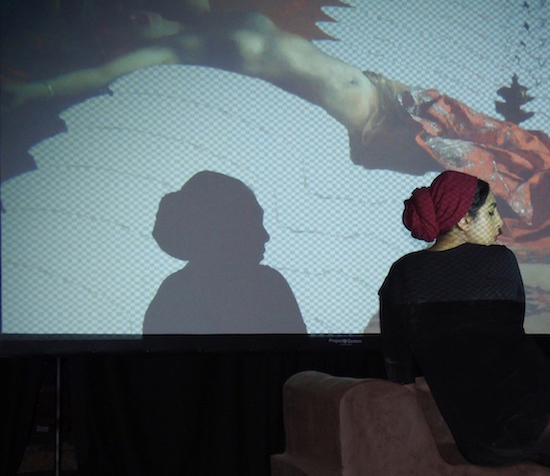 With the pandemic restrictions over the past few months, what has been affected with you and your work?

Unfortunately, all my shows that were planned this year were cancelled. I was laid off from my job as a pottery instructor, which has often been my main source of income. However, many new opportunities have also presented themselves as many things have moved online. I also am grateful for the time to reflect and adapt. My ideas were already moving toward digital ways of making art before the pandemic, so it has allowed me to consider the direction of that work.

Actually one of them is in the RAW exhibition at the Gardiner Museum right now. Cassils, another performance artist who uses clay has been someone I’ve been following for a while. I am so inspired by their work and the way they have brought Trans issues to the forefront. Their work is incredibly powerful and thoughtful.

You’ll be leading the upcoming Clay Date. Can you give us an idea of what to expect?

I am so excited to be a part of Clay Date! We will be exploring different ways raw clay can be used to express complex emotions and ideas. I will be demonstrating a variety of experimental, performative, and durational techniques and participants will be able to follow along at home. Then we will all share our work on Instagram, sort of like a virtual archive or gallery. The whole point is to get people thinking and making with clay in unconventional ways. Think outside the pot so to speak.

The Gardiner Museum’s annual SMASH fundraising event has been postponed for this year but here’s something fun! There’s a unique online event coming up on Tuesday, August 25 (7 pm to 8 pm). For a donation of $75, $100, or $125 to the Museum, participants will get access to an exclusive virtual demonstration and “Clay Date” with Habiba El-Sayed. The fundraising event includes a special package with clay from the Museum’s studio to experiment with and all sorts of goodies from local Toronto businesses.

Registration for the event is open until August 20th and the Clay Date Kits will be available for curbside pick up or delivery (additional fee).  Here is the link: www.gardinermuseum.on.ca

Known for smashing conventions, contemporary artist Ai Weiwei will once again be featured in Toronto. Ai Weiwei: Unbroken exhibition is […]

What do we long for? That’s the theme of this year’s edition of the Community Art Space at the Gardiner […]