Canada’s news media has decided that it wants to be the main influencer/decider of the 2019 Canadian federal election. For the last few weeks, a common thread has emerged in mainstream media reporting that confirms a distinct bias toward the Conservative Party of Canada. This is nothing new, look at the last few elections and see what political parties were endorsed by the editorial boards of Canada’s major news organizations.

Of the twenty-three papers that did editorialize on behalf of one party or candidate in the 2015 election – seventeen newspapers representing 70.5% of the editorial opinion expressed lined up behind the ruling Conservatives. Judging by the revelations that Postmedia is applying pressure to their editors to become more conservative, this trend is only accelerating.

Think about how out of sync with Canadian voters the editorial boards of most major media news organizations were in the 2015 election, especially Postmedia, Sun Media, and the Globe and Mail. Of course, none of these organizations have learned any lessons from these failures and are doubling down on their implicit support of Andrew Scheer’s Conservatives.

Andrew Scheer has employed a never ending narrative of deceit and outright lies regarding Canada’s immigration system, and our economy, with barely a whisper of challenge from a majority of Canada’s mainstream media outlets. He lies on the most basic of verifiable facts, free from media accountability and fact checking. Yes. there are a few journalists and media organizations such as Canadaland, Press Progress, Rabble, etc. that do call Scheer out on this, but we again are being failed by mainstream media in Canada. 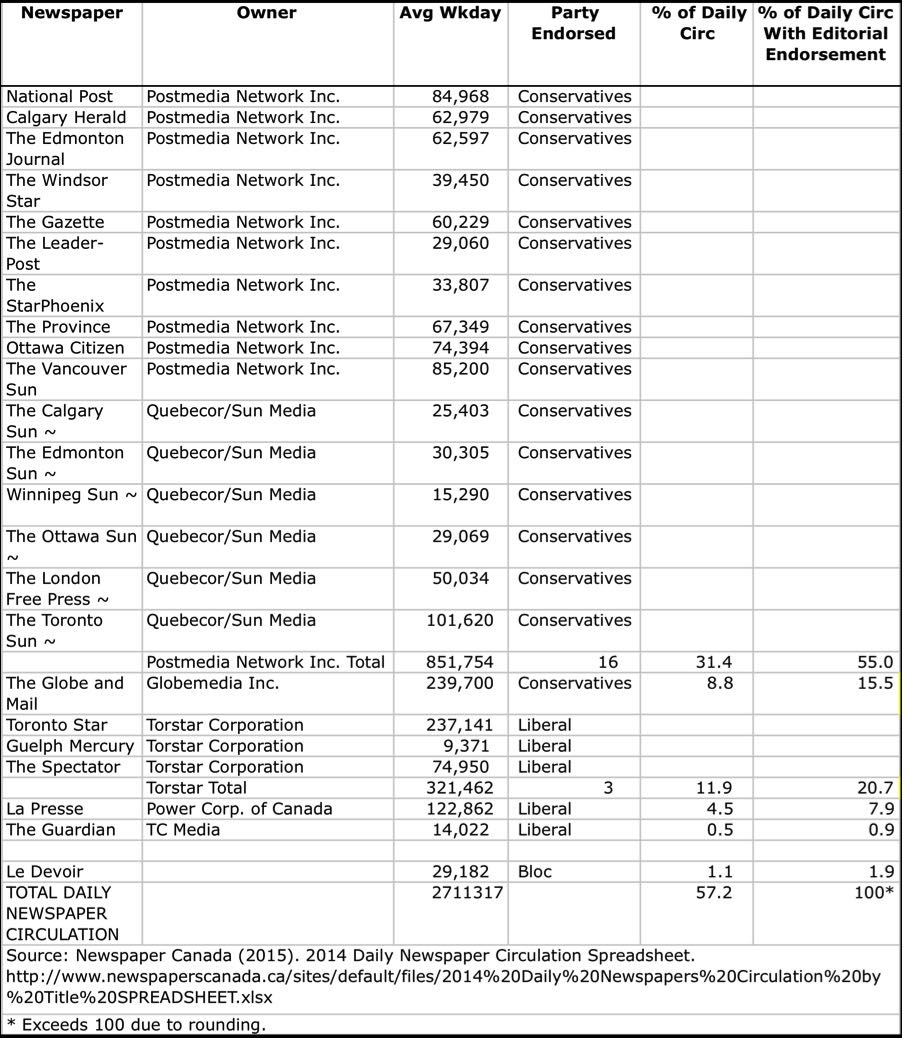 We have been failed by Canadian media. Continually failed. I am finished looking for fairness from media that has historically proven to be in the pocket of the Conservative Party of Canada. It has always been there, this demonstrable bias that I am finally realizing will never change. The fact there is an elite few in the boardrooms of The Globe and Mail, Postmedia, Quebecor, etc. that feel they are owed the right to choose who will govern us – has finally slapped me in the forehead.

My own personal epiphany.

One only has to look at the reporting of the Globe and Mail on the day of the election call to see this. The Globe has merely repackaged information previously reported about SNC-Lavalin to try and bring new life to this non-story. The RCMP has never said it is investigating the Liberal government, or the PMO, in relation to SNC-Lavalin. This is more attempted sensationalism meant to distract from the lack of an actual plan or a costed platform by Andrew Scheer and the Conservative Party of Canada.

We are on our own, we will only be able to look to each other to find the journalism that reports the news, and does not create the news. We must continue to support independent Canadian journalists and media organizations who are doing their best to stem the tide of conservative mainstream media bias, and to give it a worthy platform. The old ways of corporate media in Canada are dying and I say that we help them along to the graveyard by no longer supporting it, subscribing to it, or sharing it on social media. We have the numbers to make it happen. We only have to realize that we have the power to do so.