Air Italy announced their new service between Milan in Toronto recently and we’re pretty excited about having another option to fly. At the press conference held at the Four Seasons Hotel in Toronto, representatives from the airline were on hand to introduce the service. They also revealed their newest spokesperson Pam Ann – iconic international celebrity air hostess and alter-ego of Australian comedian-writer-producer Caroline Reid who has a cult-like following of fans around the globe. She is known for taking on the airline industry, crew and passengers by storm with her jet-set lifestyle and “aim for the stars” humour. 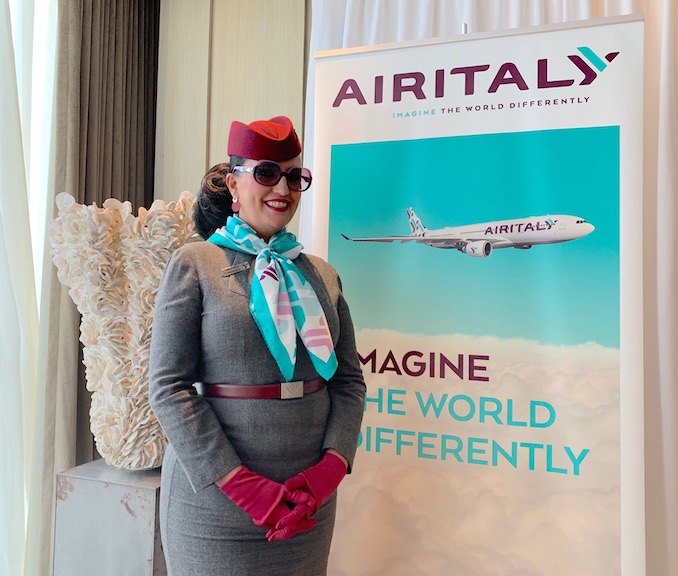 We cornered Pam Ann at the press conference to learn more about her new role with Air Italy.

This interview is about being totally fun, is that okay?

PA: And that’s what Air Italy is all about!

Canadians are not really used to associating FUN with airlines here.

PA: Really? I’ve had really good experiences on WestJet and I must say, with some of the most incredible crew in the world.

True. True. Okay, they are fun. Now, what’s your involvement with the airline? Do you have an official title?

What does that mean to you?

PA: Well, first of all, it’s very exciting because I actually have an airline! It’s a dream come true. It’s an opportunity to go to places I’ve never been before because they’re adding new destinations. They’ve got LA, San Fransisco, and now Toronto. We just flew from Milan to Toronto and it was extraordinary. The cabin is incredible.

Well, obviously you got to ride in first class?

PA: Of course, darling. Is there somewhere else?

But you know what? When I looked down the back of the plane to economy (it’s so hard for me to say that word),  it was like, to be honest with you, like business class on many other airlines that I’ve flown with. There’s actually more legroom. I like that, you know? And to be honest with you, passengers who fly regular class on Air Italy will feel like they are in business class. That’s how exclusive feeling it is. 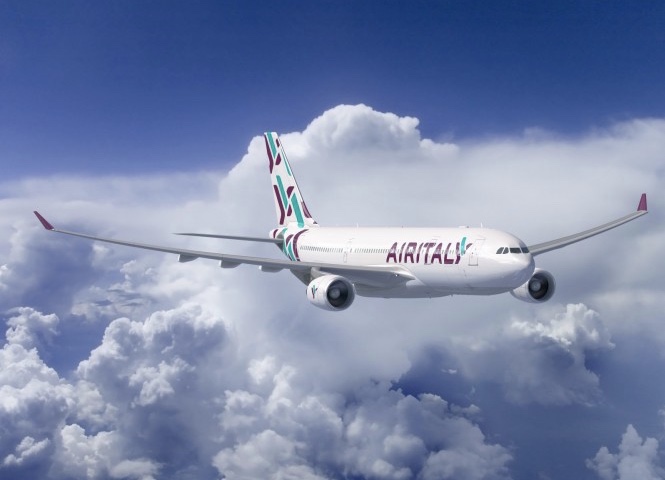 You mentioned that you just flew into Toronto from Milan. Tell us about Milan?

PA: Well, it’s about fashion for me, isn’t it? And this airline is all chic. And you know, chic is something that resonates with me very well. And you know, even when I was on the plane I took a video of people who were boarding were from all over the world. You know with me coming from Australia originally and have flown all over the world, I was used to hearing “flip flop flip flop” on airlines. But on Air Italy, it’s “click click click”.

PA: Well actually Canadians are quite chic! I mean you’re not the capital of fashion like Milan but you’re pretty stylish. But even the carry-on bags on Air Italy are chic. It’s all Gucci, Versace, and Balenciaga. Everyone makes an effort.

What do you love about Italy?

PA: I love Italian food! I love everything about Italy and how it makes you feel like family….in a good way. It’s a very passionate country. It’s about bringing everyone together. Air Italy feels like that as well. All my fashion friends in Milan from photographers to fashion stylists fly with Air Italy.

What is something we may not know about Air Italy?

PA: It’s LGBT friendly and I think this is the way of the future. I work with the gay community so this is really big news. To know that the airline is very proud to support everyone is amazing. I think it’s important especially for an Italian company to be so forward and having me as a symbol is really exciting. I’m so thrilled. It’s good to know that the community will be looked after. I feel it’s very genuine and authentic for this company to be at the helm and really trying to make a change. It’s nice to work with passionate people. With Air Italy, it’s all about connections – not just with flights but also connecting with people.

What are some things we need to see and do in Milan?

PA: So much! Duamo di Milano is spectacular and a must see. Le Specialita is a pizza place that’s a 10-minute drive from Duomo. You’ll see everyone in fashion there – photographers to designers. It’s a really humble Italian restaurant and so good. Shopping of course! Favourites include Via del a Spiga, Dolce & Gabanna, Prada, Balenciaga, and Fendi. All the Italian brands are there. Make sure you also spend some time at the airport as well. Shopping is great. (Hello, duty-free!)

Air Italy will be a major sponsor of Pride Toronto as well as Pride Milan, Pride Sofia in Bulgaria.  Find out more about Air Italy and it’s new routes between Milan and Toronto here.

Having lived in more Canadian cities than most Canadians will visit in their lifetime, Susan Waycik is a one of […]