As you head to the entrance of the latest exhibition Impressionism in the Age of Industry at the Art Gallery of Ontario you’ll be greeted with the sites and sounds of a train station. Be ready to be transported back to Paris at an exciting time in the city’s history. Grab a Tour guide on your way in and get ready to take a journey through the Impressionists’ eyes. That is, a different look and one that we may not necessarily all be too familiar with coming from well-known artists including Monet, Degas, Pissarro, Van Gogh and others. What did they see? What issues concerned them at that time? This extraordinary exhibition paints a picture at a time of change that oddly is relatable to us today. Impressionism in the Age of Industry is open from February 16 to May 5, 2019. 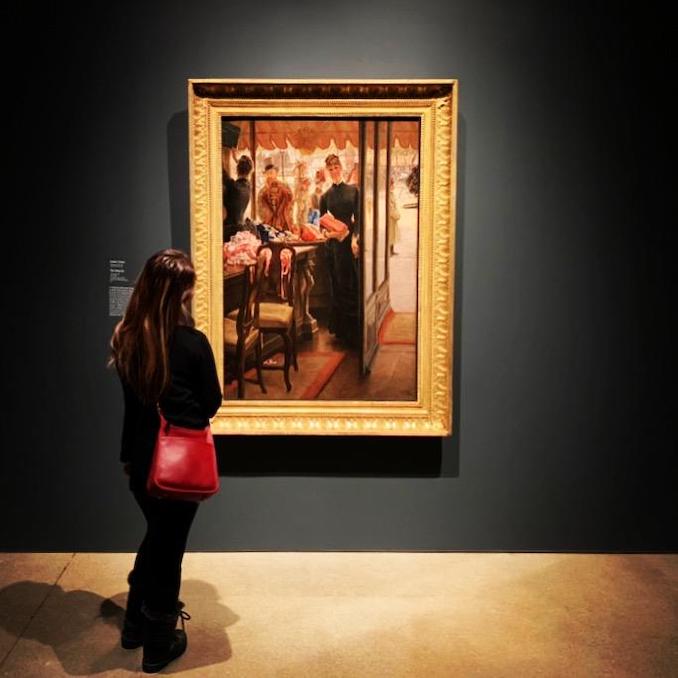 This exhibition is about French artists in the late 19th century focusing on Impressionists and Industry. Caroline Shields, AGO Assistant curator, European Art, explains, “what’s rare about this exhibition is this particular time in history is largely left out of Impressionism which is more known for depicting times of leisure and what we still associate with the period today. However, the artists were equally captivated by modernity and industry.” This is the story of industry, labour and the city of Paris and it is the first time these works are brought together to be shown to a large audience and to give a broader sense of Impressionism.

Many works are on loan from galleries, museums and private collections from around the world along side  pieces from the AGO’s own priceless collection. The exhibition also includes multiple forms of artwork including sculptures, drawings, photographs, prints and period films showing many angles and perspectives –  a fascinating look how innovation and technology influenced artists of the time and their work are shown along side traditional forms of painting and print making. Most innovative art forms like photography, cinema and film which were just invented around 1895.

The exhibition just doesn’t look at the overall theme of industry, machinery and technology but takes a closer look at the people behind  the scenes. Those who are experiencing and living the changes at the most exciting times. “Artists featured in this exhibition were riding the trains, commuting through train stations, they crossed the bridges that we see and often they got to know the workers who’s faces are shown throughout this exhibition.” said Shields. “What we see through this show is a journey that illustrates the experience of life in a time when events change. That’s a journey that feels very relevant to us today. Here in Toronto, like a lot of cities around the world, this change is thrilling and exciting but it also comes with a lot of challenges. For us today, that  involves housing, affordability, displacement of people, and transit. So the artists of the period were concerned with the same issues. When you see them working through those issues through their art, we get the feeling we can relate.”

The exhibition is categorized in three significant images of industry: Railways, Industrial Waterways and Factories. Throughout the galleries the works show not only impact of on the landscape in France but also the daily lives of people who were experiencing the shift.

Two additional sections step outside of the industrial realm to offer a glimpse of what else was happening during this time. One focusing on labour behind leisure showing the women supporting the economy behind the scenes. The other steps into the countryside of France to remind us about how farms and agriculture sustained the cities from afar.

The final gallery shows what life was like at the turn of the century around the 1900s.

Arrival of the Normandy Train by Claude Monet: The first painting exhibited is an exciting introduction and really sets the tone of the what to expect. Gare Saint-Lazare terminal linked Paris to Normandy and served as a point of entry to the city for many travelling from the outskirts. He commuted through this train station regularly. This point of entry to Paris (and to this exhibit) shows life through the eyes of the artist. Shields explains that what’s so interesting for Monet to paint this scene as it was a hub of activity. It was a hustling place and he chose to set up his easel and painted not one, but twelve works in this spot. It also has his most quintessential brush work that we associate him with and it’s shown in the way he’s captured the energy of the station.

The Shop Girl (La Demoiselle de Magasin) by James Tissot: A stunning image of a sales girl opening the door to give us a street level view of what was happening in Paris.  Streets and sidewalks widened inviting more pedestrian traffic. Large glass windows were something new as passerbys could peer in essentially “window shopping” considered a leisure activity for working class as well as the wealthy. The artist also incorporated street lamps a new technology at the time showing the infrastructure and changes he witnessed.

Eiffel Tower by Georges Seurat: A small pointillist  painting by Seurat is a real gem to see in person. He was one of the first artists to paint Alexandre-Gustave’s Eiffel Tower – which was considered the tallest built structure in the world at that time and a symbol of French industry and design. At first glance of this painting, the top of the Eiffel Tower appears to be missing perhaps because of the sunlight. However, Seraut painted it when the tower was not yet complete.

Place du Théâtre Français, Paris: Rain by Camille Pissarro: Paris had just experienced a massive structural transformation. Medieval streets changed to wider boulevards and sidewalks. Street lamps allowed for night life, public transit with Omni busses were introduced. This bird’s eye view from the Grand Hotel du Louvre in Paris shows the hustling streets in the area that was filled with upscale shops around the Place du  Théâtre Francais. Avenue de l’Opera takes the eye towards the Opera House in the hazy distance.

Le Pont de l’Europe by Gustav Caillebotte: This artist was key to the Impressionist movement. The work shown in the exhibition is one of his three greatest masterpieces. It’s a multi-layered piece. At first glance it’s  looks like a celebratory view of everything new about Paris in the 18th century. The sunny sky, a towering bridge can be considered an ode to engineering. People are strolling the streets but at the same time, a closer look would offer a different perspective. The iron bridges tower over head. Iron itself was associated more with war than with the later built Eiffel Tower. The painting also shows several people that may overall look like they are together yet each seem isolated.

Children in a Garden (The Nurse) by Mary Cassatt: Worth attention within the Labour section of the exhibition are works that depict the women who work behind the scenes. This beautiful and serene moment of a nursemaid, or today what we refer to as a nanny, giving us a moment in time of the private life of women and children. Artwork in this section that includes five works by Degas focus on the women who are supporting their employers often with long hours including the laundresses and those in the textile industry . Each expressing a single moment in time and each subject shown with dignity.

Several events, talks and workshops are planned including a Curator’s Talk on March 20 at 7 pm.  Join Caroline Shields, AGO Assistant Curator, European Art for a talk exploring her major new exhibition Impressionism in the Age of Industry: Monet, Pissarro and more. Prior to joining the AGO, Shields earned her doctorate in nineteenth-century French art history from the University of Maryland and held positions at museums in Washington D.C., Boston, and Paris.

Take time back with your family this season and get ready to explore the many events happening indoors and out! […]