Teens have always been faced with challenging social situations. We’re all too familiar with our own experiences. The new play, The Code, by Rachel Aberle, addresses society’s perception particularly when it comes to relationships, expectations and where “that” line is drawn. This dramatic production makes us all question the different unwritten rules  — what is that friendship code and bro code ?

The synopsis: After receiving backlash for instigating a student protest at her high school, Moira is initially supported by her best friends Simon and Connor. However, Simon’s support turns to anger after learning his feelings for Moira are not reciprocated. When Simon leaks a humiliating video mash-up of Moira’s protest speech, there are consequences he cannot control. The play examines complex questions about loyalty, accountability and taking power.

But here’s the thing that caught our attention. While we all hear these stories of social media spiralling issues out of control, the scenarios still continue to happen over and over again. Obviously today, it’s not just teen issues but for some adults as well. What’s interesting is in this play? How the reaction from the audience throughout the production.

We had a chance to chat with Rachel about this incredible production. 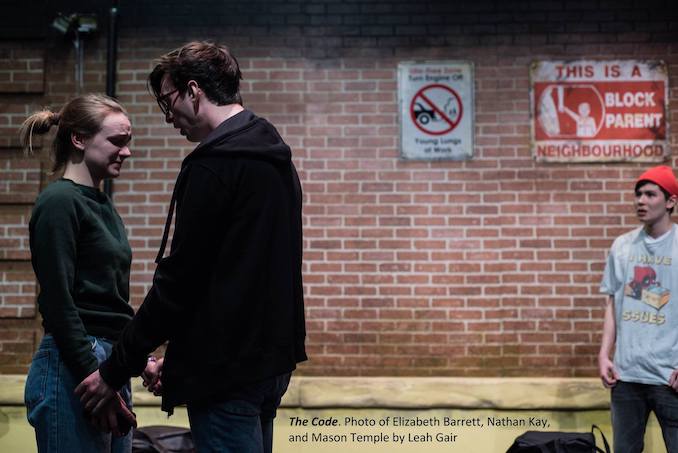 The teen audience can be a tough to please, we witness an engaged crowd at the performance. What’s the secret?

RA: First of all – thank you! That’s very kind, and I’m always really gratified to hear that the crowd is engaged. As far as my secret… I read a lot of the script out loud as I was writing, and if it didn’t feel true or sound real coming out of my mouth, it didn’t make it into the script. I also had an incredible resource in our acting company, who are all (ahem) much closer to the age group I’m writing for, so they were able to weigh in about references and slang during the workshop and rehearsal process to make sure we were creating characters that live in the now. Also, no matter what, I worked hard not to shy away from the complexity of the issues I was looking at in the script, and to treat my audience with respect, and I think teens respond to that.

Social media changed the landscape for teens today, but have the situations themselves changed much?

RA: I think a lot of the issues are the same ones I faced when I was in high school for sure. I think that navigating the line between friendship and romance is something that remains difficult, even as you get older, and rejection is going to be painful no matter what age you are. The question for all of us is what do we do with those messy, sometimes painful feelings, and how do we move forward without lashing out or hurting each other?

Any feedback from the audience that’s really surprised you?

RA: There was a group of girls at a school in Vancouver that told the acting company that before this play, they’d never seen a male character tell a female character that she didn’t owe anything to anyone but herself – and that included in plays, books, movies, television shows, you name it. It was incredibly gratifying feedback to get, but at the same time I have to say it broke my heart, that these girls had never seen those messages in any form of media intended for them. Obviously, I wrote the play because I think we can be doing a better job of making sure teens see these kinds of stories, but to hear that it was a first for these girls of 15 or 16 years old, really floored me.

The storyline could go on. How did you know where to stop and draw the line?

RA: I stopped the play when I did because if I wrote any more scenes, I feel like it would be a new story, tackling new topics. This play really digs into gendered harassment, dating dynamics, friendship and loyalty. I think any following scenes would be about the characters dealing with the fall-out from Simon’s actions in the play, and really probably mourning the loss of the friend unit they were a part of, and that to me feels like a whole new story.

If you could go back to your teen years, and knowing what you know now, what would you tell yourself?

RA: Oy… Where to start? I would tell myself that being shy about my ideals and beliefs never did me any favours, and that the sooner you speak your mind, the sooner you find out who is in your corner.

The Code is now on stage at the Young People’s Theatre in Toronto until December 14, 2018. Performances on Dec. 2 & 9 at 2PM include post-show talkbacks facilitated by representatives from CANVAS Programs and Planned Parenthood.For more information visit youngpeoplestheatre.ca