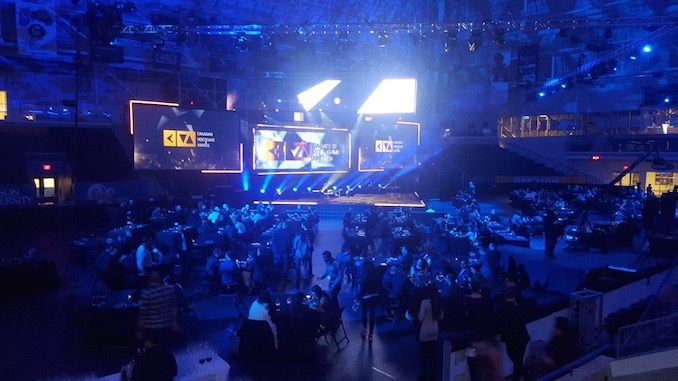 The Canadian Videogame Awards held their annual event in Toronto last weekend to celebrate Canadian developers and their games. Companies from Montréal, Québec, Vancouver and Toronto put forth their best creations for the chance at national bragging rights.

For the first time, the CV Awards also held a FanFest on the Saturday and Sunday prior to the award show. Game demos, Counterstrike competitions, indie developers and videogame related merchandise were on display for gamers to interact with and learn about.

Through this FanFest I learned about the mobile app game LongStory. LongStory is a Role Playing game of sorts that allows you to go through the experience of being a new kid at a High School. Through interactions and a “choose your own adventure” type of gameplay, the user gets to navigate friendships and fallouts. I also found out that Toronto Guardian Alumni writer Michael Lyons wrote the next part of the game which is due to come out soon. Be sure to check out this Toronto made indie game.

After the FanFest, I attended the award show. There were a lot of big names this year coming out of Canada which made it tough for smaller companies to compete. Assassin’s Creed Syndicate out of Québec took home 4 awards while Toronto’s MetaNet Software Inc’s game N++ took home the award for People’s Choice Best Canadian Made Game.

Our review of Untitled Goose Game, developed by House House. Available Now for PC/Mac (reviewed) and Nintendo Switch. WHAT IS […]