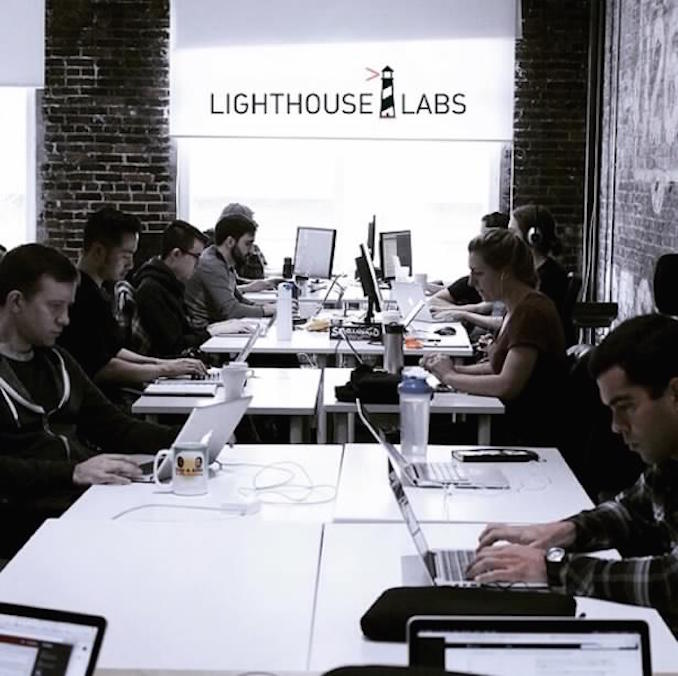 A new career in tech may be easier than you think.

Companies across Canada are going from print to web and from desktop to mobile, which is opening up a ton of jobs in Toronto’s tech industry.  According to the National Post, it’s one of the fastest growing (and most lucrative) industries in Canada: “the technology sector saw a 5.2 percent increase in starting salaries between 2014 and 2015. Mobile app developers saw a 9.5 percent jump on their pay cheques, data architects saw a 6 percent increase and mobile designers earned a 5.3 percent jump.”
For many people, however, a “career in tech” seems unreachable; hidden behind a wall of industry insiders and 4-year Computer Science degrees.

Lighthouse Labs Tech Bootcamp is changing that. A year and a half ago, they launched their coding bootcamp in Vancouver with the idea of giving people the practical skills they need. Now, 150+ graduates later, they’re bringing it to Toronto.

You may remember Lighthouse Labs from their HTML500 event in Toronto that we covered earlier in the year. The event saw tech companies from around North America gather at the MaRS Institute to offer free basic coding lessons to 500 beginner programmers.

The Lighthouse Labs bootcamp acts with that same goal in mind, but takes it one step further: they provide people with a full foundation for working in the tech industry. That means learning to code, but also providing a network of developers and industry leaders to learn from. Their success is unprecedented: they currently boast a 100% job placement for graduates.

Bootcamp students are immersed in hands-on learning at HIGHLINE, an anchor of Toronto’s tech community. They have the option of either an iOS or Web track, and for those who aren’t entirely sure if they’re ready, there’s also a part-time Web development course.

Some people wonder what exactly a coding bootcamp is like, or what kind of people attend them. I got a chance to chat with a couple of bootcamp grads in the industry.  These are Lighthouse Labs alumni at different stages in their career, all who are working as developers in Toronto.

What did you do before you got into tech and went to Lighthouse Labs?

Andy – Before I went to LHL, I was a Research Fellow at the Asia Pacific Foundation of Canada (based in Vancouver) after having graduated with an MSc in Health Policy, Planning and Financing from the London School of Economics. Throughout my research, I read a lot about technological innovations, and when I heard about Lighthouse Labs through their HTML500 event, certain ideas began to germinate in my head… instead of studying innovation, I wanted to be an innovator.

Gabby – I was doing a co-op work term for my kinesiology degree at UBC at a clinic. I noticed that there were a lot of inefficiencies in receptionist work flow that could have been improved by technology so I started looking into how hard it would be to implement and how long I would have to spend learning it. A friend then introduced me to Lighthouse Labs as he had completed it recently and was happy with his results.

Ting – I had many different jobs over the years. Right before Lighthouse I worked as an inventory clerk.

What do you do now?

Andy – During the day, I work at Grantbook as a tech consultant. They are a startup at the Centre for Social Innovation, and I was connected to them via Lighthouse Labs. I’m also excited to begin getting involved in Lighthouse Labs’ Toronto campus – I really enjoyed helping out my peers back in Vancouver, so it’s nice that I can continue doing that here and being part of their fantastic community/family. Finally, I’m an organizer for Hacking Health, which is a global movement bringing together healthcare professionals, technology gurus and designers to solve frontline healthcare problems. I’ll be part of the team redoing their entire web platform.

Gabby – I will be moving to Toronto to work in a software development shop as an intern for four months to improve my skills as a web developer. I will also be returning to Vancouver in the future to finish my non-tech degree as I also have interest in other fields/combining them!

Ting – I am doing a paid internship at a web dev shop.

Why did you change to a tech job?

Andy – I love being in the tech sector because it feels like there are new problems to solve every day. You use the same set of tools each time, but the puzzle you face is always changing. It is very much like puzzle-solving, I think. I’ve found that people in this industry are real go-getters, and I value the autonomy and flexibility that comes with having a coding background. It’s an industry that’s always learning and growing, never satisfied with the status quo.

Gabby – It was always a field I wanted to explore, I’ve always kept up to date with the hardware side of tech, building my own rigs. I just have too many hobbies!

Ting – A tech career was my original goal since high school. I started on a CS degree in university back in the late 90’s, before deciding to explore different options and changing my major. I spent roughly a decade exploring and realized that tech was my home.

Was the transition easy? Hard?

Gabby – The transition was easy for me, I enjoy the feeling of problem solving while coding!

Ting – I am on the slow side as a learner to be honest, so any major transition is never easy for me. Thankfully I had a little tech background to begin with.

Andy – Lighthouse Labs made the transition really smooth and easy. After moving to a new city, I had found a placement in about a month’s time. Their alumni support is really good, and I can still speak to my peers or instructors whenever I come across an issue I need more help solving.

What would you say to someone thinking of making the switch to tech/web design/mobile app design?

Gabby – I would say give it a try, especially through Lighthouse Labs or any other reputable bootcamp. The hours are long but I feel it’s a love/hate thing and you will find out quickly if it is for you. Which is the main reason I chose Lighthouse Labs! I didn’t want to invest a lot of time and effort learning by myself or switching degrees so I decided I would invest some money and two months of my time instead with a focus on learning and finding out if it is for me.

Ting – It is a great time to be making the switch. People in this industry are happy to share their knowledge and help solve others’ problems.

Andy – I would encourage them to dive into some self-learning at first – HTML, CSS, basic Javascript. Just to see if they like it, because it requires a certain type of thinking and doing. From what I’ve seen, those who flourish as programmers love what they are doing, and those who struggle are the ones trying to force themselves to like it.

For more information on how to get yourself into the tech industry, visit the Lighthouse Labs website.

A couple months ago, we featured Lighthouse Labs, Toronto’s newest coding bootcamp. We learned how they’ve set themselves apart in Toronto […]