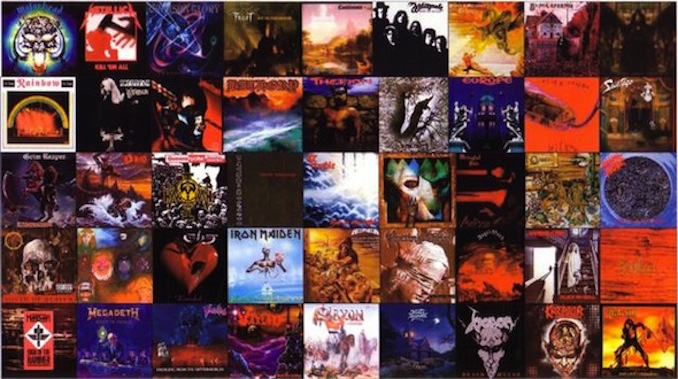 This piece has a twofold purpose. First, I thought it might be fun to expose my process a little bit, as the way I go about music reviews is something that I developed for myself rather than learned. Secondly, am writing this as my entry into the The How-To Issue, a project organized and curated by the fabulous Molly Templeton. As Templeton explains:

“This weekend, the New York Times Book Review ran its how-to issue, which is a rather nifty idea. The cover of the How-To issue lists eight pieces, two of which are by women. The cover reads, in part, “Judith Warner on How to Raise Your Kids” and “Kate Christensen on How to Cook a Clam.” That cover made me feel like I was in a time warp.”

In response, Templeton invited any woman who was interested to write a how-to guide on the topic of their choice, and submit it to be included in the project. This article also serves as my submission to her excellent issue.

I learned to write heavy metal album reviews (and live reviews, and conduct interviews, and write features etc.) entirely through trial and error. I have worked with several excellent editors in my two-and-a-half years of music writing who all gave me excellent feedback on the finished product and helped shape my skills, certainly, but the raw process was something I had to come up with entirely on my own. This is what I have come up with. I haven’t come across many step-by-step guides for writing album reviews in the past, so hopefully this get someone started if they’re interested in reviewing but aren’t sure how to begin.

I also want to stress that I consider this by no means the final word on the topic. You may have a completely different way of going about things, or you might find that this doesn’t work for you at all. Admittedly, my way is a bit labour-intensive. In the end, you need to follow the process that words best for you asa writer. Consider this merely a starting point, one way into the labyrinth.

I listen to an album at least three times before I really begin to write a review. Sometimes, I listen a lot more, but I have never felt like I have been fully comfortable putting a review together without three complete listens. Often, I’ll also go back over any album highlights or specific songs I intend to discuss int he review for multiple listens.

Also, I find it is beneficial to listen to every record under a number of different conditions and with different variables. The listening experience can change very dramatically depending on how you choose to listen to a record, especially metal, which is often very visceral and energy-driven. I recommend listening to a record under some combination of the following circumstances:
– through headphones
– on speakers in an open room
– while sitting still and doing nothing but listening
– while doing something physical, such was walking or jogging
– in the background while you are distracted or working

On each of your 3+ listens through an album, take notes. They can be associative, even poetic at this stage. Just record your impressions.

I cannot advocate strongly enough how important it is to do research on any band you are writing about, even if the final piece is a short review. You can invaluable perspective on the album at hand and a deeper appreciation for the artist and the album as a whole. Be sure to visit all of the official pages associated with the band you’re reviewing, including their web page, social media pages, and record label website. Read any and all press releases, news stories and recent interviews that you can find about the album. Make sure you have an accurate and up-to-date bio, either online or that has been sent to you by the band or their PR representative, so that you know who is on the band’s current line-up and who performed what on the album. Explanations of the album’s concept and studio updates are particularly valuable as well.

I usually start to put my research together after listening to the album in question for the first time. I like my first listen to be as clean as possible (especially if I am unfamiliar with the band), with minimal preconceptions. After that, I let my research colour the listening experience.
The only research I would not recommend that you do is read reviews of the same album by other critics. It is important that you form your own, genuine opinion about an album and stand by it. You may end up loving a record almost everyone else hates or vice versa. That’s totally fine. Don’t be swayed by the opinions of others until you have formed your own.

The actual writing process is probably the most nebulous and hard to pin down stage of the whole thing. Every review comes together differently and has it’s own feel and rhythm. However, there are a few points I always try to hit in my reviews:

Basic biographical information to put the band and record in context, and to act as a guide for readers who may be new to the band. Is this the band’s debut album or their tenth? Were they formed a year ago or twenty years ago? Where in the world are they based? Has there been a lineup change or similar dramatic occurrence in their recent history? Is there a news point that might be worthy of mentioning?

Explain what the band sounds like. Contextualize them within a genre or combination of genres. Name their influences and collaborators. If the record is genre-defying or convention breaking, explain what genres or traditions are being subverted and how.

Identify, to the best of your abilities, the band’s intent with the record. Explain the concept and major themes. Pinpoint what they were trying to do and if they were able to execute their plans successfully.

Examine the record’s most dominant features. Analyze the aesthetic choices that characterize the album the most. Point to what stands out, what are the most obvious features, both strengths and weaknesses.

No matter what publication you are writing for, they will have submission guidelines. These writing instructions will range from simple word counts to relatively sophisticated instructions about style. They will also include any additional information that your editors expect to accompany you review, such as the release date, links to the record label’s website, or album cover images. Whatever those guidelines are, be sure to always stick to them. This will make your editor extremely happy.

If your piece is destined for your own blog rather than a larger site, develop a set of guidelines of your own. Establish a consistent format for the reviews that you write, presented in the same way with the same key information each time. Give yourself a word count range and stick to it. The more consistent your reviews are, the more professional your blog will look.

For the love of all that is unholy get a copyeditor. I read over my work a bazillion times, but unless I get someone to check it for me the final product will be riddled with typos. You simply cannot see mistakes in your own work as well as a fresh pair of eyes can. Make sure you have someone you trust (who also happens to have an excellent grasp of spelling, grammar and good writing in general) go over all of your work before you submit it or upload it.

Also, be sure to re-read any work that you have sent to a copyeditor before sending it in to be published. Not only will looking at the changes the editor made help your writing improve (as you will see the way they make lines smoother and sleeker, and the writing flow more easily), you will also be able to catch any changes or insertions that you don’t agree with. Now and again a copy editor may change a line in a way that changes the sense too, and you might not want this, or they may have misinterpreted what you were trying to say (especially if the writing was unclear to begin with). Make sure you are happy with the final product before you send it on.

It is not only up to the publication who is running your review to make sure that an eager audience reads your review; you also play a role in this. When your piece runs, be sure to post links on your social media feeds. If the piece is running in print, use the same channels to encourage your followers and friends to pick up a copy of that publication. Catalogue your writing on your website, so that fans of your work can find your other publications and links easily.

Also, stay engaged with your readership through social media, comments, blog responses and other channels. When someone retweets or praises your piece in your feed, thank them! If someone has a question about something you wrote, answer as fully and thoughtfully as you can. If someone takes the time to articulate a response or rebuttal to a piece, be sure to write back in some way. You want to encourage feedback and active engagement from your readers as much as you can.

Finally, be sure to send links of your reviews to record labels, PR representatives, and any other invested parties who will be looking for and interested in your review. Not only may they choose to excerpt your review in a press release, but they will also help circulate your work and gain you readers.

While I am sure this is true with any genre of music, metalheads in particular have extremely strong, sophisticated opinions about what they like and why. It is entirely possible that someone who reads a review is going to disagree with something that you wrote and, because this is the internet, they are very likely to respond, and sometimes at length. Some responses, whether they be attacks on albums you likes or defences of albums that you didn’t like, can be vitriolic.

It is important that you pick and choose your battles, as well as when and how you respond very carefully. Someone who it criticizing your response may very well have a very valid point, and in listening to their criticism you might be able to start a valuable conversation or at least learn something and improve your writing through the experience.

For example, my review of the latest Gojira album, L’Enfant Sauvage, garnered quite a bit of criticism from readers who felt it was either rushed or that I spent too much time talking about the way I felt about the record. After taking in the criticism and considering it, I realized that I had, in fact, rather fangirl-ed out over the record rather than explaining my opinion in as much detail as I should have, and as a result my review was weaker than it should have been. My fondness for the band led to me being less intelligent than I should have been. This feedback was a valuable lesson and improved by writing.

However, some people are just going to flat-out disagree with you. Hopefully, you can simply respect each other’s opinions and move on. Other times, however, some readers may emerge from the darker corners of the internet who just want to start a fight with you, call you out, or even become offensive. In these cases, it is perfectly alright to step away from the conversation, and leave it at that. When the trolls come out, don’t read the comments section any further.

This concludes my guide on how to review a metal album. If you have any questions about the finer points of my process, I would love to answer them!