In honour of global eminence, four Filipino-Canadian luminaries were recognized for their extraordinary efforts in the community. Coordinated by the Filipina Leadership Global Summit, the distinguished group of women have all left their mark in their respective fields and in the international workplace. The key highlight of this annual summit is the acknowledgment of the “Most Influential Filipina Women in the World™” with a focus on changemakers who are making a positive impact in their local community. 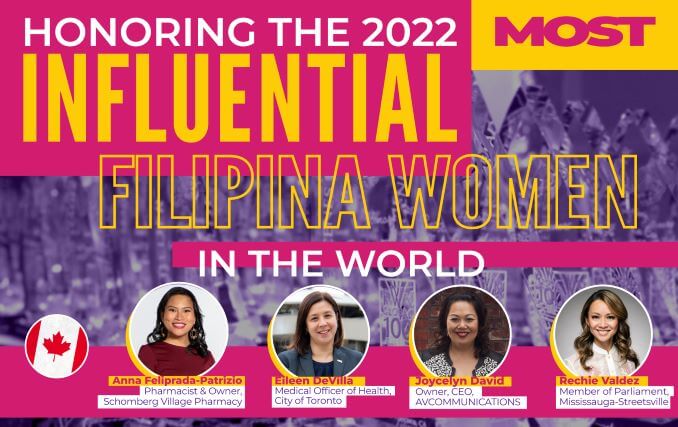 Among the awardees are Dr. Eileen de Villa, the Medical Officer of Health for the City of Toronto;  Rechie Valdez, a Member of Parliament for the riding of Mississauga—Streetsville and the first Filipino woman elected as a Member of Parliament in Canada; Anna Patrizio, a pharmacist and an entrepreneur who co-owns and manages the operations of an independent retail pharmacy in York Region, Ontario; and Joycelyn David, the CEO of AV Communications (AVC) and a well-known full-service multicultural marketing agency and the only Filipina-owned firm of its kind in Canada.

The Global FWN100™ Award celebrates influential women who are pioneering leaders, influencers, policymakers, and public figures. These remarkable women have risen to a top-ranking positions in corporations and non-profit, and government institutions in Africa, North America, South America, Asia, Australia, and Europe.

Held this year from October 30 – November 2 in Lisbon, Portugal, the award announcement comes as the United States celebrates Filipino American Heritage Month which is observed annually in October. Also, it is worth noting that last June a Brampton, Ontario Park was renamed in honour of Philippine national hero Dr. José Riza during the celebration of Filipino Heritage Month.

Also given the rise in Anti-Asian violence in Canada, the significant month is dedicated to not only recognizing the contributions of Filipinos but coming together to address hate crimes present in the Asian community. Filipinos are the third largest ethnic group in Canada and continue to play a significant role in healthcare and key industries across the country. Their unique accomplishments are impossible to disregard.

In addition to celebrating the phenomenal achievements of the thought leaders, these phenomenal women have gone above and beyond to champion innovative projects that benefits the lives of people. As forward-thinking leaders, they continuously set the stage for leading initiatives that drive impactful change. Known for bringing together Filipina women business owners and professionals from around the world, the Summit fosters a networking pipeline to strengthen valued relationships.

Initially founded in the United States at the 2006 Filipina Leadership Summit, the notable conference has grown to become a renowned forum. From working for the greater good, reaching inspirational heights around the world, and using their influence to mentor aspiring professionals, all four women have shown resilience in giving back to the next generation leaders.

Get to know the remarkable women:

Dr. Eileen de Villa leads Toronto Public Health, the largest local public health agency in Canada, which provides public health programs and services to the nearly three million residents of Toronto. She has authored and presented research on issues including public health considerations for city planning and emergency preparedness, communicable disease control, and public health policy development. Since 2020, she has been leading the public health response to the COVID-19 pandemic in Toronto and advised Toronto’s municipal leaders and Torontonians on effective tools and information they need to keep themselves and others safe.

Also, Rechie Valdez was elected to office in the 2021 federal election, and ever since then has supported and advocated for approximately 118,000 constituents in Mississauga—Streetsville. Before getting elected, she was an entrepreneur, previously worked in corporate banking. Additionally, contributed to philanthropic causes and was a not-for-profit leader.

Anna Patrizio manages the operations for Schomberg Village Pharmacy and has used her experience to build her business acumen and refine her skills on efficient operations, administration and building profitable stores. A recipient of the Dean Epifania Plana Excellence Award for Escolarian Entrepreneur Pharmacist, she is an acclaimed pharmacist that has worked on instrumental initiatives that include spearheading the Tagalog language Flu Vaccine Campaign where she provided the translation for the campaign poster. She worked on another major campaign, the “Spray Don’t Delay” Program, an opioid overdose campaign where Schomberg Village Pharmacy took part as a pilot store. She continues to also participate in impactful university research and feasibility studies as a test ground.

While Communications pioneer, Joycelyn David leads a one-of-a-kind multicultural marketing agency that amplifies the voices of immigrants in their community, and likewise helps brands advance their mainstream multinational consumer base, products, and services in a beneficial way. Still making a mark on the world, Joycelyn has maintained stable accomplishments managing AVC and its sister brands DAKAL Digital, a digital marketing agency, and Digital Avenue East, a media agency that specializes in Chinese marketing with special focus on WeChat advertising.

In a world where it might seem unimaginable for women to shatter glass ceilings or move up the corporate ladder, these career women demonstrate that massive progress is possible. Awarded in distinct categories, the career women have become a groundbreaking force and continue to blaze the trails in their appointed professions.

The largest and longest running Islamic (Muslim) Conference in Canada, the Jalsa Salana, takes place this weekend in Toronto. The […]