The story goes that James O’Neill, actor father of Eugene O’Neill, felt “trapped” by the role of the Count of Monte Cristo, which he originated in an 1883 stage production so wildly successful that he’d go on to play the same role for another thirty years and some 6,000 performances. If we are to believe the fictionalized version of James which appears in his son Eugene’s Long Day’s Journey Into Night, the elder O’Neill spent the latter part of his life alternatingly glorying in and lamenting a fate that made him wealthy but typecast him as one increasingly wrinkled and tired 19th century rebel nobleman.

Twenty-five years later, it would be interesting to know whether Ted Dykstra and Richard Greenblatt have as complicated a relationship with their uniquely successful play/shared memoir 2 Pianos 4 Hands, on now at the same Royal Alexandra Theatre where I first encountered it some twenty-four years ago. As of 2022, Dykstra and Greenblatt have been performing as “Teddy” and “Richard”, two talented Canadian kids learning to play (and love) classical piano, for more than a thousand performances.

Seeing them back together again, they certainly appear to be having fun, revelling in audience laughter they can see coming from a quarter century away. Plus, they’re obviously grateful for the money: Greenblatt, a theatre director of some note, and Dykstra, cofounder and co-artistic director of Toronto’s tiny but exciting Coal Mine Theatre (which can accommodate, at most, ninety people), are both stalwarts of a Canadian theatre scene not exactly known for making millionaires out of its stars. But 1,000-plus performances and twenty-five years is a long time, and I admit that I approached the revived 2P4H with a certain amount of trepidation. 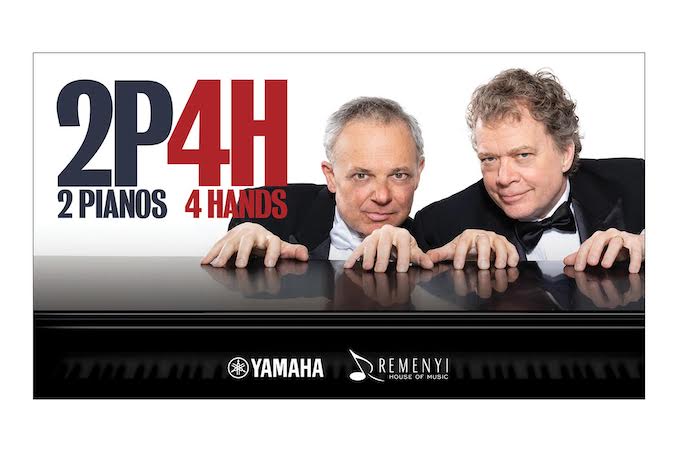 If Greenblatt and Dykstra made 2P4H today, it would almost certainly debut as a Fringe show. The Toronto Fringe has become something of a proving ground for shows that start small, pick up steam, and eventually snowball into something so wildly successful that they accomplish that rare Canadian feat: going Big in the USA. Don McKellar and Bob Martin’s 1999 Fringe production The Drowsy Chaperone eventually ballooned into a Broadway behemoth that scored five Tony Awards. We can thank Ins Choi’s Fringe hit Kim’s Convenience for paving the way for Simu “Shang-Chi” Liu. The recent Boy Falls From the Sky hasn’t made it south of the border (yet), but it too started life as a Fringe show before Mirvish Productions turned it into a major theatrical event.

Like Boy Falls From the Sky and The Drowsy Chaperone before it, Dykstra and Greenblatt’s 2P4H is a celebration of a particular art form that the show itself embodies. But where Boy and Chaperone are musical odes to musical theatre, 2P4H is all about classical music. Specifically, it’s a showcase for two decently talented amateur pianists who, decades ago, begrudgingly took up piano at their parents’ bidding, eventually growing to love their chosen instrument and aspiring to careers as professional musicians. It’s not a spoiler to say they didn’t make it, but their retelling of that story, which follows Teddy and Richard from the ages of about six to seventeen, is consistently funny, occasionally moving, and full of wonderful excerpts of works from across classical, jazz, and popular music.

For the most part, the 2P4H of 2022 is the same show that debuted at the Tarragon Theatre in 1996. It still consists of two men sitting at two grand pianos. It still serves as a celebration of the highs and lows of musical performance and practice. Structurally it remains the same, with Dykstra and Greenblatt taking turns playing their childhood selves at the piano, with the other actor stepping into the role of the parent, teacher, or adjudicator required by the scene. Once in a while, the characters Teddy and Richard interact directly, as in a hilarious Kiwanis Festival duet performance of Grieg’s In the Hall of the Mountain King, or in a later scene where they get drunk and marvel at the genius of Vladimir Horowitz.

2P4H follows Teddy and Richard as they argue with parents, concoct schemes to avoid practicing, deal with oddball teachers, compete at the dreaded Kiwanis Festival, fall in love with Bach and Mozart, amuse themselves with musical digressions into Elton John, Jerry Lee Lewis, and Billy Joel (much to the indignation of the adults around them), and eventually confront the fact that they will not actually succeed as professional pianists. Again, none of this is a spoiler: there’s a reason why Dykstra and Greenblatt are here on the Royal Alexandra stage (and in the West End, and Tokyo, and Off-Broadway, and dozens of other locations over the decades) and not in concert at Roy Thomson Hall. They’re actors, writers, directors – some of the finest in Canada – but they never did make it in the classical world.

2P4H is very funny. Those who have ever suffered through mandatory practice time (“but the guys are all out playing hockey, Ma!”), sat through an interminable day of “sixty-seven kids all playing the same piece” at a music competition, or quivered in fear in a Royal Conservatory audition room, will respond immediately to the incidents recreated here. Even those who never studied music will likely nod and laugh along in sympathy with Teddy and Richard’s experiences: the arguments with overbearing parents, the deal-making with said overbearing parents (“Dad, promise me you will never try to help with homework again!”), the moment of realization that a hobby could blossom into a career, and, for most of us, the subsequent moment when you realize it isn’t meant to be.

The first half of 2P4H remains the best, and funniest, part of the show, although it’s in the second half that we get its show stopping number.

Act I is all about the early days: learning to play the piano, practicing at first lazily and then with some degree of commitment, carving out identities as two seriously nerdy music nerds. Adult actors playing kids is always a tricky endeavour, but Dykstra as “Teddy” and Greenblatt as “Richard” never descend into caricature, even as they capture the youthful and occasionally annoying energy of a couple kid piano players who would rather be out playing hockey. Highlights of Act I include the aforementioned Kiwanis performance, their arguments with an ever-changing roster of teachers, and the riotously funny practice session in which Teddy and Richard, teaming up to practice Mozart’s Sonata for One Piano, Four Hands in D Major, do everything they can to annoy and distract one another.

Act II hardly lacks for laughter, though it does turn ever so slightly darker, as Teddy and Richard come to realize they will never be professional pianists. Hence, a (very funny) scene built around a bar patron drunkenly insisting that lounge pianist Richard (now a teenager) perform Billy Joel’s “Piano Man”, or the parallel audition scenes in which Richard and Teddy are devastated by the harsh words of critical conservatory examiners. One gets the feeling that these scenes, which each allow Dykstra and Greenblatt to inhabit the role of dream-destroying adjudicator, are a form of exorcism for the two performers. Act II also features the show stopping “Medley of Pop Tunes”, during which Greenblatt and Dykstra relieve stress by blasting through a string of amusing musical references, from the Mr. Dressup Theme to “Heart and Soul” to a crowd-pleasing “Great Balls of Fire” riff that somehow never gets old.

Speaking of getting old, one thing that has changed about 2P4H is the performers themselves. Dykstra and Greenblatt remain as energized and committed as ever, but the receding hairlines and gray hair do suggest that this Teddy and Richard are different from the ones who first showed up on a mid-90s Toronto stage. For one thing, they’re now aware, much like their audience, that even though their piano careers never amounted to anything, the story of those careers has been hugely successful. It adds an odd sort of metatextual layer to the show, and it’s also probably why they seem to still be having fun; the 25th anniversary of 2P4H is, if nothing else, a justification for all those childhood years given over to that great big black-and-white instrument.

Inevitably, 2P4H feels less fresh than it once did. A show this finely honed is more or less guaranteed to deliver big laughs, but it also no longer feels spontaneous. It’s a bit like seeing a classic rock act decades later; Elton John played a mean “Bennie and the Jets” when I saw him a few years ago, but it was a “Bennie” that he had performed thousands of times, and it occasionally showed. 2P4H doesn’t really suffer from any distracting staleness, but aside from one or two updated references – like the shout-outs to Minecraft and “smartphones” – it’s striking how little has changed. And really, some aspects of the show could use an update, including a few dated musical references during the pop medley, and some jokes that rely on tired stereotypes that were already boring/lazy back when this show debuted.

Thankfully, there’s still a hint of the improvisational or even experimental in 2P4H‘s opening piano duel – that’s duel, not duet – consisting of ten straight dialogue-free minutes in which Greenblatt and Dykstra perform a medley of familiar classical themes, gamely and comically trying to one-up one another at their respective pianos. A quarter century later, the choice to launch a comedy show with ten minutes of classical music remains an interesting one, which both respects and rewards the audience each and every time 2P4H is performed. Credit to Greenblatt and Dykstra – “Richard” and “Teddy” – for their technical proficiency, their belief in the power of music, and their ability to win over audiences, twenty-five years and running, with this little story of a lifetime tinkling the ivories.

“A Day in the Life” with Toronto Creative Ophira Calof

Ophira Calof has said of herself that in her spare time, she can be found pressing the “continue playing” button […]

“A Day in the Life” with Canadian pianist Eve Egoyan

Eve Egoyan is intensely curious, and that gets her into all sorts of trouble. She will eat just about anything, […]