Toronto doesn’t see much in the way of artist residencies – and no, Gordon Lightfoot’s standing invitation to just, like, hang out at Massey Hall whenever he feels like it doesn’t count.

But it’s fitting that, for the first major residency of 2021, Canada’s own Leslie Feist is dropping by Meridian Hall for the next couple weeks. At eighteen straight shows, two per day, Feist’s Multitudes is obviously different from your standard concert tour. But then everything about Multitudes is unusual. 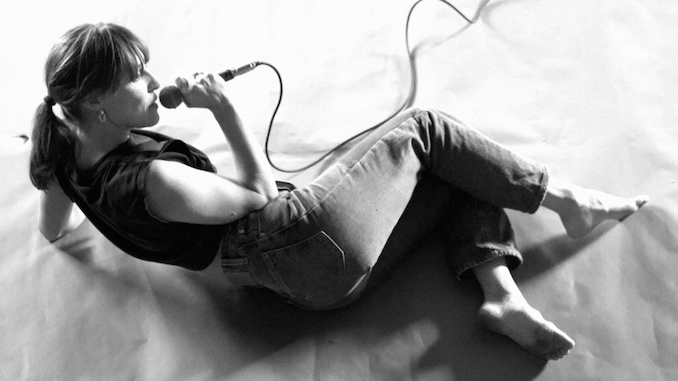 Conceived as an intimate but COVID-safe musical experiment, Feist welcomes audiences of no more than 150 to the backstage at Meridian Hall. Chairs are arranged in a circle around Feist and her (very small) band, for a mostly acoustic set of brand-new music. Feist has said the songs were all inspired by the past pandemic year, and celebrating the joy of once more gathering in a performance space. It was evident on opening night that Feist, along with her collaborators Todd Dahlhoff and Amir Yaghmai, were just happy to be there, in a very earnest, non-cliché sense.

As for that new music, it’s what you’d expect of a singer-songwriter known for her high, breathy voice and affinity for Blossom Dearie. Highlights include the show’s opening number, “After After Party,” evoking a certain wistfulness not only for the days of after parties, but for the days when we were cool enough to be invited to them. “Redwing” and “Rings Off” both have a bit of jazzy fun, while also introducing Multitiudes’s multimedia gimmick: a roving video camera, its feed projected on both walls of the stage. The cameraman clearly had a blast, alternating between filming Feist, the audience, and a number of carefully placed props: mirrors, a bouquet of flowers, and some kookier items. At least one of these generates the show’s biggest laugh, playing on the audience’s desire to peer into the lives of strangers. The camera also deploys some groovy effects, the best of which are strongly reminiscent of Michael Jackson’s “Rock With You” video.

One thing Multitudes is not, is a Feist concert in the traditional sense. There’s no counting to 4, and there’s nary a Broken Social Scene number in sight. For some, that may be disappointing. But others will appreciate how amazing it is that Toronto gets this signature performance from an internationally acclaimed artist. We don’t know if Regina Spektor is doing something similar down in New York City. Frankly, we don’t care. New Yorkers should be jealous of us.