Toronto’s Chilina Kennedy returns home recreating her Broadway role in the Tony & Grammy Award-winning Broadway hit BEAUTIFUL – THE CAROLE KING MUSICAL. Kennedy, will join the first national tour in this exclusive encore engagement for Toronto, April 9 to  May 5, 2019 at the Princess of Wales Theatre.

BEAUTIFUL is the inspiring true story of one woman’s remarkable journey from teenage songwriter to the Rock & Roll Hall of Fame. From the string of pop classics King wrote for the biggest acts in music to her own life-changing, chart-busting success with Tapestry, BEAUTIFUL takes you back to where it all began – and takes you on the ride of a lifetime. Featuring over two dozen pop classics, including “You’ve Got a Friend,” “One Fine Day,” “Up on the Roof,” “You’ve Lost That Lovin’ Feeling,” “Will You Love Me Tomorrow,” and “Natural Woman.” 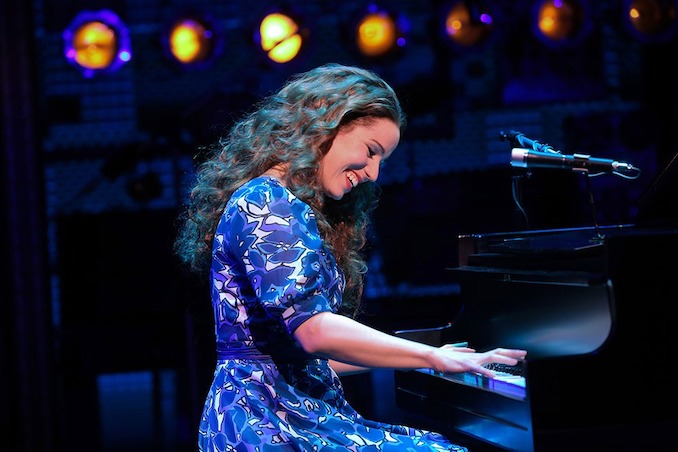 We had a chance to ask Chilina Kennedy more about her role and the icon she plays.

For those who didn’t grow up listening to Carole King, what should they know about her and her music?

CK: The first thing I would tell people is that she wrote many of the massive chart topping hits we all know and love like Will You Still Love Me Tomorrow and Natural Woman. Gloria Steinem credits her as the first woman to give a downbeat.

Beautiful is still going strong and the fan base is loyal. Do you have an unforgettable response from a fan?

CK: I have so many! Any time a fan tells me where they were when they heard a Carole King song or what a particular song meant to them in their life, it’s very special. I’ve experienced patrons with tears in their eyes at the stage door telling me how much the show meant to them and helped them through very sad times in their lives. The audience repose to this show is powerful.

What advice did Carole King give you?

CK: She really taught me how to play the piano like she does. She sat me down and we went through her use of the pedal, her left hand and how her body engages completely with the music. Also, we’ve had some wonderful talks about forgiveness. She’s an incredible woman.

Tell us about the song Beautiful.

CK: It’s one of my favourites. It contains one of the most important messages of the show – to wake up every morning with a smile on your face and show the world all the love in your heart.

What’s your favourite song to perform and why?

CK: I love Natural Woman because it comes at a moment in the show when Carole is coming into her own, owning her voice, her career and her life. It’s also just a fantastic song.

Now that you’re back in Toronto, what are you most looking forward to seeing/doing?

CK: I can’t wait to see friends and family and to have time to walk around Kensington Market, St Lawrence Market and the parks. Also, I’m excited to eat at the Senator and at the restaurants along King St. The Fat Belgian is another favourite from the old days!

You’ve also started your own Theatre company? Can you tell us more about that?

CK: Yes! Being in Toronto will give me some time to focus on our upcoming projects. We just launched the company with a sold out concert production of Kiss of the Spiderwoman at the Don Jail. I’m very proud of it! Looking forward to the next one!

With a book by Tony® and Academy® Award-nominee Douglas McGrath, direction by Marc Bruni and choreography by Josh Prince, BEAUTIFUL features a stunning array of beloved songs written by Gerry Goffin/Carole King and Barry Mann/Cynthia Weil.  The show recently celebrated its fifth anniversary on Broadway at the Stephen Sondheim Theatre (125 West 43 Street), where it has broken all box office records and is the highest grossing production in the Theatre’s history.

Beautiful: The Carole King Musical offers an unforgettable playlist of a whole generation

THE BAND’S VISIT tells a story, set in a town that’s way off the beaten path, of a band of […]