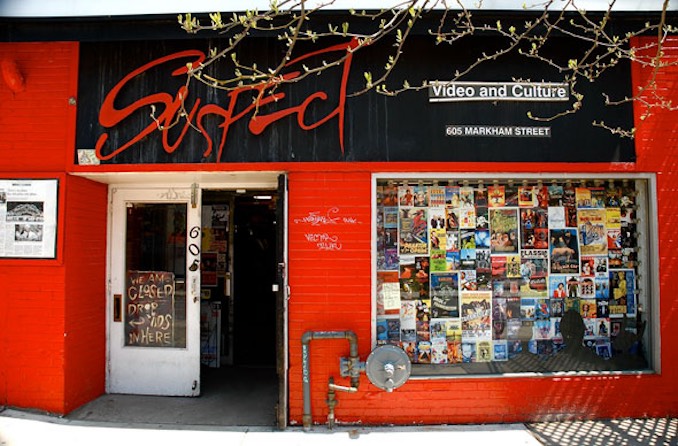 When I was a kid, Videoflicks was my temple. Located a few blocks north of Lawrence on Avenue Road, it had a way more comprehensive selection than Jumbo Video and certainly more than Blockbuster. With a few dollars in my hand I’d be off to explore their endless shelves, taller than myself, that stocked all manner of foreign, classic, and contemporary film. I would stand near the entrance, carefully studying the price board, and looking for the best way to maximize the amount of rentals I could take home and devour. Through Videoflicks I had some of my earliest and most potent cinematic experiences. Films were my friends and teachers, exposing me to thoughts and ideas far above my head. Those were the days of loitering among the “staff picks” and unwittingly leaving my mom waiting in the car for 45 minutes while I munched free popcorn and carefully selected which films would be mine.

As teenage and early adult hood consumed me, I made an unconscious decision to renounce my faith in the video store. With access to private trackers, who had everything from the entirety of mid-century European cinema, to the most obscure and unavailable video art, the video store fell from favour. Of course, much like the difference between watching a film at the theatre and watching it at home, going to the video store is an experience in and of itself. Now in my late 20’s I find myself drawn back to physical media, and appreciating it the way I used to.

As I no longer live north of Lawrence, Suspect Video in Mirvish Village has become my new go-to. That may change in the coming year with the sale and possible demolition of the village. For now, Suspect Video is the place to be for take-home film culture and ephemera.

Opened in August of 1991, Suspect Video has been a staple of Mirvish Village for 25 years. Their entrance is cave-like, with black bricks and a front window chaotic with horror-themed t-shirts. Wall to wall titles greet you upon entering. The store has, at once, the feeling of some nerd’s basement, and that of a carefully curated collection. “Everything is here for a reason,” says owner Louis Ceriz. Niche genres along with big name directors from all over the world are lovingly labeled and easy to find. If you can’t find your film, one of Louis’ cheerful, film-literate co-workers is happy to help, and offer recommendations.

What really separates Suspect Video from Videoflicks, or even Queen Video, is their special attention to underground and obscure content. “We always sell the strange. To say we are more selective is a little snobby but we are more selective because we have a concise focus and we sell a lot of stuff other places don’t. Initially we would carry anything that was counter culture or antiestablishment. We had a whole shelf about different film movements. The horror stuff slowly took over”.

Glass pillars filled with collectables and rarities dot the store while a shelf filled with local books, magazines, and graphic novels fills the left hand wall. It’s easy to get lost at Suspect. While there is no free popcorn, I have often found myself wandering for upwards of half an hour, trying to find just the right film. Unfortunately, few people who renounce physical media ever come back, and may only darken the doorstep of Suspect if they forget to pay their Internet bill.

While Louis readily admits to consuming documentaries on Youtube, the people of Suspect Video have a serious problem with online film culture, and Netflix, in particular. Christened “Netshit” on the Suspect website, Louis is a strong believer in not leaving one’s viewing pleasure up to an ephemeral data cloud of woefully limited content. For Louis, in much the same way that music has reverted back from the album to a singles-based listening culture so has Netflix thrown us back to a time when television options were limited. “Others have talked about the increased apathy of people. I know there are a lot of film fans out there but I think there are less of them. [There is] the illusion that, with Netflix, you have a lot of choice. You really don’t. It’s become very much like when there was only [broadcast] TV. You come home, you’re tired, you turn the TV on, and you don’t care what’s on as long as it’s something.” Perhaps Louis and co would not dislike online video culture if it were an alternative to video stores, rather than a stake to the heart of Suspect and other businesses like it. “We noticed it affecting us about 4 years ago. Rentals went down, but sales stayed consistent. It [sales] wasn’t enough to offset. We make more money renting.”

Unfortunately, next to the impeding restructuring of Mirvish Village, Netflix and its ilk seem like a mere fly in the ointment. Louis is cautiously optimistic but ever the realist about the fate of his storefront. “The development company takes possession on January 1st, 2017. They haven’t told us much but I imagine they will want to demolish as quickly as possible. We’re looking for another storefront but we probably won’t be able to find anything affordable.”

In the name of progress, one of the last bastions of Toronto film culture may disappear, but it’s not the end for Louis. “We started our own horror convention. If we can’t find a place that’s affordable I’ll focus on our online business and conventions.” Now a father, Louis no longer has the young man’s drive to fight for his brick and mortar store but Suspect Video will invariably survive online. Even so, Louis is sad to think what may happen to Mirvish Village in the coming year. “It’s a unique little street. It’s taken for granted, and I take it for granted as well. Every so often I’ll be down here, especially in the evenings with the lights… For Toronto it’s very unique. It’s like a little slice of Montreal or New York City. It’s really cool, but it won’t be that anymore.”

“A Day in the Life” with Toronto-based actor Jordan Pettle

I’ve been writing this profile of Toronto-based actor Jordan Pettle in fits and spurts, while making dinner, riding the subway […]

“A Day in The Life” with Choreographer and Dance Film Director, Allen Kaeja

Allen Kaeja is an award-winning Choreographer (over 200 works) and Dance Film Director (35 films). Allen is Co-Artistic Director of […]